March Of A Truce Phalanx

Musharraf feels the jehadi heat, visibly, and extends a conciliatory hand to India 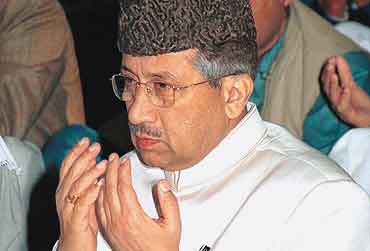 outlookindia.com
-0001-11-30T00:00:00+0553
Pakistan's burly PM Mir Zafarullah Jamali was the first to hint at the momentous event waiting to happen. At his press conference on Tuesday afternoon, he said, "President Musharraf and Prime Minister Vajpayee have the master key." The master key, in fact, had been taken out hours earlier at the time A.B. Vajpayee made a telephonic call to Pervez Musharraf. Both leaders agreed to issue a joint declaration, which was subsequently made public by the Indian external affairs minister Yashwant Sinha.

Vajpayee chose to quietly fly back to India. But Musharraf could barely conceal his relief over the joint declaration. "History has been made as Pakistan and India have reached an agreement. That phone call sealed the final deal," Musharraf told some 200 journalists at the President's House. "I was a disappointed man at Agra and today I am a happy man," he added.

But the joint declaration has kicked off a couple of questions: by reassuring Vajpayee he wouldn't allow terrorists to use Pakistani soil, has Musharraf finally conceded his country's role in what he eulogised as jehad? And will the hawks in the military establishment scuttle the move towards a peace that does hold out hope of some kind of settlement of the dicey Kashmir issue?

Answers to these questions depend on three crucial factors: international pressure on Pakistan to dismantle the jehad apparatus, Musharraf's hold on the military establishment and the attitude of the Pakistani opposition to Musharraf's peace moves.

Despite US President George Bush lavishing praise on Musharraf for his role in the war against terror, most here believe Washington nudged the Pakistani military establishment into undertaking measures that ultimately paved the way for Vajpayee's travel to Islamabad. "It was primarily the increasing international pressure on the two countries which made the historic meeting possible," says Iffat Munir, a former professor of international relations in Karachi University.

International pressure, say observers, was an important reason why Musharraf wasn't ambiguous in reassuring Vajpayee on checking terrorism emanating from Pakistan; no longer was terrorism dressed as a fight for freedom. This was one big concession Musharraf made to India.

Analysts feel the December 25 twin suicide attacks on Musharraf made New Delhi more sympathetic to the view that the jehadi groups are opposed not only to the US but also to Musharraf for joining its war against terror. In other words, the Pakistani president isn't in a position to bring cross-border terrorism to a complete halt, a precondition India had earlier insisted upon before initiating dialogue.

In return, India provided Musharraf what he could sell to the people here: Kashmir. He can now hope to rally the moderate sections in his fight against the extremists, arguing he has successfully managed to persuade India to discuss Kashmir.

The Kashmir issue, obviously, is too contentious to be resolved overnight. And though Musharraf and his aides continue to predicate progress in Indo-Pak relations upon movement on Kashmir, some of them do concede to a remarkable change in Islamabad's perspective. As a senior official told this correspondent, "Fortunately, or otherwise, 9/11 brought about a paradigm shift in Pakistan's Kashmir policy. The new realities demand a strategy different from the country's stated position on the issue." He referred to Musharraf's statements—relinquishing of extreme positions on Kashmir and setting aside of UN resolutions on Kashmir declaring it as a disputed territory.

As Musharraf vows to carry forward the peace process, optimism abounds that most of the military establishment is behind him. Says journalist Kamran Khan, a close watcher of the Pakistani army, "When the president is deliberating make-or-break decisions on the future, his aides and advisors are certainly attuned to the strategic realities that had dawned post-9/11." Among them are Tariq Aziz, secretary-general of the National Security Council, and Hamid Javed, chief of the general staff, whom the president praised for their role in stitching up the joint declaration. But others say Musharraf can't overnight sever the decades-old relationship between the militants and the establishment.

Adds analyst Shahidur Rehman, who has written two books on Pakistan's economy and nuclear programme: "The best thing that has happened to Pakistan since 1947 is that it was a general who had to take decisions (on India) immediately after suicide attacks on him." Observers feel India, too, has come to accept that a dialogue with the Pakistani army is the key to peace.

Significantly, Musharraf's new policy paradigm now enjoys the silent support of at least one important religious leader, Maulana Fazlur Rehman, who heads the Jamiat Ulema-i-Islam (JUI). With the JUI constituting an important segment of the Muttahida Majlis-e-Amal and dominating provincial governments in the Frontier and Baluchistan, the Maulana's support could enable Musharraf to sell his peace proposal to people other than those who support the jehadis. (Story on militant groups, P 44)

Most Pakistanis, however, believe a real progress in negotiations will be possible only after the general election in India. Says Talat Masood, a retired general and a defence analyst: "India can contribute to the success of composite dialogue by reducing and withdrawing troops from India-occupied Kashmir."

For the moment, though, General Musharraf has got the break with India that he so desperately needed to counter jehadis.

The Wine After Hemlock