Shakespeare has not got too lost in translation here 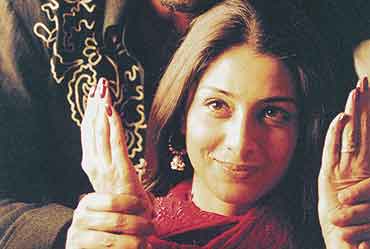 Shakespeare hasn't got too lost in translation here. Macbeth, a study in ambition and guilt, is perhaps one of the more accessible of the bard's plays. And the director and co-screenwriter, Vishal Bhardwaj, has effectively transported the essence of the story to the milieu of the Bombay underworld of our times: it's all about crime and self-punishment. Maqbool is the desi Macbeth, enacted with a remarkable intensity that at times unfortunately veers dangerously close to being over-the-top by the talented actor Irfan Khan. He is the right-hand man of the gangster boss, in a tour de force performance by Pankaj Kapoor. Nimmi is the ageing don's young mistress who eggs on the loyal Maqbool to kill him and take his place: both in the hierarchy of the gang and in her bed. Tabu manages the difficult balancing act between passion and hysteria.

Each side of this doomed triangle holds its own competently with the characters etched out quite clearly, except for the times Bhardwaj has his Maqbool teeter between Macbeth and an insanely jealous Othello.

There have been several insightful screen renderings of the underworld: Parinda, Satya, Vaastav and Company to name a few. However, this film, which is essentially a tragic love story, goes beyond gang war, corruption and the various nexuses between dons, policemen, politicians—and in this case the film industry. Maqbool wanders into the psyches of the protagonists, ferreting out what guilt and its denial does to them. Bhardwaj has a poet-philosopher's eye: some of the shots are lyrical, even the violence is aesthetically treated and is never gratuitous. What makes the film memorable is the way the director has interwoven scenes of humour into an essentially dark tale: Pankaj Kapoor cooking on the roof is one such moment. This film has powerhouse performances from most of its cast, but the scene-stealers are Naseeruddin Shah and Om Puri as Pandit and Purohit—the two corrupt cops. It was a stroke of genius on the part of Bhardwaj to metamorphose the three witches of Macbeth into these two comically dark characters. The director is also the music composer, Daler Mehndi for once does not sound like a non-stop spinning top in his rendering of the Ru-Ba-Ru number.