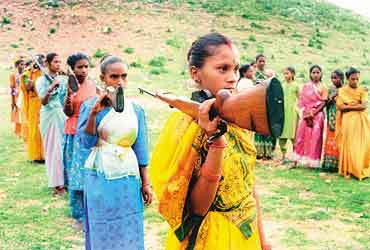 outlookindia.com
-0001-11-30T00:00:00+0553
When it was formed in the mid-’70s, the Maoist Communist Centre (MCC) was waging a peoples’ war for peasant rights. Now it is one of the most lawless Naxal groups, spending its energies fighting the police, the Ranvir Sena, a private army created by the zamindars, or indeed other Naxalites. The group is well-entrenched in Bihar and Jharkhand, with four armed squads active in Patna, 14 in Aurangabad, 13 in Gaya district and in 13 districts in Jharkhand.

The MCC is known to have links with the Maoist insurgents of Nepal, according to security agencies. What is also alarming is that the outfit intermittently joins hands with the PW. In a confidential report to the Union home ministry, the Bihar government indicated that the isi is likely to use them to sneak in arms. The obvious aim being: to destabilise the districts in Bihar close to the Indo-Nepal border.

The Nepal link has served to inflate the MCC’s arsenal, providing them with sophisticated AK-47s and self-loading rifles. The result is that violence has stepped up both in Jharkhand and in Bihar in recent years. Last year, 88 persons were killed in landmine and other armed attacks in Jharkhand. Compare this to 2000, when there were only 13 casualties. In Bihar, just four incidents were reported in 2000, whereas there have already been 25 this year. Police officials see further escalation of violence if the arms flow from Nepal is not checked.

The killings apart, it’s their gruesome ‘kangaroo courts’ which have struck fear in the hearts of the villagers. It’s a unique method of delivering justice where ‘traitors’ of the revolution are often beheaded. In fact, these people’s courts, where erring officials are brought to book, are more of a lynching arena.

All this may be in the name of justice, but the MCC itself is held guilty of exploiting the very people it promises to liberate. This is one reason why a disenchanted section of its cadre has deserted it. Ram Pujan was an active member since 1993. But he decided to quit when he realised the members of the group were actually exploiting the poor which goes against the very grain of the MCC’s ideology. "There was too much exploitation in the name of the poor," Pujan told Outlook. "Some members were even making money. I could not take it anymore, so I quit."