Many Jackals On the Prowl 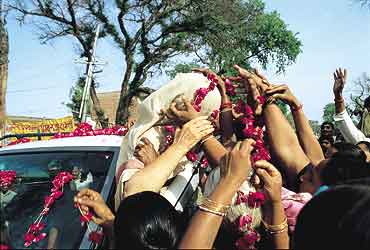 The strident xenophobic voices from some Hindu hardliners opposing her candidature over the last week forced the IB to go through an exhaustive drill detailing all the inherent dangers to Ms Gandhi and members of her immediate family. The agency felt that besides the SPG protection every prime minister has, extra precautions would have to be taken in her case because the voices against her taking on the prime ministerial job were getting "increasingly strident".

The volley of protests—starting with the outburst of the Adamar math seer, Vibhudhesha Tirtha Swamiji, exhorting his disciples to launch a second Quit India movement, to the VHP's pitch to recruit Mahatama Gandhi look-alikes and use them for "Sonia-bashing" and BJP leader Sushma Swaraj threatening to tonsure her head and drape herself in a white sari—had all the potential to gather momentum. "There is no dearth of fanatical elements in this country. Some of these motivated fringe groups can instigate individuals," IB sources told Outlook. In fact, the IB was closely monitoring all developments in the anti-Sonia campaign around the country. "We were wondering if trouble would spread after the suicide of a businessman, Mahesh Prabhu, near Bangalore protesting Ms Gandhi becoming prime minister. Luckily it didn't," says an IB official. Adds another top-ranking official: "With the decks cleared for her to take over as prime minister, the SPG top brass had been told of this new threat appraisal and this would have been unofficially communicated to Ms Gandhi."