Many Anglers On The Tigris

The coalition isn't exactly crumbling. But there are differences over dividing the multi-billion-dollar reconstruction pie. 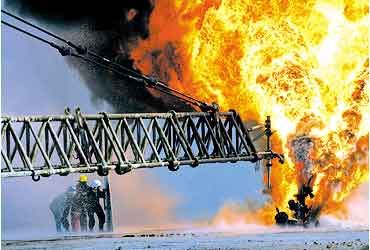 outlookindia.com
-0001-11-30T00:00:00+0553
Even as the battle for Baghdad gets into its final phase, a secondary lobbying war has broken out for lucrative projects in the post-war period. The coalition partners—the US, Britain and Australia—are having difficulty on deciding how to divide the pie. Those who opposed the war—France, Germany and Russia—are trying to ensure their firms are also part of the multi-billion-dollar contracts.

At issue is the US decision to become the sole authority to grant work. The UK's international development secretary Clare Short has countered it by saying the post-war process would be illegal without a UN mandate. Adds Nigel Peters, chief executive, British Consultants and Construction Bureau (BCCB): "The concern is that this is Kuwait all over again. Then too, Britain was at the forefront of the military effort, but lost out on the reconstruction."

Now, BCCB is due to hold talks with Trade Partners, a part of the UK's department for trade and industry (DTI). There's some support from a few US experts. A recent study by the James A. Baker III Institute for Public Policy states: "A heavy-handed approach (by the US) will only convince...the rest of the world that the operation against Iraq was undertaken for imperialist...reasons." But so far everything in Phase 1 ($2.4-billion budget) seems to be going to well-connected US firms.

The first such contract ($500 million) for putting out oil fires and emergency repairs of the oil facilities in southern Iraq went to Kellogg Brown & Root (KBR), a subsidiary of Halliburton, headed by current vice-president Dick Cheney between 1995 and 2000. During his final eight-and-a-half months with the firm before quitting after the 2000 presidential elections, Cheney pulled a salary of $8,06,332 and another $1,00,000 in benefits.

For KBR, which has started work to extinguish fires in seven Rumaila wells, the work could expand depending on its scope. Experts contend it may require $7.5 billion over an 18-month period to push up Iraq's production to pre-1991 levels. (The firm's spokeswoman Cathy Gist said there was "no conflict with KBR winning or performing government work.")

US oil majors like Exxon-Mobil and Chevron-Texaco will also gain from a coalition victory. Due to US-imposed sanctions, they couldn't bid for new exploration rights in Iraq; most of those went to Russia (Lukoil), France (TotalFinaElf) and China. Calculations show that if, as estimated, Iraq's reserves are twice the existing pool of 112 billion barrels, firms could together earn $29 billion in annual profits over the next 50 years.

Ditto for reconstruction work, where US firms are clear leaders. In mid-February, the US Agency for International Development (USAID) secretly "invited" five US corporations (including KBR) to bid for eight contracts worth $900 million. Andrew Natsios, USAID administrator, clarified this was done since "speed is of the essence in this whole thing".

There are other US players well positioned to exploit new opportunities. Ellis Environmental Group, which clears debris and removes unexploded bombs, has a current $1.2-billion worth of "open-ended contracts" with the Pentagon which are expected to double now. Companies like Kraft, which sell dehydrated meals, are set to enjoy a boom as the humanitarian effort gets under way.

Obviously, this is creating a furore. DTI's secretary Patricia Hewitt has reportedly called the USAID director to complain that British firms are being left out. That seems probable now that the US has asked Jay Garner, a retired general, to oversee the reconstruction and humanitarian work. Garner is the president of Virginia-based SY Coleman, a subsidiary of L-3 Communications, which provides services for the Patriot missile technology. Earlier, he was part of the National Missile Development Programme.

Faced with criticism, the US is dangling the business carrot in front of other nations to garner their support. Colin Powell, the US secretary of state, hinted that Turkey will be allowed to participate in post-war work since the latter decided to allow supplies to reach the coalition troops in north Iraq. The US also said British firms may become sub-contractors in the process. Still, nations like the UK and Australia, worried about its share of the Iraqi wheat market, are not enthused.

Bush's decision to send 6,00,000 tonnes of wheat as emergency aid is being viewed as an attempt to get a foothold in the market, where Australia has been supplying nearly two million tonnes of wheat every year under the UN oil-for-food programme. Australia's senior trade commissioner in NY, Geoff Gray, said he was talking to Washington to ensure a place for Australian firms.

There's one area with minimal conflict. Not many can compete with US defence firms, whose exports will zoom after the US-Iraq war. "It's the best possible marketing tool—cnn," said Tamar Gabelnick, director of arms sales monitoring project at the Federation of American Scientists. Defence consultants believe that any firm "should be able to sell (at least) three times more of any weapon system that has been proven in combat than if you haven't seen it in combat."

Post-1991 Gulf War, US weapon makers' exports doubled to $20 billion in 1993, compared to the previous year, as Boeing sold F-15s to Saudi Arabia and Israel and Lockheed found ready buyers (Egypt and Jordan) for its F-16s. This year, the demand for weapons like Tomahawk missiles (price tag: $6,00,000 apiece), and agm-154 missiles ($1,50,000) is expected to rise. The gainers: Raytheon, Boeing, Lockheed and General Dynamics.

But the euphoria amongst defence contractors is creating ripples within Pentagon's Defense Policy Board (DPB), an advisory panel of former defence officials. Richard Perle, a known war hawk, was forced to resign as its chairman (but continued as a member) last week after it was revealed that he was representing Global Crossing, a bankrupt telecom company, which wants Pentagon's approval to sell itself to Asian investors.

Perle, nicknamed "Prince of Darkness", was also charged with having lunch this January with Adnan Khashoggi, an arms dealer involved in the Iran-Contra scandal, and another Saudi industrialist. In a New Yorker article, Seymour Hersh said that Perle was trying to get Saudi businessmen to put money in his company, Trireme Partners, which invests in homeland security and defence technology.

The former DPB chairman denied these allegations. In an interview with Canadian Broadcasting Corporation, he said: "There was no conflict of interest, but it takes time for that to be sorted out." In other interviews, he trashed Hersh's charges and categorised the journalist as a "terrorist". But the Perle affair has sullied DPB's image.

Nine of its 30 members are linked to defence contractors, according to a report by the Centre for Public Integrity, a non-profit group in Washington. The companies whose boards they sit on won $76 billion in contracts over the past two years, the report said. "They have access...and they can open doors for their companies," Bill Allison of the Centre told Outlook. Well, they can also make sure that US firms earn huge profits from the war.

Seema Sirohi In Washington And Sanjay Suri In London