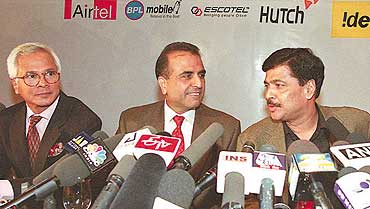 outlookindia.com
-0001-11-30T00:00:00+0553
It just gets messier by the day. In the acrimonious brawl between telecom operators, and between them and the regulator, fresh solutions immediately lead to new problems. Last fortnight was no different, after cellular firms refused to connect calls made to their subscribers by those using the WLL (wireless in local loop) technology. In retaliation, the WLL operators (including MTNL and BSNL) too refused to connect cellular calls made to their networks, and in the case of MTNL and BSNL, to landline networks, also owned by them.

Mr Customer was caught in in the middle, as for two days, cellular and basic services consumers couldn't make calls to each other. Union communications minister Pramod Mahajan, who reportedly prompted the state-owned MTNL and BSNL to hit back, flew in from Egypt and forced the warring factions to smoke the peace pipe. Even as consumers heaved a sigh of relief, Mahajan's intervention led to a new controversy. This time, the bone of contention is about how much the basic (landline) and WLL operators will pay the cellular companies for connecting calls made from their networks.

The Telecom Regulatory Authority of India (TRAI) will soon announce this rate and, probably, it will agree to an interconnect tariff of 45 paise per 90 seconds. But even before it has been announced, no one is willing to accept it. Basic operators, who have never paid any access charge, find this unacceptable. The Association of Basic Telecom Operators has expressed its opposition to the proposal in a letter to TRAI. The former feels such a charge will put additional burden on the consumers and make their services uncompetitive. Anyway, it says that the cell operators paid access charges because "they earn revenues from airtime charges that the basic guys don't". A few basic operators told Outlook that they may go to the telecom tribunal in case an access charge is imposed on them.

In turn, the cellular firms contend that the TRAI figure is too low. According to them, the access charge should be based on realistic cost of termination of calls, which is determined by network usage and infrastructure expenses. Says Rajeev Chandrashekhar, CEO, BPL Mobile, "We have submitted to TRAI a proposed charge of between 90 paise and Re 1 based on factors such as licence fee, capital expenditure and revenue share." Anything less than that might not be acceptable to the cellular firms, especially since they pay Rs 1.20 to basic operators as interconnect charges. Says Sean Dexter, MD, Spice Telecom (Karnataka), "The principle of reciprocity in termination charges has been recognised by the minister himself." Thus, if TRAI plumps for a lower rate, the cellular firms too might go to the courts.

So, brace yourself for yet another battle in the near future. But who's to be blamed for this impasse? Mahajan and TRAI blame the cellular firms. That's why the minister took the extreme step of giving his blessings to the countermoves by BSNL and MTNL. (On the record, Mahajan only said that "I was told about this and I did not oppose it".) Even TRAI had gone on the offensive and imposed a penalty of Rs 1 lakh per day on cellcos. But that didn't deter them since they believe that both Mahajan and TRAI are unfairly favouring the WLL (and basic) operators.

The cellular operators feel that government intervention was a gross failure of the regulator who had the responsibility and mandate on such issues. Says Dexter, "It's unfortunate that it has taken all this angst for what was a very logical decision. Why should the minister need to intervene when the regulator has been empowered to act on such issues?" Says another senior manager in a cellular firm, "It's disappointing that the regulator has not done things in the sequence and priority in which it should have been done.Interconnect issues should have been sorted out before issuing the licences." Adds another one, "The entire imbroglio was the creation of the people who solved it."

Whatever may be the truth, it is the consumer who has no clue as to what will happen in the next few weeks. On the one hand, they are having a good time as mobile rates are dropping, a move forced by attractive prices announced by WLL firms. But, on the other, they might have to shell out higher processing fees and service charges to cellular companies, and pay higher rates for WLL and basic services due to the new access charge regime. The bright spark: your phones will work. For the moment at least.