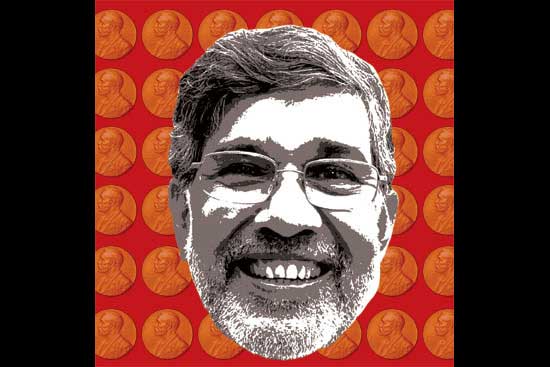 Did you know that Kailash Satyarthi is the first Hindu ever to get the Nobel Peace Prize? Mother Teresa was an Albanian-born Christian; as for the Indian by birth, Rabindranath Tagore got the Nobel for Literature, C.V. Raman received it for Physics; and Amartya Sen won the Nobel Prize for Economics.

Undoubtedly, the 2014 Nobel Peace laureate is a sincere man. In India, unforgivable abuses are done in the name of caste and social status. But it isn’t only the exploitation of children, but also the mistreatment of domestics—I will never forget the servants’ toilets in Sujan Singh Park’s luxury apartments; the exploitation of junior lawyers by wealthy senior counsel; the ruthless exploitation by politicians of their powers, etc.

Many Indians, most of them upper middle-class, were so shocked in the ’60s and ’70s by these inequalities that they left everything—comfort, riches, jobs—and whole-heartedly devoted their whole lives to redeem injustices, living in spartan simplicity. My wife’s uncle, Narender Bedi, settled with wife and kids in a pump house in a remote corner of Andhra Pradesh, and devoted his entire life to the poorest, even managing in the ’90s to release 157 bonded families in Kodaikanal.

However, this whole generation of sewa workers came with a Nehruvian bent of mind—most of them were, and still are, Marxists, the ideology they (and Nehru) felt was best suited to erase social inequalities. And though most of them are Hindus, as good Marxists they thought religion was ‘the opium of the masses’ and often turned intensely anti-Hindu. Amartya Sen set the trend, Binayak Sen was not far behind and Kailash Satyarthi has been known to aggressively oppose the RSS and Narendra Modi. Nothing wrong with Marxism, mind you, except that it failed all over the world, even in China, but is still taken as the gospel in India.

As a foreign journalist and India-lover, it shocks me that the Satyarthis  and Mother Teresas never care to balance the awfully negative image of India their fame carries with a more positive side. Yes, there are children in India who are exploited, but there are also millions of happy children. This image,  of not only poverty, but also of extreme flaws such as rape, dowry deaths, bonded labour, castes abuses, etc are clinging to India like a monstrous wart. In truth, it has been many years since India has taken off and it now aspires to go beyond caste and social inequities. Many Dalits, for instance, have become tycoons, chief ministers, even presidents. And no other country, paradoxically, worships as many women as India does. Also, there are humongous amounts of money here—the only problem is that half of it is underground.

One should also say that Satyarthi’s connections are not as clean as he claims: he is, for instance, closely associated with World Vision, a powerful Christian organisation that makes no secret of its conversion agenda. It’s a classic partnership—using Indian Marxists to pave the way for evangelism. When queried, World Vision declined to provide details of their ‘Project Rescue’ that aims to set children rescued by Satyarthi on a path ‘to Jesus’.

This must have pleased the Nobel Committee and clinched the Nobel for  Satyarthi, for Norwegians are special people who have a deep Protestant streak coupled with an ultra-leftist bend of mind. There is also an unconscious superiority complex, as in many western nations, that still wants to look at India as an underprivileged country. When I went to Oslo a few years back for a peace conference, I was surprised to see how many of the youth—many had been in India—were intensely pro-LTTE and pro-Naxalite. Someone like Satyarthi would fit well in this mould.

Yet, there are many more Indians who deserved the Nobel Peace Prize, who do charity work on a much bigger scale than Satyarthi and would have brought out a more positive image of India. There are 1.2 billion Hindus in the world, one of the most educated, law-abiding and brilliant communities—and they deserve to be recognised. I am thinking, for instance, about Swami Agnivesh, who was the Satyarthi’s mentor before the latter broke away from him. Or Shanta Sinha, who does the same work as Satyarthi in Hyderabad, but never hunted for recognition. Or the Art of Living Foundation of Sri Sri Ravi Shankar, which runs thousands of free schools for destitute children and has adopted hundreds of orphans from Kashmir and the Northeast.

So when will the NPP go to a true Hindu?

Who Will Save The Children?