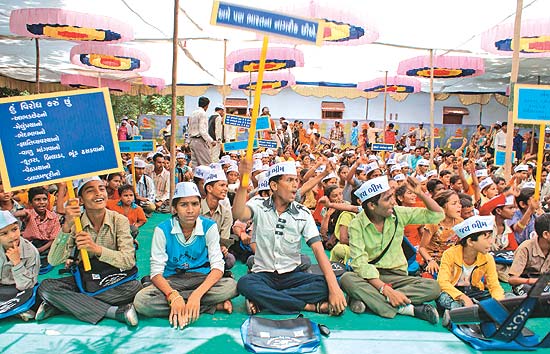 Our Kids, Their Kids

They had, it seems, come from all corners of Gujarat. From Gandhinagar to tribal Panchmahals, from Porbandar on the western coast to the Dangs at its southern tip. The children arrived at the Mahatma’s Sabarmati ashram, lining up solemnly in their new Gandhi caps. At the gates, they were welcomed with handwoven cotton thread malas by elderly Gandhian leaders.

They were children of safai karamcharis, Balmiki kids used to watching their parents sweep public streets and private homes and clean filthy toilets. The children were at the ashram to share their ‘experiences’ with a fact-finding panel, tales of being forced to clean toilets and mop floors in school, of horrific discrimination by their upper-caste schoolmates and teachers. They came to the podium in line, district by district, took the mike to tell their stories. Matter of fact, stating the facts somewhat baldly. There was no wallowing in pity, in ‘vibrant Gujarat’ this was how life was for them.

Pooja, a fifth standard student, says they are not even allowed to take water from the drinking water matka: “The kids from the ‘upper’ castes blow air and do ‘phoo phoo’ to cleanse themselves if we touch them by mistake. Or they sprinkle water on the spot we touch.... The teachers don’t want to touch our homework books. So they are never corrected. I clean the toilets. I have to. Because the teacher tells us to do it. We are Bhangis. No one in school would like to be friends with us. They say ‘Hey Bhangi door bes, (sit far away)’.”

Prakash, from Mohua taluka of Kheda district, is in the seventh standard. “I clean toilets in school.” “Why do you do this?” the panel asks him. He looks puzzled, it’s obviously a stupid question. “Because the teacher tells me to....” “Why do you obey him?” Wasn’t it obvious? “Because I’ll get a beating if I don’t obey.” What do you want to be when you grow up?” the panel asks. “A teacher.” “Why a teacher?” “Because I want a life of dignity,” Prakash replies shyly.

Aarti, in the seventh standard and studies in a Girls High School in Patan district. “I clean the classroom and the toilets three times a week.” “Why do you do this?” “Because the principal asks us to do it,” she replies. “How does he know you are a Balmiki?” “From my name. If we say we don’t want to clean toilets, they beat us. Three Balmiki girls, Sangeeta, Raksha and Daksha, were beaten because they didn’t want to clean the toilets.”

In the schools, the pattern is almost always the same. The teacher or principal asks “all the Bhangi children to stand up”. Then they are allotted the toilet cleaning duties.

Rahul is an unusual name for a Balmiki kid. He disposes of dead animals for Rs 10. He also cleans the toilets and urinals at school. Have you heard of Rahul Gandhi, someone inevitably asks. “No,” he replies. “Didn’t you see him on TV during the elections?” “I don’t think so.”

Jayesh, in the 10th, is sharply turned out. Maroon shirt, cream trousers, hair smartly cut. A mobile peeps out of his pocket. It’s hard to believe that the lad regularly mucks about in manholes to earn some extra money. But he dreams of doing a BBA, getting a job in an office. “If I pass my BBA and get a job, I will never do this work again,” he declares. 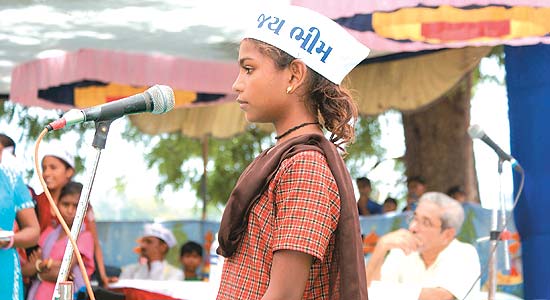 A Dalit girl deposing before the panel

At the hearing, findings from a study conducted in 12 districts of Gujarat by the Navsarjan Trust, a Gujarat-based ngo working for Dalit rights, was shared. The object of the survey was to highlight the children’s plight and bring it to the notice of the government, the public and the courts. Later, principal secretary, state education department, Hasmukh Adhia, provided a somewhat cryptic soundbite, “If such cases of discrimination are brought to our notice, we will put the children in main schools.”

The teachers ask “all the Bhangi kids to stand up”. They are then allotted toilet cleaning duties.

The strange fact is these children are just the tip of the iceberg. And in a state which has supposedly won governance awards and corporate seals of approval. It is now even the home of the Nano. All these kids work for a pittance, cleaning manure pits, dragging dead animals, helping their parents to sweep streets, mop floors, clear garbage, clean toilets. In schools they are forced to do this for free. In the evenings the children accompany their parents to collect leftovers from the homes their mothers work in. It’s known as “baasi” or stale food. Mulk Raj Anand described it graphically in his 1935 novel, Untouchable. Seven decades on, it’s almost as if time has stood still. Their situation remains the same. Vile, degrading, a disgrace to humanity.

The children are bullied in their villages as well as at school. If the sarpanch or an upper-caste person orders them to do a job, they cannot refuse. If the “malik” is kindly disposed, he may give the child ten rupees, twenty if he’s magnanimous. But the caste system brooks no dispute. “If they don’t do these jobs, who will?” is the genuinely astonished refrain in many villages. Feudal India has not changed in spite of Independence, an egalitarian Constitution and sixty years of laws against untouchability.

Throughout Gujarat, Balmiki children in government schools are arbitrarily pulled out of class for menial jobs. Surprisingly, in most instances, the authorities feel no wrong has been done. No one mentions a certain 1989 Scheduled Caste and Scheduled Tribes Prevention of Atrocities Act, which says offenders can be jailed for mistreating Dalit children. The only way to stop the victimisation is if stringent action is initiated against the perpetrators. Rather late in the day, but Dalit organisations have arrived at a point where petitions are filed braving the wrath of the many power brokers of society.

Professor Ghanshyam Shah, a panellist at the camp, feels “the courts should take up the children’s statements on a suo motu basis”. Justice Mehta too agrees that this is “definitely a case for the Gujarat courts”. So, will the heads of errant officials roll? Will the courts take action? Or will these abhorrent practices continue for another 50 years?