Mantriji, Do You Watch FTV?

India's fashion diva stalks the corridors of power for a recce. And finds our netas have but a faint clue of its positive, multiplier effect on economic life. 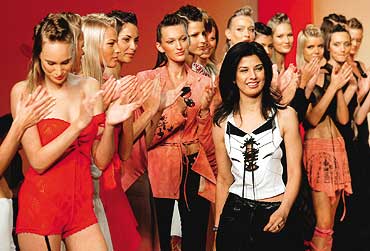 outlookindia.com
-0001-11-30T00:00:00+05:53
Long before New York became the melting pot of the world. Much before Parisians began emulating the emaciated mannequins of its iconic designers. And before Londoners starched their Saville Row collars to match their Brooks Brothers suits. South Asian yarns and Egyptian cottons were clothing the world in high couture.

Fashion, it's been my belief, has always reflected the economy and the world ranking of nations. Propping up industry and governments far more than advisors of the state. The togas of the Romans, the laurel wreaths of senators and Caesars. The headgear and designs of the Pharaohs, the robes of Greek maidens, all reflected fashion's ability to showcase the courts of power. Right up to modern times. When the ramps of glitz reflect the gold in the nation's coffers.

Don't believe me? Well, take another look at our own nation for starters. India has it all, a historical past, beautiful people, inherently talented craftsmen and incredibly creative minds. India does not lack ideas, skills, creativity or enterprise. But what keeps us from being a globally recognised power?

Now look at the fashion capital of the world. France, the fifth largest economy in the world, ranks fashion as its leading export. In fact, it far exceeds defence, agriculture and industrial exports. Post-World War II, who would have believed that France could ever be a world player? It created a reputation for itself as the prime purveyor of style, thus enabling its industrial exports to piggyback and achieve credibility too. Italy, also devastated by the War, replicated this story. Today, the world's fashion trends are made in Paris and Milan.

Till the early '80s, China was an orthodox communist society, run as a strict state-controlled economy. But Deng Xiaoping wanted to liberalise the economy rapidly. Well-known and even newer companies like Ralph Lauren, Nike etc started trekking the interiors of China to create manufacturing units for their global markets. Deng supported them and allowed the government policies to be more open and less bureaucratic. And boom: by the end of the '80s, apparel (both high-end and mass), shoes and household goods for most of the First World were being made in China.

It was again the fashion industry that helped create an image of a major developing country for quality, style and innovation. Job creation actually started from sports shirts, socks, and bathing suits to jogging shoes, bedspreads, towels and underwear. Now, of course, cars, electronics, planes are rolling off Chinese assembly lines.

India does have a nascent but thriving fashion industry. We are among the world's top 10 apparel and textile exporters. We churn out 1.3 billion readymade garments a year with exports valued at almost $13.25 billion. More than 93 million people are directly or indirectly employed by the industry, and this will only increase as trade restrictions in the West are eased. So why aren't we in the forefront of the world's fashion trade? Is it in the minds of those making our policies, a lack of understanding among the bigwigs in the government? There was only one way to find out: to meet those who matter.

Ravi Shankar Prasad, the minister of information and broadcasting, was my first port of call. While I waited to meet him, his secretary informed me that the minister was preparing for the Cannes film festival. That, I thought, was pretty fashionable! Walking into his office, I was greeted by a dynamic, confident, young, serious-looking person simply dressed in beige and black. To put him at ease, I asked him what his favourite colours were. "Mauve and cream," he said. Considering that these are the colours of the season, he scored additional points for being in the know of things, and we were quickly in the groove of our interview.What is the future of the Indian fashion industry? "Bright," he said enthusiastically. His reason was rational: "Every time I visit small towns, I notice a lot more beauty parlours. I also notice that the women there are conscious about their looks. They want to look different." Prasad told me that even though he is from the rss, he was one of the few to support Fashion Television (ftv) when everyone else wanted it banned. He thought ftv would be a great source of employment, but added quickly: "I don't watch it!" He was being cautious, not wanting to appear too fascinated by fashion. However, behind all this I discerned a modern, contemporary personality.

His parting shot impressed me: "I feel the 1990s was the decade of information technology, and the 21st century is the era of entertainment. And entertainment includes television, films, music, dance." I waited for him to add "and fashion"; but if he said it, it was inaudible.

The then minister of textiles, Kashiram Rana, put me at ease. He had a sense of humour and was open to any suggestions relevant to his portfolio. He approved of soaps on TV, pop Indian music, fashion shows and films. So what, I asked him, is fashion for you? "Garments is fashion," he said. I guess he meant was exports. He added: "We have bodies like the Apparel Export Promotion Council and Silk and Rayon Textile Promotion Council which are the core of the Indian fashion industry." I asked why the government had no policies related to fashion. He replied: "We have just invested Rs 18,000 crore ($3.75 billion) in the power loom sector, to upgrade the technology and replace obsolete machinery with new units." I told him that 1,000th of this would enable any designer to soar. He replied solicitously: "Why don't designers seek the help of the aepc since it employs many designers?"

To evoke his understanding of imaging, I tossed him a googly: "What is your opinion of Madonna?" He remarked innocently: "I cannot comment on her since I have never met her. Now that I have met you today and if I am asked if you are fashionable, I will definitely say No!" I was shocked. He continued: "Because you are dressed in a saree and look like a regular Indian lady." He turned to my colleague, who was dressed Western, and said even she wasn't fashionable: "Fashion is what you see on TV." He was right: for most people, fashion is about weird, over-the-top dressing shown on TV.

Arun Jaitley, minister of commerce, fashionably dressed in a navy blue Burberry T-shirt, welcomed me. Why did his policies never include fashion? "We produce some high quality products, like carpets, bed linen, upholstery, drapes that can easily be sold in stores like Harrods," he said. He felt that beginning December 31, 2004, when the quota system would be phased out, India's potential would be unleashed.

So does the industry have a future? He answered in the affirmative: "Indian manufacturers supply to brands like Ralph Lauren and Tommy Hilfiger. India is becoming a manufacturing hub, but somehow we are unable to develop and market our own brands." He was clear: "First we should establish brands in our own market, and only then take them abroad." But what about designer brands? I asked. "Individual entrepreneurship," he answered shortly. Meaning, as designers, we must fend for ourselves.... Well!

Sheila Dixit was in a crisp cotton saree when we met, and surprised me when she confessed she had been involved with fashion during her days with the Garment Export Association. Fashion, she believes, has to do with rural development and craftsmen like dyers, embroiderers, printers and weavers. I asked if she wears designer sarees. "No, designers are much too much designer for me."

When, if ever, would India be a fashion capital of the world? "Of course, we will be," she replied enthusiastically."In the next couple of years. We have great talent in India, our weavers, printers, dyers and embroiderers. Look how far our industry has come since the '60s." Amen to the power of positive thinking!

Our embassies worldwide work with the sole purpose

of creating the right image for our country. I asked our external affairs minister Yashwant Sinha if he thought fashion enhanced India's image. He said: "Certainly. But the industry needs to keep in mind that India is a developing country with many poor people. Hence its efforts should not be limited to merely catering to the whims of the rich and famous. It should also explore how fashion, design and style can be brought to the common man." Why do our policies have no relation with fashion? Irked, he responded: "I think there is an implicit accusation here. The government would do whatever possible to support the industry. It is the government's endeavour to eliminate poverty and to enhance the standard of living of our people."

The meetings were a revelation. Everyone focused on only certain aspects of the fashion industry, related to just their portfolios. They looked at fashion with respect to its impact on the masses, on issues like employment and exports. They touched the crux of the problem but offered no solutions. Consequently, it was all limited to exports or textiles, handicrafts and craftsmanship, restricting us to a mere cottage industry.

Leadership in fashion creates positive, tangible and intangible benefits for a country's economy. Fashion and style influence image and can quickly alter perceptions, hype tourism and pervasively transfer goodwill to other economic activities, and create a multiplier effect for the entire economy. But my esteemed leaders did not quite think so.

Information technology, software exports, biotechnology, service companies, even the long run of beautiful women crowned in beauty contests are transforming the popular perception of India. It's here that fashion can be the next frontier. We are well placed to create new winners, new leaders who can propel India to a new horizon. It's time the power centre returned to where it all began. At home!