This summer vacation we took our boys to Imphal. “Really?” asked friends. “Who goes to Imphal?” Actually, many. 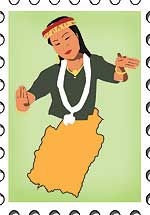 Pearl in the East

This summer vacation we took our boys to Imphal. “Really?” asked friends. “Who goes to Imphal?” Actually, many. Those who stay in the state and those who work there. There are three daily flights to New Delhi, and all are full. Yes, there is physical as well as emotional connectivity now, and we should start building on it quickly, before it gets back to the dark ages of the ’60s when Manipur was ruled by an administrator of the Indian army.

We went to the hill district of Churachandpur, a bustling little town till recently affected by the underground insurgent groups. But change is palpable. People want peace and prosperity. Manipuris working in other parts of the country realise what peace can bring. And they now seek a piece of that prosperity. Just a few miles outside is the Khuga Dam. It was raining when we got there. Silvery grey clouds accentuated the emerald green of the hills around. Three men sat on the wall of the canal, fishing. It was a scene out of a country idyll. Yet it isn’t the whole story.

The dam took 29 years to build. By the ori­ginal blueprint, it was to cost Rs 15 crore, but ended up costing Rs 400 crore. It was to generate 1.5 MW of electricity, but a turbine was never put to generate electricity. It was to take care of drinking water, provide water for irrigation, but its gates have never been opened. The utter wastage is mind-boggling, but is anyone even bothered? Elsewhere, I see administrative determination. The road from Imphal city to the airport is being widened into four lanes. Dumpers and jcbs are busy at work. Anything that stood in the way has been demolished. CM Ibobi Singh knows this is his last term. And this is the legacy he wants to leave.

It is believed that the Kingdom of Manipur germinated at Kangla. As its political and religious centre, Kangla grew into a formidable fortress city over the centuries. It is from this capital that the Ningthoujas ended up wielding enough political and military power to become the most dominant clan in Manipur. On the evening of March 24, 1891, British Gorkha troops attacked Juvraj Tikendrajit’s residence in the Kangla fort, killing many women and children who were watching a Ras Lila dance. The Manipuris struck back, killing five British officers, exactly at the spot where two Kangla Shas or dragons now stand tall. The incident sparked the Anglo-Manipuri War. The British defeated the Manipuris and hoisted the Union Jack in Kangla on April 27, 1892. They were to occupy it till 1947.

Later, the ancient fort, surrounded by a 20-feet wide moat, served as a barracks for soldiers of the 17th Assam Rifles. It is here, in front of the fort, that 12 Manipuri women disrobed with the poster: ‘Indian army rape us. Kill us’. They were protesting the alleged brutal assault on activist Manorama Devi in 2004. The dreaded Armed Forces Special Powers Act shielded the perpetrators. Kangla was ‘freed’ again when then PM Manmohan Singh handed over the fort to the state government that year. Now, greater Imphal is free of AFSPA too. What is exciting is the present. I am quite sanguine that in 2014, Kangla is one of the best maintained forts in the country—clean and carefully restored.

The three-month-long commemoration of the Battle of Imphal, one of the bloodiest ever fought in the subcontinent between the Allies and Japanese armies in 1944, ended recently. Netaji Subhash Chandra Bose’s Azad Hind Fauj helped the Japanese in their initial gains against the British and raised the tricolour in Kohima, but Japan eventually lost in a particularly sanguinary clash where every inch was fiercely fought over. The battle of Imphal-Kohima was recently voted ‘Britain’s greatest battle’, over D-Day and Normandy, Waterloo, Rorke’s Drift during the Zulu War in 1879 and Aliwal during the First Sikh War in 1846. But news of its remembrance hardly found any space in the mainstream media in the country. Manipur hopes that it would be different when they commemorate the 75th anniversary of the battle in 2019.

The Imphal valley is largely Vaishnavite and vegetarian. But fish is a part of the vegetarian diet. And it is delicious, even more so if the catch is from the Loktak Lake. A Manipuri thali is worth the experience. You are served so many dishes that you lose count. The meal is over when salt is put on the banana leaf you are eating on. Wash your hands with the salt and say thank you for a sumptuous meal. Meat consumption is less in the valley, but pork and chicken are relished in the Hill Districts.

Fat James is the restaurant to go to in Churachandpur, run by James Tusing, who weighs 103 kg and possesses a large heart.

No Country For Makers