No judging of Gandhi here, just a balanced perspective on a father-son relationship 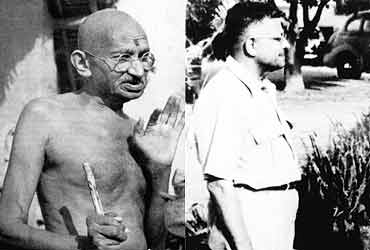 Gandhi's Prisioner: The life of Gandhi's Son Manilal
By Uma Dhupelia Mesthrie
Permanent Black Rs 795; Pages: 425
Uma Dhupelia Mesthrie is the grand-daughter of the subject of this biography, the Mahatma’s second son, Manilal Gandhi. She has taken the title from a letter Gandhi wrote to Manilal when he was just 26. In that letter Gandhi insisted that Manilal was not his prisoner but his friend. However, he offered advice so persuasively that his son had no alternative but to follow it. The question mark she has added asks whether the critics who have accused Gandhi of being a despot and ruining the lives of his sons are right, or those who would shield the Mahatma from all criticism. But she goes on to say that her biography doesn’t seek to answer that question; it "seeks primarily to understand rather than judge". And she is surely right, anyhow, when she says, "the truth is not to be found in choosing between two absolute opposites".

Uma Mesthrie, who is a professional historian, does portray Gandhi as a severe father who imposed his principles on Manilal. Although he knew Manilal was very anxious to study, when Gandhi had the opportunity to send one of his two older sons to Britain on a scholarship, he sent one of their cousins instead. He once told Manilal, "If you think of study for earning a livelihood, it is not proper; for God gives food to all. You can get enough to eat by doing manual labour." To a young man just setting out on life that must have seemed at best unrealistic idealism, and probably cruel insensitivity too. Yet Manilal never revolted against his father’s advice on his education, or the career he should pursue. Even when he was told he should not marry the Muslim girl he wanted to be his wife, Manilal obeyed.

But Manilal’s obedience does not, according to Mesthrie, mean her grandfather was a prisoner, or indeed a poodle. Manilal, she points out, did disagree with his father on occasions and was not afraid to tell him so. He started his long career in South Africa when his father sent him back to rescue the ailing Indian Opinion, the paper Gandhi had founded. Gandhi had always insisted that the paper should not carry advertisements, but Manilal decided they were essential for its survival. During one financial crisis, Gandhi said the paper should close if it lacked support.

But Manilal went on with the struggle. In 1939, at the height of the resistance against the move to segregate the Indian community in South Africa, Gandhi sent a cable to Manilal and another leader urging them to call the struggle off because of the negotiations which were taking place between the Indian and the South African governments. Manilal did not feel he could publicly defy Gandhi but he let his father know his decision had been a mistake.

Had Manilal considered his father a despotic jailer, he would not have felt any affection for him. But the most moving part of this biography is the description of the 15 months Manilal spent in India when negotiations for independence were reaching their climax after the war was over. Manilal wrote of those times, "Father lovingly gave me as much opportunity as was possible in the circumstances to be with him". When Manilal had to return to South Africa, his normally unsentimental father wrote, "I did feel myself moved to tears when bidding goodbye to you".

But it’s Manilal’s courageous stand against the apartheid regime in South Africa and his insistence on following the principle of non-violence which demonstrates beyond all doubt that he was his father’s son, not his prisoner. Had he been a prisoner he would have been an emotional cripple incapable of independent action and certainly never able to command the respect he did. But Uma Mesthrie describes a man who led non-violent protests, endured imprisonment, endangered his health by fasting, and stood up to the leaders of the African National Congress when they mocked his insistence on training for non-violence. In her conclusion she quotes Manilal as saying the principles which guided him were "simple living, high thinking, and passive resistance to injustice". They were his father’s principles and this biography is a reminder that Manilal not only inherited those principles but the courage to live by them too. He kept the flame his father lit in South Africa alight. It’s a tribute to him as well as his father that the African National Congress pursued a policy of non-violence until, in the words of Nelson Mandela, "the brute force of the oppressor could no longer be countered by passive resistance alone". Even then, the anc chose sabotage because it did not involve the loss of life. In later days, when apartheid was overcome, Gandhi’s principles also influenced the anc’s decision to make truth and reconciliation rather than revenge the watchwords.