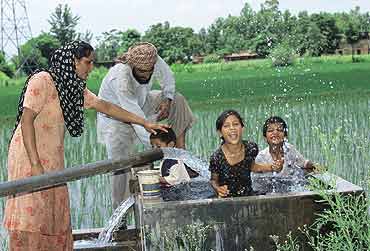 Their village Mangror in Ropar district falls in the Kandi belt in the Shivalik foothills. Groundwater levels have been falling alarmingly here in recent years, a main reason for this being the paddy crop which covers 60 per cent of the area during the kharif season. Add to this insufficient monsoons for the last two years. Traditional tubewells ran dry and farmers had to pump water through submersible pumps. These not only cost five times more to instal, the farmer needed generator sets to tide over the long power cuts.

This is exactly what happened to Jasvir last year. "Due to the prolonged dry spell, my 25-year-old tubewell ran dry." Due to the good price that paddy fetches, farmers like Jasvir—who owns eight acres—try to plant as much of it as possible during the kharif season. But last year Jasvir could plant paddy in just 1.5 acres and sugarcane in about three acres. And his purely rainfed tract of land in the foothills remained barren. "We found it difficult to pay the school fees for our two children. My husband has become a defaulter on his tractor loan he took two years ago," says Baljeet Kaur.