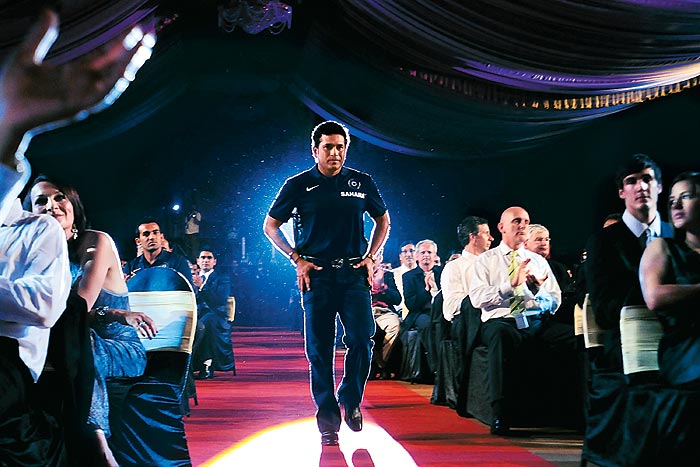 Sachin Tendulkar is a 21st-century sporting superstar. He looks like it, from the outside anyway. He is known, he is celebrated, he is rewarded, awarded. He is the man who thousands of unknown people rest their dreams on. It is what sporting superstars are meant to do: perform, perfect and entertain, and represent a larger aspiration.

The marketing and ad world may see him as The Brand, but he’s not seen to be consumed by it. The Brand is not A Brand yet.

Tendulkar’s lived this life from around age 20, from when he suddenly became the man to walk out for India in the short game. He may look like a 21st-century sports star but he has not acted like one. Today, he is seen on billboards, on television, in magazines and newspapers, saying this, offering that, standing for something else, a corporation, a clothing, a bank. This constant presence can often dim an athlete’s aura and annoy his public. But magically, not Tendulkar. In the world of advertising and marketing, they may think of him as The Brand, but he is yet to be seen consumed by it. The Brand is not yet A Brand. Unlike what Andre Agassi, Tendulkar’s contemporary at one stage, had become for a while. Or like David Beckham is now. Or Tiger Woods used to be. Or what M.S. Dhoni has tipped over into. As India and Indian cricket have changed during the course of his career, Tendulkar mysteriously has not. 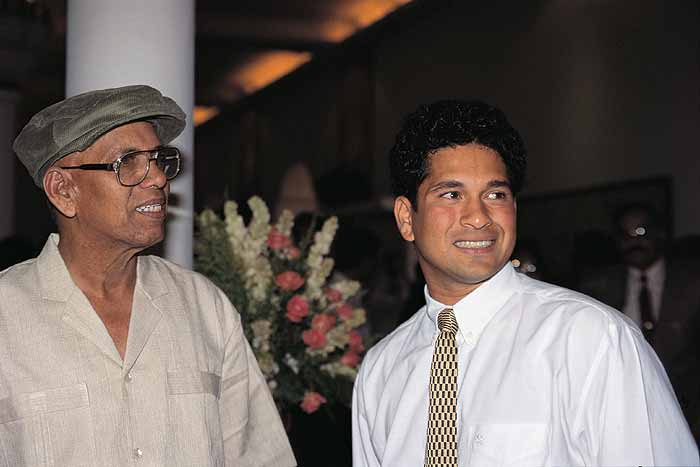 In his two-decade-long odyssey, Tendulkar’s main opponents, you would imagine, were bowlers, pitches, the opposition. He was, however, also involved in another contest, running on a parallel track for the same length of time. Tendulkar versus the Machine.

It was Sports Illustrated writer Gary Smith who first described the Machine in 1997, as he tried to argue out the (now tragic) claim of Tiger Woods’s father: that his son was not just a golfer but humanity’s Chosen One. Smith didn’t believe the idea, because he said, in the contest between the Machine, with its “chewing mechanism of fame”, the athlete could never win.

Circa 1997, Woods was what Tendulkar still is and these were Smith’s words: “The machine will win, because it too is destiny, five billion destinies leaning against one...it will wear the young man down, cloud his judgement, steal his sweetness.... The machine will win because it has no mind. It flattens even as it lifts, trivialises even as it exalts, spreads a man so wide and thin that he becomes margarine....”

In just over a decade, Smith’s fears for Woods came true. The Machine today is a recognisable, seductive, dangerous thing. It is fuelled by success, fame, money, celebrity, the image industry—all of which has seeped into the Tendulkar career, alongside the startling inevitability of his progress. Every series, every game, every season, every year, every achievement, Tendulkar goes up against his external adversaries and also the Machine. That he has stayed ahead of the Machine so far is as much of an achievement as 97 centuries and thousands of runs. That he has not turned into margarine is a miracle.

In an interview, Tendulkar spoke of a moment early in his career when he said what had happened to him, just after pulling on the India cap and T-shirt, “you start thinking that, oh, I’m somebody special.” It was an unnamed friend who then passed on a message to him. “Just tell Sachin that I’ve noticed he is probably starting to think differently; the sooner he realises it, the better it is.” Tendulkar said, “And I sat back and realised, yes it was true....” It is not the most profound piece of wisdom, it was probably a mate saying, “Hey, you, you’re close to becoming a punk, you know.” But it came at the right time. For the particularly gifted and successful athlete, the penny more often drops all too late. 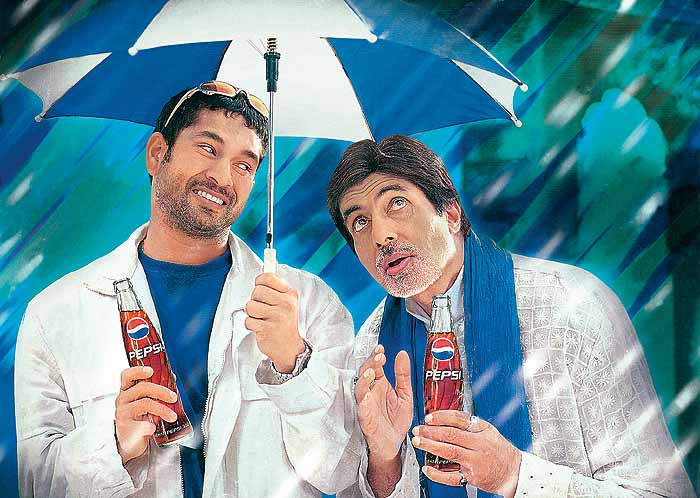 As big as Big B: endorsing Pepsi

Tendulkar’s survival in a brutal business—Indian cricket first skyrocketing to financial highs before a consistency of sporting success—has extended beyond his being the fairly conventional ‘role model’, defined and lauded by ‘good’ public deeds. For a large demographic looking for clarity in a churning world, Tendulkar represents an idea, which will always wrestle with contemporary circumstance: the athlete as a clean, fair, respectful and successful competitor. It is so old-fashioned a notion that it gets called ‘boring’.

Being so ‘boring’ is actually hard work. For a man who hates losing, it cannot be said Tendulkar has no ego. (All the great ones have large egos.) For a man who loves cars, it cannot be said he does not appreciate wealth. (Who does not?) What probably overrides both these powerful intoxicants, along with the advice from his friend, is a central belief that keeps Tendulkar a step ahead of the Machine, that convinces him to keep his own publicity at bay.

He is not merely a student of cricket but, in fact, a devotee. In this volume, Clayton Murzello reveals how Tendulkar never throws his bat, ever. There is a clue there. He understands what he’d be without that bat. If he leaves the dressing room like a snarling competitor (telling Virender Sehwag before they went out to bat together against Pakistan in the 2003 World Cup, “I’m going to get these guys”), he returns with humility, the dismissal is a reminder of his flaws, his frailties, his weaknesses.

Sachin never throws his bat, ever. He knows what he’d be sans that bat. He eludes what others fall prey to: entitlement.

Former India coach John Wright says after he is out, there are no wild swings of emotion. The aggressor and accumulator becomes a ‘reflective’ batsman in the dressing room who sits down and is able to ‘de-brief’ himself. It is why, Wright said, Tendulkar “knows where to go with his mind and his technique”. It is perhaps why he has managed to stay clear of what most popular sportsmen fall victim to: entitlement. It is what he says to youngsters just into the team, “I know it’s good you are here but learn to respect the cricketers who actually played with you before.” Remember where you came from, “that will help you stay on the ground more than anything else.” 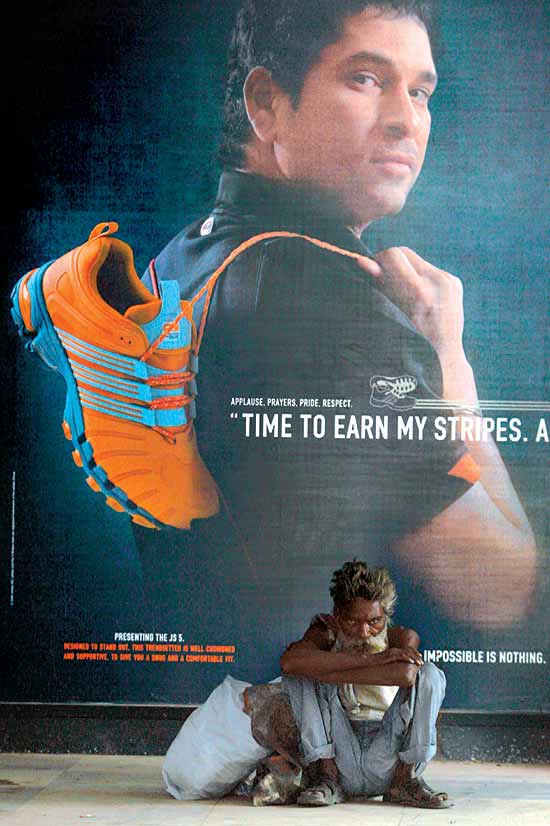 Larger than life: refuge for hopelessness

Those around him say he forgets nothing about his time in cricket, about the others who shared the field with him, what happened, what was said to him. Be it in his neighbourhood as a school boy, or in his first club game or during a match played before thousands when a nation held its breath. It is why he goes to meet his now-ailing coach before every tour, how he stays true to his gift. It is how he dodges the Machine.

Twenty years on, what is easiest to understand about Tendulkar is his cricket. How it all falls into place: the eye reads the length of the ball, the mind decides to pick a stroke, the feet follow that instant of shot-selection, the arms and torso choreograph toward the moment of impact, where the bat ends up and where the ball. It’s the man who has evaded the Machine who is the mystery. People say it is his background, his family, his deep moorings but the Machine has always seen it all before and still won.

Maybe it is because he comes from another era, when he played a different sport to the one he now explores. He comes not only from a time that is now just memory, his familiar surroundings as a growing boy have now turned into another place.

Sachin’s defied the machine perhaps because he comes from another era, when the sport was different to the one today.

When Tendulkar first broke through, he was a very shy teenager, a prodigy who didn’t like being treated as one, who hated attention and barely spoke to strangers. Who disliked being photographed outside his area of work. Who had police constables standing outside the exam hall where he gave his XII standard exam. He could have folded up, he could have fled, but he has looked the Machine in the eye and stood his ground. It means now, on the field, the crowd bears down on him, surrounds him, demands of him. There won’t be a public space in India he can walk free in; his holidays in Mussoorie, for the last few years now, begin and end with a short press conference.

It is the Machine, always at his side, purring, growling, always trying to win. He will have to do so for the rest of his life, but for the moment, Sachin Tendulkar is winning.

The writer is Senior Editor, espncricinfo