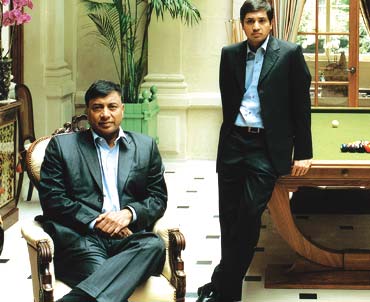 Lakshmi Mittal, now the fifth richest man on the planet, is leaving massive footprints on the 21st century's built environment as he continues on a remarkable journey that began in the unremarkable town of Sadulpur on the shifting sands of the Thar desert in Rajasthan, where he lived in a modest house, without electricity or piped water. Now, he uses a private jet, a chauffeur-driven £2,00,000 Daimler Maybach, and a couple of very large yachts as he travels to houses in London, Delhi and St Moritz.

Mittal had a facility for numbers, graduating from St Xavier's College, Calcutta, top of his class in commerce and joining his father's small steel company full-time, aged 19. He was inspired by his father's creed: 'Accept challenges. Don't get scared by new prospects.' It is a creed that has fuelled and fired the greatest story of industrial success since that other baron of steel, Andrew Carnegie. Mittal is now worth £19.25 billion, yet just three decades ago he was paying himself $250 a month and driving a second-hand Australian car in deepest Indonesia.

In 1975, aged 26, he gazed out at the rice paddies in Surabaya, East Java, that his father had instructed him to sell because his plans for building a steel mill there were beset with bureaucratic governmental obstacles to gaining the necessary permits and electricity supply. Instead, he decided to ignore his father's instructions.

"I went to the retail market to see the prices of bars (steel for making gears, tools and engineering products) and rods (used to reinforce concrete) and saw there was a good margin in the business," he says. It was also a chance to produce steel for the first time in Indonesia and strike a blow against the Japanese companies that used the country for finishing products and were monopolising the local market. He would undercut them by building a mini-mill—with machinery imported from India and local partner cash—with an electric arc furnace fed with enriched iron-ore pellets rather than the bulky coking plants and blast furnaces used traditionally to turn raw iron ore, coke and limestone into steel. It would give him a cost advantage of up to 50 per cent. Mittal returned to the ministry and the power company. He got his permit and his power supply. "Then I called my father and I told him, 'I shall build this plant here'."

Mittal was to stay in Indonesia for 14 years, with his young wife Usha—whom he married at the age of 21—and their children, Aditya and Vanisha, developing and making his plant more profitable. Mittal started making 30,000 tonnes of steel a year. It took him 13 years to get up to 3,30,000. He wished to expand, but knew it would take too long to start more plants from scratch. Instead, he would start buying up other people's. In 1989, he bought the Iron and Steel Company of Trinidad and Tobago, replacing 60 German managers costing $20 million a year with 60 Indians who did a better job for $2 million. In 1992, he bought another company in Mexico. He snapped up rusting, state-owned, bankrupt plants in far-flung places like Algeria and the outer reaches of post-Soviet eastern Europe that nobody else wanted to take a risk on. He turned them to profit in double-quick time, slashing costs and increasing production. Mittal kept buying up the plants, and he slipped under the radar to become the biggest producer in the United States. Western Europe began to fall to his march. Following his victory last year in an epic and brutal battle to take over his nearest rival, Arcelor, he is now indisputably the biggest maker of steel the world has ever seen, three times bigger than his nearest rival. He is a global industrialist employing 3,20,000 people in 60 countries.

He is also the first Indian to make his fortune entirely outside his own country. "I am proud to be Indian, I have an Indian passport, but I regard myself as a global citizen," he says, having moved to London in 1995, encouraged no doubt by the huge tax breaks afforded to international entrepreneurs who claim non-domicile status in the UK. And what better place to rub along with the prime ministers and presidents whom he now regards as friends than Kensington Palace Gardens, one of the most expensive and discreet streets in the world?

Mittal paid £57 million for his gleaming white, three-storey, neo-Palladian home, once owned by the Formula 1 supremo Bernie Ecclestone and the Islamic art collector David Khalili. Across the way is Kensington Palace. Mittal's palace boasts a ballroom, a picture gallery, 12 bedrooms, Turkish baths, palm-tree pillars swathed in gold leaf and a jewelled basement swimming pool where the superfit vegetarian swims lengths every morning before boarding his Gulfstream G550, sometimes flying to three countries in a day. Servants glide across marble floors dug from the same quarry as the Taj Mahal. Mittal's wife Usha has furnished the house with the kind of antiques and artworks most of us only see surrounded by silken ropes. Some claim it is the most expensive private residence in the world.

From paper clips to suspension bridge cables, shipbuilding to car bodies, hi-fi chassis, oil and gas pipes, Mittal's steel is everywhere, including the 10,000 tonnes of massive beams known as 'jumbos' going into the foundations of the Freedom Tower that is being built on the site of the World Trade Center's twin towers in New York. Seventy per cent of American car bumpers are made by ArcelorMittal, his colossus of a company. So is the beautiful Millau Bridge, the world's highest, which sweeps 984 feet above the River Tarn in the south of France. "Yes, Lord Norman Foster designed it," Mittal acknowledges. "But it is 27,000 tonnes of our steel that made it possible."

"Mr Mittal is...a man of figures," says his chief operating officer Malay Mukherjee. "When we bought the plant in Mexico, it was producing just 5,00,000 tonnes a year when it was designed to make two million. In the first month we produced 70,000 tonnes. Mr Mittal set us a new monthly target—2,00,000 tonnes. It wasn't just a number plucked out of his head. He said, 'Your down time is 30 per cent. It's too high.' He had worked out that if we trained more staff and invested in spare parts, the plant would not be idle. He sees the big picture; he also knows the minute details. Now, that plant produces four million tonnes a year: one of our most profitable." Working for Mittal has been a breathtaking ride, Mukherjee says. "Sometimes I felt as if we should pause and take stock, but Mr Mittal always said, 'No, we must grow. We must move on'."

"I am very conscious of my obsessive side," Mittal admits. "I once took up golf. I started playing it every day. Then, one day, I was driving to the golf club and it worried me that I was becoming addicted, losing my focus, which I don't like to do, so I turned the car around and came home. I have never picked up a club since." In business, however, he does not turn back. 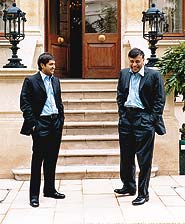 Aditya Mittal, 31, the chief financial officer of ArcelorMittal, looks even younger for his age than his father. When we meet, he has just returned from heli-skiing in Canada. His 57-year-old father prefers cross-country skiing because it is harder, but that is one of the few discernible differences between the two men. When Aditya left home to attend the prestigious Wharton School at the University of Pennsylvania, Mittal was so upset that he couldn't go to the airport to see him off. If Mittal is the visionary, Aditya, in charge of mergers and acquisitions, is the deal-maker. "I am very proud of Adit," Mittal says. "We understand each other very well as father and son and colleagues. Both can be very delicate relationships, but we have very good alignment. I have no problems about him following in my footsteps. In fact, I am following in his. He is the future." 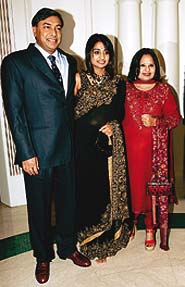 Mittal is equally proud of his daughter, Vanisha, 26, who is also on the board of his company. He famously spent a reported £34 million on her wedding in France in 2004 when she married Amit Bhatia, a Delhi-born investment banker. A thousand guests flew in for five days of events, including an engagement party at Versailles, wedding ceremony at Vaux le Vicomte (the finest chateau in France), an hour-long play that told the story of how Vanisha and Amit met and fell in love, dinner in the Jardin des Tuileries cooked by chefs flown in from Calcutta, and serenades from Mittal's favourite Bollywood stars and Kylie Minogue. The press were banned. 'Papa, buy me an Eiffel,' ran the headline in the Indian magazine Outlook.

"I do not comment on family matters," Mittal says. "All the figures are speculation."

Along with work, family is the twin pillar in Lakshmi Mittal's life. Apart from loving James Bond films, he has few interests. Whenever he gives a major speech or press conference, his children and their spouses or his father are usually there. The whole family spends weekends together. There are many photographs of relations all around the house. He dotes on granddaughter Shanaya, born to Aditya and his wife Megha last year. But the most important member is his wife Usha. There is much more to her than a wife who stays in the background furnishing houses. As he began buying up companies around the globe, Usha ran the plant in Indonesia. "She knows and understands this business very well," he nods proudly. "I have a very deep respect for her."

In an interview on Indian television last year, Usha confided that she "fell in love with him on our first telephone conversation", after a stilted, chaperoned first meeting at the Calcutta Club to cement their arranged marriage. "We talked for more than two hours." She was impressed by his hard-working attitude. He made her laugh. "He is always teasing me. We're still very romantic. Then he wrote me a letter, which he ended 'kissed by smiling always'. That touched my heart the most." "Weren't you touched by my also saying that I welcome you as my life partner?" Mittal asked. "Yes," she giggled. "But I was young then, you know."

Where will Mittal's journey end? Two of Mittal's competitors, Japan's Nippon Steel and POSCO of Korea, already have defence strategies in place, just in case he comes after them. "I have no plans to take them over," Mittal insists. But then he also told me he had no ambitions to buy a football club. A week later he was rumoured to be buying Birmingham City.

(Bouquet is co-author with Byron Ousey of Cold Steel, an account of the Mittal-Arcelor takeover, which will be published by Little, Brown in April 2008) ©Tim Bouquet/Telegraph Media Group 2007