Honey, pass the curry leaves...or get out the carving knives. He's rolled up his sleeves, and gone into culinary overdrive. 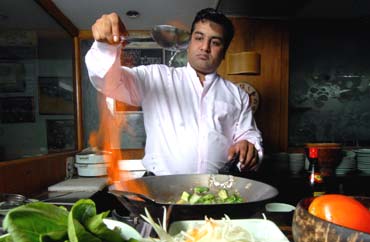 outlookindia.com
-0001-11-30T00:00:00+05:53
It used to be that the prototype Indian man was kitchen-shy, the sort of behind-the-times chap who wolfed down his food with nary a thought to all the machinations that went into it. But the lord of the Indian household is slowly becoming the lord of his kitchen. You could call him the modern man—and he likes to meet his meal in the marketplace first. For him, enjoying food is about ferreting out the choicest ingredients, and watching how the heat of a cooking flame eases out the rawness and teases out the flavour.

Yes, men can cook—and they are no longer embarrassed about it. You could thank foreign travel for it or an overseas education; the fact that working wives welcome the sudden respite from kitchen duty or perhaps just that celebrity chefs like Anthony Bourdain and homegrown Rahul Akerkar have made cooking as glam as walking down the red carpet at Cannes. Whatever the reason, more and more Indian men are discovering that food is an intimate experience—and that its preparation brings as much pleasure as its consumption.

Mumbai-based artist Riyas Komu started cooking for himself in a desperate bid to keep food costs down after he left his home state Kerala in search of career opportunities in Mumbai. But mostly, he says, cooking was about reviving old memories of growing up in Kerala. Komu inherited his love for coastal cuisine from his mother—her ancestral family made twine for fishing nets. And it is from his mother that he learnt not just to cook his fish—but also to know it.

Like Komu, banker Sarit Chopra is no hobby chef. He looks forward to cooking four evenings a week as 'time off' from the pressures of managing the distressed-assets fund of a leading global bank. Sometimes, "one in five times" Chopra estimates with the astuteness of a professional number-cruncher, the food can get 'distressed' too, but knowing the basics makes it easier to salvage a dish that's rapidly heading downhill. It's the new metrosexual mood, perhaps, but there's nothing steamier than a man with a skillet—and the women are lapping it up.

When Delhi-based retired diplomat Himachal Som, 62, got married nearly three decades ago, he knew only how to cook omelettes. He was still one up on his wife, Reba. "She didn't know any cooking," he marvels, "and I would help her out." Soon after, the newlyweds were stationed in Sikkim, and at a diplomatic dinner, Som met his culinary guru, K.S. Bajpai, who later went on to become India's ambassador to Pakistan, China and the US. "There he was, standing in a corner at a stove, whipping up crepe suzettes with such style," reminisces Som. "From him, I learnt what a great diplomatic tool cooking can be."

Now, the man with the omelette-only repertoire is a self-taught chef who likes to cook from scratch. He sources his fish at Delhi's Bengali-dominated Chittaranjan Park market; selects his cheeses from Jor Bagh; collects rare herbs and wines on his overseas trips; and goes to sleep poring over recipe books. (This is the only part that makes his wife angry.)

When Param Saikia, 45, CEO of Delhi-based ad agency Publicis Dialog, got married 16 years ago, he didn't even have Som's omelette advantage. Both Saikia and his wife were equally clueless about cooking—and their food cupboard was as bare as Mother Hubbard's.

Not any more. These days, Saikia's travel luggage doubles up as a portable larder. Three weeks ago, he paid 430 euros in excess-luggage penalties after a mad binge of food shopping in France—fresh cheeses, processed meats, jams, macaroons—and it would have all been worth it, Saikia laughs, if he hadn't returned home to find that his fridge had broken down.

For five hours a week, Saikia works on his prawn preparations, French-inspired or South Indian style; fish made the Bengali way and salads that combine unusual ingredients. "Now even my son knows who to go to when he's hungry," boasts Saikia.

Some, like Som and Saikia, found their places in the kitchen after they were challenged to play nutrition provider to a new-age wife who was looking for her place outside of it. Others, like Komu and Chopra, grew up in food-loving families where everyone cooked—and rediscovered their culinary inheritance soon after leaving home. For all of them, though, cooking started out as a hand-to-mouth necessity before metamorphosing into a passion.

As it was for textile designer Krsna Mehta, who went to New York's Fashion Institute of Technology as an undergraduate, and discovered that pan-frying was kinder on the palate—and just as quick—as ordering take-outs. Two years after returning to Mumbai, Mehta moved out of the family home to taste the solo life, finding himself a sea-facing apartment with a neat open-kitchen layout and a Man Friday called Ram Bahadur to do "all that messy Indian cooking". But four times a week and on the weekends, Mehta's house-cook gets demoted to errand boy, fetching all the ingredients and keeping them ready so that Mehta can work his magic on them. Yoghurt dips with mint leaves and onion; lemongrass-flavoured noodles; pepper chicken; pan-fried mushrooms with arugula leaves; Mehta prides himself on what he calls, in true designer-speak, his "little ensembles".

And though this sworn bachelor has no family to cook for, his house overflows with the warm company of friends pampered by good wine and better food. His Sushi Sundays are famous.

Miles away, in India's IT hub of Bangalore, a serial entrepreneur called Kiran Konduri gets his high from dishing up some unforgettable Andhra fare—when he's not starting up successful infotech companies, that is. For Konduri, too, cooking started while he was living abroad. The former co-founder and CEO of Zephyr Software, one of the Web's earliest service-providers for the Indian diaspora, Konduri has just launched www.asklaila.com, India's first local information browser. And he finds that the same rules of successful management apply in the kitchen—"meticulous preparation, attention to detail and the willingness to improvise when things go wrong".

Sameer Modi, Delhi-based CEO of Colour Bar Cosmetics, owes his culinary evolution to his mother. As a young boy, he whinged about the heavy Indian fare doled out by the Marwari cooks at home—but instead of sacking the cooks, his mother suggested that he make his own food if he didn't like what was prepared by others.

"I started off with cakes and cookies, then started growing coriander, carrots, radishes in the backyard," remembers Modi, and then experimenting to recreate tastes he'd encountered on his travels abroad. He won't think twice about standing on a street corner in Bangkok to suss out the perfect recipe for papaya salad; or collecting a couple of hundred cookbooks from around the world.

These days, it's fairly routine for Modi to call up to 40 people over for dinner—"I always warn them that I won't be there for dinner, I'll be in the kitchen." Thai and Lebanese cooking is his forte, yet he can slave over the meal for more than 12 hours, summoning up every paste, every stock from scratch. "I love feeding people, it soothes my soul," he says. Cooking is as much a social exercise for Chopra, who, unlike Modi, likes to keep his dinner parties intimate. "No more than 8-10 people," he says, firmly. "Anything larger and it gets industrial."

That's probably why hobby chefs like Chopra and Komu are happier eating—and entertaining—at home. Restaurant dining has none of the intimate bonding of a party at home, where an enthusiastic host has prepared the meal slowly and lovingly, often seeing it through on its long journey from marketplace to dinner plate. Komu calls it "spiritual cooking...if you produce something that others can taste and relish, there is no greater nourishing act," he says.

Komu's cooking begins nice and slow, kicking off at a noisy, congested seafood market near home, where he sizes up the latest catch and haggles over prices. Chopra scoffs at what he calls 'pressure-cooker cooking'—basically steaming the hell out of everything to shave a few hours off cooking time. He prefers to cook on a slow flame, grinding the masala fresh and adding the seasoning agents, one by one. Mehta likes cutting his bell-peppers and onions into attractive shapes and wonders whether that qualifies as an art form; Som calls cooking 'art thought out with the palate'; and Modi agonises over the presentation of his food.

And when cooking is liberated from the confines of familial duty, it becomes more experimental, more receptive to new influences. Mehta completed a quick course in Italian cooking at a five-star hotel in the city, and now dreams of a 'cooking evening' with a New York chef. Saikia trawls the Web to find recipes that he can adopt—and then adapt. Som's cooking is like a gastronomic map of all the countries he's lived in—from Cambodia and Pakistan to Denmark and Brazil.

After centuries of sweating over hot stoves, the fairer sex won't mind a little space opening up, lit up by a slow flame, and manned by someone with a convert's zeal about nourishing the soul as much as feeding the body.

By Payal Kapadia with inputs from Shruti Ravindran and Sugata Srinivasaraju