He has been the ideal reviewer: a halfway house between writer/reader 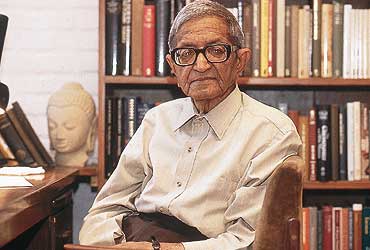 A Hundred Encounters
By Sham Lal
Rupa Rs395,Pages:535
In 1983-84, the British journalist Ian Jack, now editor of Granta, lived as a paying guest in Sham Lal’s house. In a tribute that he published on Sham Lal’s 83rd birthday, he drew a telling portrait of his host: "Sham Lal spent most of his days on his back with a book held over his head, reading. Or sometimes without a book, simply thinking, as though he had been tipped from the vertical to the horizontal, rigid, like a penguin in a children’s story.... Books covered most of the walls...pretty well everything that mattered in 20th century literature and politics was there."

Sham Lal is the rare, honourable exception in the annals of modern Indian journalism: the leader writer and editor who, though intimate with the hurly-burly of newsrooms, stood away and apart from them, in pursuit of the bigger picture, the larger idea. Although he earned a living from newspapers all his working life, the petty ambitions and rivalries of journalism left him untouched. Instead, over half a century of constant reading and writing, he created a unique space for literary criticism and political commentary in his columns.

The paradox of Sham Lal’s writing—he is now 88—is that although he has not produced an original book of his own, he has read virtually everything original written in the English language, at least in his lifetime. His calling has been of a critic in the true sense of the word: as halfway house between writer and reader, an intelligence deeply engaged in interpreting the men and ideas that fashioned the 20th century. The hundred pieces included here are all, without exception, book reviews written over 40 years. If that is not astonishing in a world where reviewers’ work can look shop-soiled before the week is past, Sham Lal’s chosen hundred encompass a range of thought and argument and learning that appear as fresh as paint.

Among the themes explored at length in the essays is the central political debate of the 20th century, the collapse of communist regimes and the rise of capitalism in its current avatar of globalised, multi-cultural, market-driven liberalism. The burden of Sham Lal’s insights are concentrated on two gripping questions: what went wrong with the Soviet Union and what’s going wrong with America? His sustaining virtue throughout—whether speaking of poets, philosophers, revolutionaries or historians—is as a doubter, a sentiment that immediately puts him in sympathy with poets rather than political leaders. He is revolted by Lenin’s "utter philistinism" for denouncing Dostoevsky as "the foulest of writers" and by Mao’s belief "in the educative power of manual labour". He is equally repelled by the phoney triumphalism of political liberalism and the market theology, making short work of books by end-of-the-century gurus such as Paul Kennedy and Francis Fukuyama, and reserving his admiration instead for The Age of Extremes by British historian Eric Hobsbawm, a sceptic like himself.

"Genuine democratic societies and successful market economies constitute a minority among the world community," writes Sham Lal, "...and the irony is that even those at the top of the new global pecking order have failed in their endeavour to get rid of the old cycle of booms and busts or prevent some erosion of their social security systems. Indeed, as large corporations in many rich countries slash jobs every day, the old fear of a long depression has come back to haunt affluent societies again."

Not surprisingly, the largest section in the book is made up of literary critiques, penetrating essays on writers, playwrights and poets as various as Hemingway, Lawrence, Brecht, Kafka, Mann, Camus, Fuentes, Borges, Seferis, his personal friend Octavio Paz, and many others. Of the many crimes committed by the Soviet empire in the name of the proletariat, Sham Lal finds the "spiritual devastation" caused by the extinguishing of Russia’s poets the hardest to forgive—Boris Pasternak denounced as "a pig", Anna Akhmatova as "a half-whore, half-nun" and Osip Mandelstam and Isaac Babel broken and killed. "There are no other words to describe a state of affairs in which the very persons whose job it was to preserve the integrity of thought and speech felt choked." He quotes Trotsky when the poet Sergei Essenin took his life two years after the October Revolution. "Essenin was a lyrical poet," said Trotsky, "but the times were not lyrical."

It is hard to imagine that if they hadn’t been compiled in a book these essays would have lain forgotten, ending up in an obscure cabinet stuffed with files of yellowing newsprint. Alone among his peers in Indian journalism, Sham Lal was the columnist who sought to connect thought and action. He pointed out the links between external events and inner lives and communicated them week after week to millions of readers. The arrival of A Hundred Encounters is both a triumph and a requiem: a most gallant publishing effort but also a lament for the quality and depth of writing that Indian newspapers contained.