Malware In The System 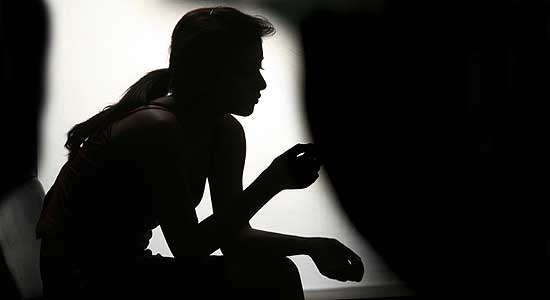 Skew In The System

Early puberty is on the rise, with girls as young as eight starting their periods, making them vulnerable to diseases of the reproductive system at an earlier age

Ketki Pandharipande’s body sent out the first SOS signals during her board exams. “Till the 11th standard I was thin. I used to play sports and was very active,” she remembers. The following year brought with it the inevitable stress of spending long hours at the study table. By the time her 12th board results were out, the teenager had gained 15 kg and had facial hair growth.

Now 22 years old, Ketki recalls how her rapid weight gain left her family and herself flabbergasted. A visit to the family doctor and, on his suggestion, an endocrine specialist, led to Ketki being diagnosed with a polycystic ovary syndrome (PCOs), a hormonal disorder usually associated with married women visiting infertility clinics. In medical terms, this meant that a girl as young as Ketki had ovaries filled with fluid-filled cysts as she was not ovulating properly, and high levels of male hormones, androgens, in her body. It took her two years, medicines, a strict, supervised diet and an exercise regime to get her weight under control.

We have descended into this hormonal hell within one generation. Keeping us company is the next generation.

Ketki is not alone. More and more women in their reproductive years—from the time they hit puberty until when they become menopausal—are falling prey to a clutch of endocrinal imbalances and disorders. In a healthy woman’s body, the release of hormones, the chemical messengers of the body, is a harmonious dance. But it is all too easy to disrupt. Dr Nadeem Rais, a well-known Mumbai endocrinologist, says that he has seen a familiar pattern emerge. “Stress first affects the mind and is psychic in nature. Then it affects the mind and body and is psychosomatic. Then it is somatic—affecting the body and then finally, organic, affecting individual organs.” For women, working long hours and yet striving to fulfil a range of expectations and roles, stress is an invisible 24x7 companion. “The hypothalamus, situated in the lower central part of the brain, governs all hormonal secretions. Stress directly affects its functioning,” says Dr Rais.

“Out of every 10 women walking into our centres, seven have some hormonal imbalance or the other,” says Dr Shilpa Morekar, consultant pathologist at NM Medical, which provides diagnostic services to endocrinologists, gynaecologists and infertility specialists in the country via five branches in Mumbai and one in Bangalore. Ruling the roost of endocrinal disorders are diabetes, PCOs, hypothyroidism and low levels of Vitamin D3 (now classified as a hormone).

“Every second patient I treat in Delhi and every third patient in Mumbai has PCOs,” says Dr Nandita Palshetkar, an infertility expert, who flits between both cities. She says that in the last 15 years, she has seen a 20-25 per cent increase in cases of PCOs in her practice. Dr Pervin Meherji, fertility expert and former deputy director of the National Institute for Research in Reproductive Health (NIRRH), estimates that about 25-30 per cent of Indian women have PCOs. Hypothyroidism, the most widespread thyroid disorder, is eight times more common in women than men, says endocrinologist Dr Shashank Joshi. He also points to an Indian study which showed a higher prevalence of vitamin D deficiency among pregnant women and adolescent girls from a rural Indian community than boys. 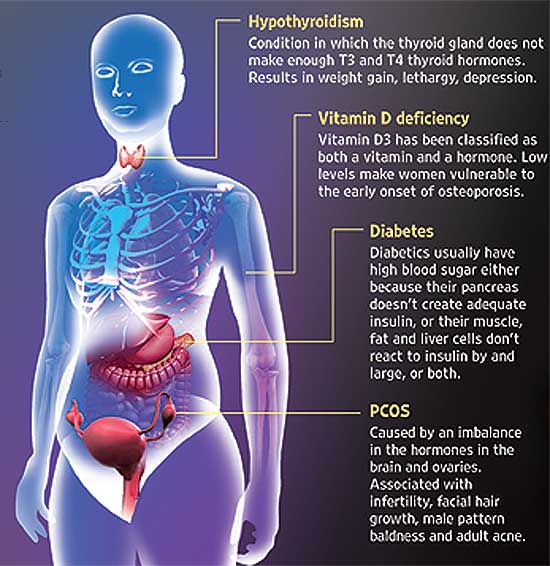 The gender health skew against women is apparent when you peek into the waiting room at south Mumbai’s Chowpatty Medical Centre. It is filled with only women. Dr Rais has been seeing patients here for the last 30 years, and looking back, he says: “There has been a paradigm shift. In the early years of my practice, 70 per cent of my patients were men. Now, 74 per cent are women,” he says. It’s clear from what he and other specialists say that we have descended into this hormonal hell within one generation. What’s more, keeping us company in the doctor’s waiting rooms is the next generation—girls as young as 12.

The reversal of gender fortunes alluded to by Rais has also come about because women are more “hormonally vibrant” (their hormones fluctuate on a daily basis), and so far more vulnerable to changes in lifestyle and the immediate environment. Says Dr Anoop Misra, director and head, department of diabetes and metabolic diseases, Fortis Group of Hospitals, Delhi, “There are twice as many insulin-resistant women compared to men. Gestational diabetes that used to affect only 6-11 per cent of women 20 years back now affects approximately 15-20 per cent.” He lays the blame squarely on spiralling obesity rates, especially in women.

Obesity has also been linked to a condition called oestrogen dominance in women, since adipose (fat) tissue produces oestrogen. The condition has been linked to disorders like PCOs and early puberty. “Earlier, precocious puberty was when a girl started menstruating before she was 12. Now, the term is used to describe girls who start before age eight,” explains Dr Rais. That’s why it is not unusual to see girls as young as 12 and 13 also being diagnosed with PCOs. This worries Dr Usha Sriram, a Chennai-based endocrinologist. “Studies show that PCOs makes these children far more vulnerable to diabetes, gestational diabetes and cardiovascular diseases later.”

“There are twice as many insulin-resistant women compared to men. Gestational diabetes is also rising.”
Dr Anoop Misra, Fortis Group

But the going gets tougher for those with more than one hormonal imbalance. Sharmila Sarkar was in college when a relative told her to get her thyroid checked for her inexplicable weight gain. “I was diagnosed with hypothyroidism and put on thyroid medication. This made me less lethargic but there was no reduction in weight,” she recalls. A few years later, she went to another specialist. “This time I was diagnosed with PCOs and I showed insulin resistance too,” she says. Besides taking medication, she has had to exercise harder, mixing high-octane jogs in the morning with rigorous yoga sessions in the evening, and also control her diet.

Rujuta Diwekar, the celebrity nutrition and fitness expert, says 99 per cent of her clients suffer from either PCOs or hypothyroidism or both. As research delves deeper into the reasons behind the rising numbers, other factors are coming to light, like genetic predisposition. A study carried out by Dr Anurupa Maitra at NIRRH suggested that gene mutations found in Indian women with PCOs leads to hyperandrogenism, one of the key symptoms of the disorder. Similarly, Dr Srabani Mukherjee, currently working at the institute, is trying to identify gene mutations behind insulin resistance, seen frequently in PCOs patients. And there is more.

According to Dr Shashank Joshi, consultant endocrinologist with leading hospitals in Mumbai, hormonal disorders also reflect an urban environment that is gradually turning toxic. As an example, he picks Bisphenol A, a known hormone disrupter that mimics oestrogen and causes PCOs symptoms. “It leeches into our food and water via plastic containers. Similarly, a family of chemicals that includes DDT affect thyroid function too,” he says, quoting American studies that show this correlation. Dr Rais also recalls an Indian case where a select population suddenly showed an increased incidence in hypothyroidism. It was traced to thyroid-like hormones in the minced meat they were eating. “Besides, certain foods like cabbage and soya protein have also been linked to thyroid disorders,” he remarks. Unhealthy diets also lack micronutrients, crucial for proper endocrine function.

Vitamin D3 deficiency, linked to bone health, could also be leading to a spike in hypothyroidism cases and insulin resistance. But even by itself, the deficiency is costly enough for Indian women, who have to deal with the Vitamin D paradox. It is produced naturally by the body when exposed to sunlight, but since Indians are predisposed to have more melanin (which acts like a sunscreen), we produce less Vitamin D3 despite living in a sunny country. Environmental pollution also blocks UV rays, adversely affecting Vitamin D production in the body. Women have it worse because they are still expected to be modestly dressed when they leave the house, shielding them even further from sun exposure. “In addition, we are a primarily vegetarian society and Vitamin D3 is primarily found in non-vegetarian food like meat and eggs. That is why there is an urgent need to fortify certain items like milk with Vitamin D,” argues Dr Joshi.

In the face of such factors, both genetic and environmental, the only way a woman can protect herself from hormonal disorders is by prioritising her health. “The modern-day woman is so busy taking care of the other people in her life, she forgets to take care of herself,” remarks Rujuta, whose latest book Women and the Weight Loss Tamasha (see extracts on page 60) is targeted at women suffering from such lifestyle disorders. So instead of battling your hormones, make time to listen to them. The payoffs are great in the long run.