Royal Spread, Purple Haze, The Moor's Sigh, Have It And Drink It Took, Bonsai Emperor. 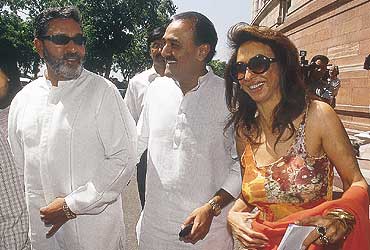 outlookindia.com
-0001-11-30T00:00:00+0553
It could well be the easiest political query to answer these days: who is the most feted new face in the Rajya Sabha? Vijay Mallya, obviously. No other MP has had as many parties thrown in his honour as the Bangalore-based liquor baron. The highlight of the session, of course, was the one hosted by Rajya Sabha MP Praful Patel. Besides the usual Page 3 faces, the guest list included the chamber of industrialists: the low-profile Uday Kotak, the high-profile Anil Ambani, BPL’s Rajeev Chandrashekhar wearing his trademark blue shirt-black trousers, and Videocon’s V.N. Dhoot. Also present were the First Family, i.e. the PM’s foster family; the Second Family, i.e. L.K. Advani’s daughter Pratibha, and the Third Family, i.e. Murli Manohar Joshi’s daughter Nivedita.

Such is Mallya’s popularity that when Congressman R.K. Anand hosted a dinner for the newly-elected Congress MPs, he said the party was also for Mallya! Good friends such as Parmeshwar Godrej specially flew into town. More’s coming. Invitations are out for former minister Saleem Sherwani’s bash for Mallya. Perhaps the only thing that rivals Mallya’s popularity in Delhi’s political circuit is his Gulf Stream jet, nicknamed Parliament Express judging by the number of MPs who hitch a ride on it.

Mid session when Suresh Kalmadi hosted his birthday bash in Pune, MPs Patel, Subbirami Reddy and Rajeev Shukla flew in with Mallya. In Bangalore, Mallya’s other 10-seater plane is called the Assembly Express as it often has the state chief minister and local MLAs as passengers.