Making Sense of Then Now 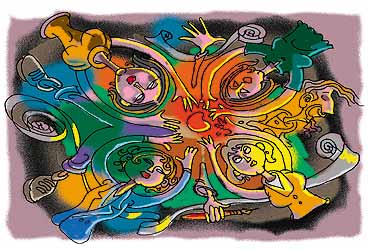 A personal history of desire and disappointment—that’s what the author calls this book, or what is really a book-sized letter. The kind of subject that has something for all of us, something even from all of us. But it wouldn’t have worked if we were only listening in to a confessional about the four women he loved and lost. Or because the extraordinarily obvious twist at the end would stop us comparing echoes, most of us anyway. It wrenches you out of any expectations of diary-reading with its play of past and present. That maybe living through an experience is only a part of living; what the mind does with it later is another story. The relationships that were and then weren’t happened in the mid-’60s. The writing came 35 years later. It’s a story of then, of making sense of it then, and of making sense of it now as it never did then.

All For Love is the latest in the autobiographical series Mehta calls Continents of Exile. None of the nine is as painful as this letter. It’s addressed to the women. “I was prompted to write this book about each of you individually, and about the four of you together, because of a long and profound inward journey that I started in 1970 and that has altered my life.... I am taking the strangers who will read it into my confidence; they will sit in judgement on us—on what was done, what was said and what was not said.” One impulse for “laying myself bare in this uncharacteristic way is the wish to get at the truth of exactly what happened”. Another, he says, is “to understand the effect of love on one’s sense of self”.

Ved Mehta was in his early 30s in the mid-’60s, and had found fairly early success living in New York as a writer for The New Yorker. Blind from age four, he went to school and college in England and America where “girls were prepared to be friends with me but generally spurned any romantic overtures...it was only after I started writing and publishing that any ‘nice’ girl seemed to take a romantic interest in me, as if my writing made me less alien—more real and comprehensible.” His position as writer opened doors to parties, and to women. And to women in a pattern that they did not know, and at the time he did not. But one woman repeated the other in a way that made it possible for him now to write to “all of you”.

Through those chapters you live the trauma of those relationships with him. Judith the dancer and then the Englishwoman Vanessa in New York (after those childhood wishes that “a memsahib would take me in her arms and whisper sweet English endearments to me”), above all, Lola Khanna from Delhi and fourth but not least Kilty back in New York. It’s quite a book for letters, and that exchange of letters with Lola Khanna over years of his life, and three chapters in his book, are a life lived and ended with letters that the writer found difficult to write. “Since I wrote for a living, writing letters always seemed to me a little like a busman’s holiday. Also, I had long become accustomed to dictating everything, but dictating love letters to an amanuensis, however sympathetic, was like undressing myself at the office. And whenever I sat down to type a letter to Lola, my laboured efforts seemed no match for her spontaneity.”

You almost don’t notice that it’s the author’s style that has taken you through that pain and made you live it before you knew it. This is not an author who makes an exhibition of his sentences. The words speak, and you don’t notice the brickwork along the way. It takes you to people in life in a way never possible through the clever wordplay of the likes of Rushdie and Roy. You don’t look at his sentences, you look through them into an experience, unmindful of the language that took you into it. Mehta’s style stands out for what it is not: so transparent you almost don’t see print on paper.

It’s the language of remorseless honesty at the end of one relationship after another. The had-I-this and had-I-that, the unacknowledged sense of how dreadfully wrong things are just when they seem perfectly right, all that telephoning after all those decisions not to, the secrets, the lies, the rubbishing, the manipulation, the other. And yet the book goes into relationship after relationship with feelings of warmth and respect for a woman who wanted to leave him to sleep with another man because she wanted to get over him, of a woman who set up the wedding with him and a date with another. And he writes of her with warmth and respect beyond the usual writer’s empathy. It took a shrink to call her a bitch.

There are moments through witnessing these relationships when the repetition of patterns among the women gets mildly wearying to read, as it was more than mildly wearying to live through. But the stories come with his innocence then, 35 years ago, call by call, letter by letter, illusion by illusion. The last 70 pages of sessions with a New York shrink can at times be heavy going. But it is this last chapter that untwists the story, the one that brings insight. It was there all the time. How did we not see it?

Blinded To The Divisions