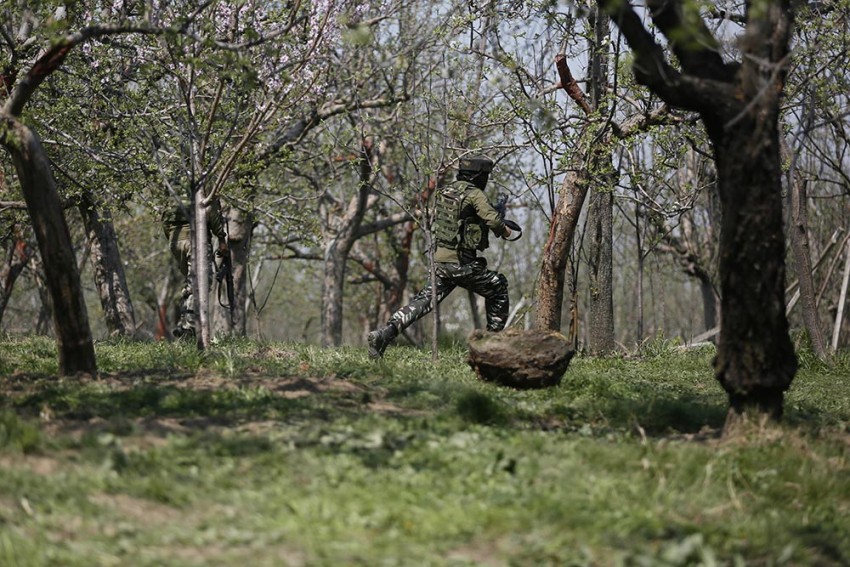 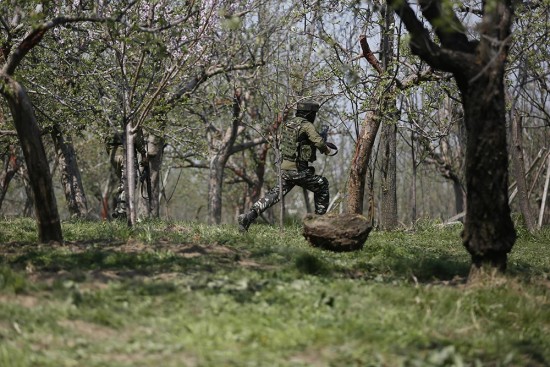 The Sunday (April 1) operations in J&K’s Shopian district, in which 13 ­local Hizbul Mujahideen militants were killed, inc­luding top guns Zubair Ahmad Turay at Dragad hamlet and Ishfaq Thokar at Kachdoora village, were the outcome of sustained eff­orts by the police to trace them. This was the highest number of militants to have been killed within 12 hours in the past two decades. Acc­ording to police sources, the success, which triggered a mass outpouring of grief over the killings of local youth, inc­luding four civilians, has also brought a fair bit of anxiety in its wake. Security agencies fear a revival of the massive protests that had raged for months across the Valley, following the killing of Hizbul commander Burhan Wani in south Kashmir’s Kokernag on July 8, 2016. Yet the agencies are hopeful that the Sunday operation will bring down militant recruitment in south Kashmir in the long run, and ser­iously affect Hizbul Mujahideen’s activities in particular in the short term.

Intelligence gathering over the months preceding the operation had revealed that locally recruited militants had been turning increasingly belligerent and become audacious enough to move around in groups, confident of their ability to break out of any cordon. They also preferred to stay close to their native villages. Most of the militants killed in the past one year in Shopian had been found in or around their native places, or in the villages of their relatives. 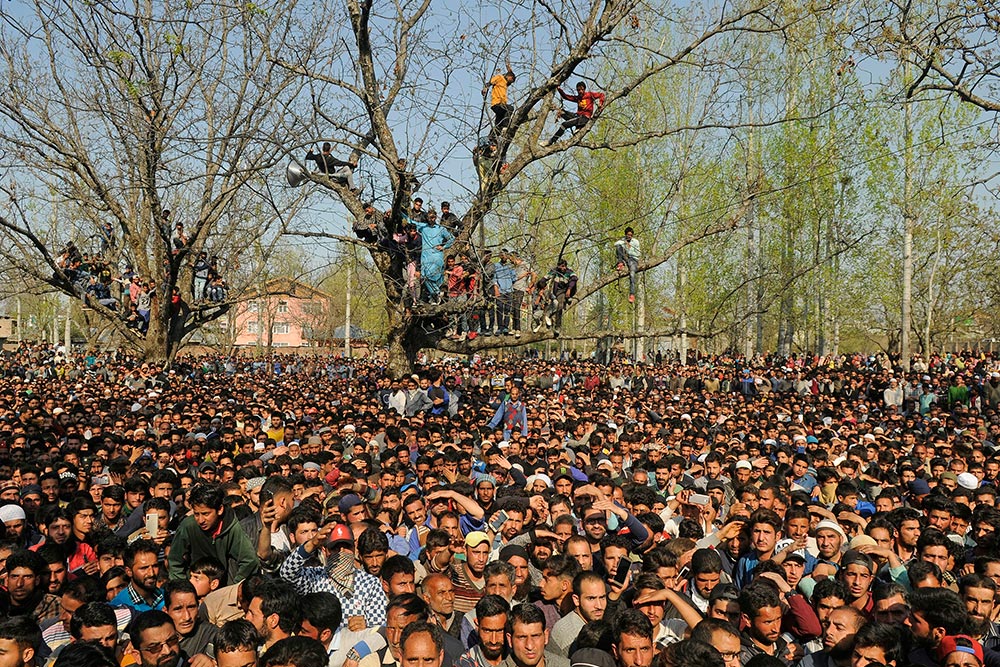 On March 17, local militants mounted an ambush on the convoy of the district superintendent of police (SP) at Hajipora in Shopian. The SP, A.S. Dinkar, managed to escape unhurt as he was travelling in a bulletproof vehicle. Nine days later, near Kachdoora, militants attacked the cavalcade of the 34 Rashtriya Rifles’ commanding officer. Again, there was no loss of life. Last August, militants had killed two army personnel, including a major, in Zainpora area of the same district.

After Burhan’s killing, Shopian and neighbouring districts had seen a spurt in militant recruitment. Burhan had given unprecedented importance to increasing militancy’s visibility, posting pictures of himself and other militants holding weapons. This is where they differed significantly from the earlier generation of militants, who preferred to be faceless. The new generation accepted the higher risk of being traced and killed in their effort to become popular among civilians, with faces that the local population could relate to and identify with.

A trickle of local youth had started joining armed militancy while Burhan was alive. After his killing, recruitment peaked until November 2017. Through most of last year, militants had a nearly free run in the relatively prosperous Shopian district, known for its apple orc­hards, forcing security agencies to start studying the terrain more systematically, dividing it into five zones: Kreeri, main Shopian, Wachi, Kapran and Hirpora. Sources say they started deploying the security forces and the Army in strength and increased both human and technical intelligence. As the militant domination was high in Shopian and their writ would run large in the area, the police say the force augmentation helped them in understanding militant movement in the militant landscape of Shopian.

Recounting the details of the operation, police sources say it began immediately after receiving information on the presence of militants. The security forces laid a cordon around Dragad and Kachdoora in the wee hours, and zeroed in on the house where the militants were hiding. According to villagers in Dragad, firing started at around 2.45 am. “We initially thought soldiers of the 44 Rashtriya Rifles were firing in the air at the Chillipora army camp nearby,” says an elderly man, whose son was admitted in a Srinagar hospital with pellets in his eyes. Over 100 youths were wounded in the protests that broke out early Monday morning.

At Dragad on the fateful night, there were 11 militants inside the house of Rafiq Ahmad Mengnu, whose wife is Zubair’s relative. One of Zubair’s cousins is an Indian Police Service officer posted outside the state. Police sources say four militants managed to break out of the cordon. All seven left behind were killed in the gunfight. A civilian, Mushtaq Ahmad Thakur, 36, was also killed and his family alleges the army had taken him along as a human shield. They say the army asked him to lead them towards the house where the militants were hiding. As the militants saw the army approaching, they came out of the house and the gunfight started. Mushtaq was killed in the crossfire. The police deny that he was used as a human shield.

The slain militants were involved in several attacks, including the killing of Lt Umer Fayaz, who was killed last May in Shopian. Most of the militants had joined Hizbul last year, including Zubair, who had uploaded a video alleging that police harassment and repeated incarceration under the preventive detention Public Security Act for alleged stone-pelting had forced him to pick up arms.

The other encounter took place at Kachdoora, around 20 km from Dragad, close to Shopian’s inter-district border with Kulgam. Three militants were killed first and the house where they had found shelter was brought down with a blast. Then four soldiers were hit in retaliatory fire from the surviving militants. Two soldiers died on the spot and one more succumbed later in the afternoon. Bodies of two more militants were recovered from the encounter site. Three civilians were also killed while allegedly helping the militants to escape. A senior police official says people in large numbers attacked the security forces in the village.

One of thoe killed at Kachdoora was Ashfaq Ahmad Thakur, who had joined militancy in 2015. Most of the wounded civilians got pellets in their eyes. A farmer from Kulgam, Abdul Majid Wani, claims his son Muneeb, 15, battling for life in an ICU in a Srinagar hospital, was hit when the army allegedly fired at boys playing cricket hours after the Kachdoora enc­ounter. “My son was shot in the abdomen around noon,” says Abdul. “He was operated upon twice. I don’t know whether he will survive.” Scenes at Srinagar’s SMHS hospital were a throwback to 2016.

There was another operation on Sunday night at Dialgam in Anantnag district, where one of the holed-up militants surrendered while the other, Rouf Khanday, 19, refused to come out. Rouf had gone missing in early February and a photo of him holding a gun appeared on social media platforms in March—a declaration that he had joined Hizbul.

“We didn’t want the young man to die, but he was adamant,” says SSP Altaf Khan, who tried to persuade a holed-up ­militant to surrender.

SSP Altaf Khan says he spoke with Rouf for 30 minutes before he was killed. Rouf justified jehad, while Khan quoted verses from the Quran to convince him that he was violating Islamic tenets. “He was adamant,” says Khan. “But we didn’t want the young man to die.” Then Rouf’s parents were allowed to meet him, but they came out in despair. Rouf lay dead soon after, and his parents took his body home for burial.

Post operations, the Valley was shut down for three days on the separatists’ call, while the government closed schools and colleges to prevent protests. J&K Pol­ice chief S.P. Vaid says the entire security grid exhibited textbook coordination, while 15 Corps commander Lt. Gen Anil Bhatt says he was particularly happy with the killing of two militants who were all­egedly behind Lt. Umer Fayaz’s murder. “He has been avenged,” says Bhatt.

CM Mehbooba Mufti said, “Every day it breaks my heart to see a wailing mother beckoning her son to return. Can we leave aside our accusations and counter-accusations, and put our heads together to save these young ones?” Former J&K CM Omar Abdullah took a dig at CM Mehbooba Mufti, saying she has accepted her irrelevance to Kashmir politics as she wasn’t back from her Delhi visit even 24 hours after the Sunday ope­rations. In Pakistan, at a special federal cabinet meeting, PM Shahid Khaqan Abbasi expressed shock at the civilian killings and described the use of pellet guns on protestors as “despicable”.