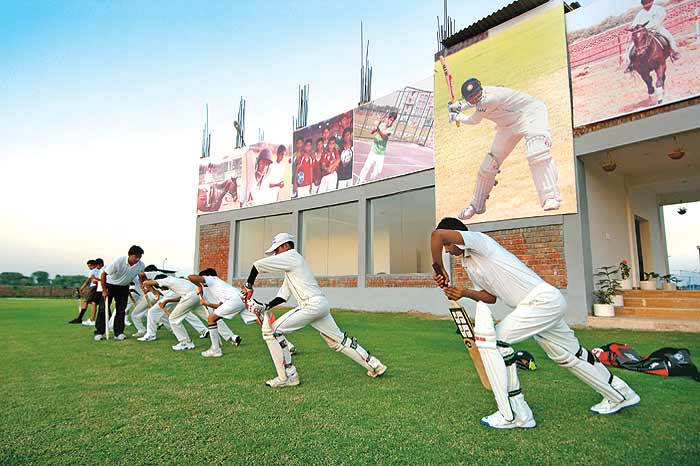 Cricketer Virender Sehwag’s family would often warn him in his younger days that he would struggle in life because he wasn’t good in studies. Not that the boy was dull, but was merely disinclined towards such sedentary undertakings. “Guess who’s struggling now!” his younger brother, Vinod, chuckles self-deprecatingly. Sehwag, who continued to neglect studies, has returned to it now in the role of an educationist. That’s right, Sehwag has turned educationist, and many competent professionals have joined the Sehwag International School (SISJ), at village Shilani Kesho in Jhajjar district, Haryana.

The SISJ is an oasis in the hot and dusty plains of Jhajjar. One look around and you know sports is meant to be a strong point—there are three kinds of tennis courts, a heated swimming pool, covered arena for the indoors sports, and even horse-riding facilities, besides, of course, a cricket ground and nets.“I’ve used all my investments to build this school,” Sehwag told Outlook. It’s clear money has been spent without stint to build a spiffy campus, which includes hostels, and on recruiting of the faculty. The classrooms are bright and airy and the curriculum ‘modern’. It’s 23 acres of paradise children could be residents of if their parents can pay Rs 2 lakh every year.] 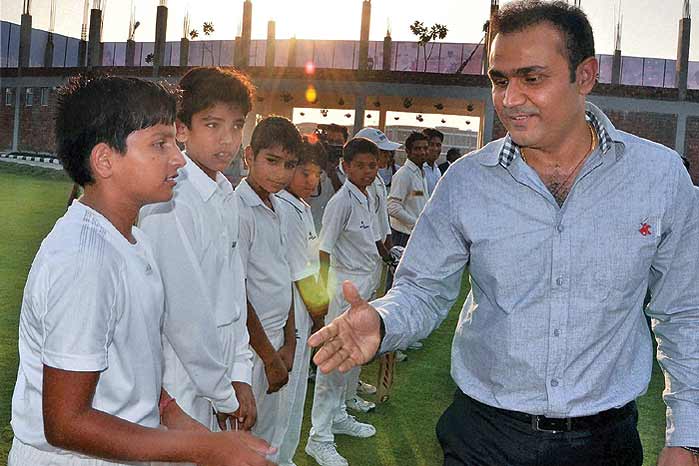 Not far away, in the middle of Shilani Kesho village, there stands a school called Happy. It’s crowded into a corner plot where two dusty, dirty lanes meet. The drains are stagnant and fearfully stinky, the lanes are strewn with animal refuse and mud and muck. It’s not a model village. In the two dark rooms of Happy School, children sit on the floor and learn by rote, shrilly repeating their lines, prompted by one child. It’s a different world from the one inhabited by children in SISJ, where they aren’t burdened with excessive homework and are encouraged to “express themselves”.

The two worlds meet at Shilani Kesho, leading to bemusement on one side, and suspicion, alienation and jealousy on the other. The village has leased 23 acres to Sehwag’s Krishna Drishti Educational Society (KDES) for Rs 51,000 a year, for 33 years, with an yearly increase of 5 per cent. When just 11 acres of the same land was leased to a village resident after an auction, it brought in Rs 94,000. But then, the MoU between KDES and the village panchayat stipulates that five per cent of seats would be reserved for children from Shilani Kesho, and that they’d be exempt from paying tuition fees, admission fees or any school funds. Sehwag, inaugurating SISJ on October 9, raised the student quota to eight per cent.

Yet suspicion is rife among the villagers that they’ve fallen victim to some sort of fraud, that some “big people made a lot of big money” and gifted the land to SISJ “practically for free”. By all accounts, the 23-acre piece of land with SISJ is worth Rs 20 crore or thereabouts. How is the money earned by the village by leasing out land being used anyway? For tarring a lane or fixing common property, people say, but winks and lowered voices suggest that it, too, is misused. Perhaps this is the reason why they aren’t agitating against the alleged loss incurred due to the deal with KDES. Most of them say it’s also because if they ask any questions, clan and village elders, themselves under pressure, tell them to forget it.

But not Rajesh Chahar, a former armyman and an amateur coach. “Half of that land was earning Rs 94,000 for the village,” he says. “How could all of it be given for Rs 51,000?” He says the panchayat and KDES had agreed to a lease amount of Rs 3 lakh, which was then reduced at the state government’s instruction. He adds the children who are supposed to be paying nothing still have to dish out Rs 60,000 for “transportation and food” (the school says the figure is Rs 36,000, and optional). Their other complaints are more trite—that the kids aren’t given enough homework, that the name of the village doesn’t appear on school signboards and stationery. 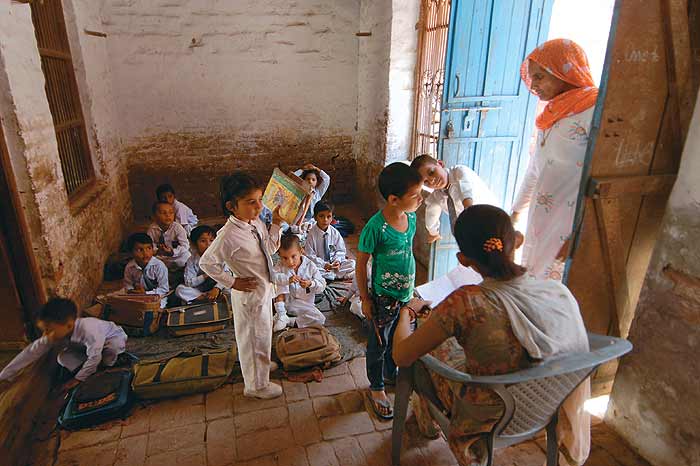 In a more serious vein, Chahar alleges that Sehwag did not have permission to build a school, and that the panchayat had passed a resolution to lease the land to KDES to build only a sports academy. Yet the MoU between KDES and the village panchayat says the land is to be leased to set up a “school and sports academies”. Claiming the panchayat resolution was passed even before the KDES came into existence, Chahar says the previous sarpanch signed the MoU for “reasons you can easily guess”. Chahar’s brother had filed a PIL before the Punjab and Haryana High Court, but it was not admitted for hearing. They plan to petition the Supreme Court.

In the Block Development Office in Jhajjar, the man in charge is ready to tear his hair out in frustration. “The panchayat signed an MoU with KDES, the DC approved it, as did the panchayat minister and the state cabinet,” he says. “What do we do if people suspect there’s something wrong in every deal? There are 71 villages in my block, and there are some 10 RTI applications against the sarpanch or panchayat of each village. Perhaps corruption is so rampant, they feel there’s some wrongdoing to be unearthed in every deal!”

Vishnoo Mittal, the school’s CEO and an old friend of Sehwag, sighs in exasperation. “Anyone who’s not benefited from the school is unhappy,” he says. “We’ve employed 17 people from the village, 117 from the district. We’ve given free admission to 12 children from the village, and waived off admission fee for some 12 others who wanted to join,” he says. “What do we do? If a big man does something, people think he’s a chor.”

Mittal says the absence of word “school” from the panchayat resolution was a clerical error. A second resolution does say that “five children” from the village will benefit from free education at the institution. “We made it five per cent instead of five pupils, but requested the government to reduce the lease amount to Rs 51,000 from Rs 3 lakh,” he says.

Even the man in charge of the Happy School says the village has benefited. The benefit to the village in one sense is around Rs 9 lakh, the total amount of the waived fees for 12 children as of now.

Sehwag says cricketers who fail struggle to find a job, a factor behind the high incidence of depression among them. He says education would prevent this. To ensure this vision to materialise, Mittal wants “needless controversies” to end. To this end, he has agreed to raise the lease amount to Rs 1 lakh, after the panchayat passes a resolution to this effect. “We’ve also agreed to refund the Rs 500 registration fees for pupils who took the entrance test but couldn’t clear it,” he says. And yes, the school will have a signboard saying it’s located in Shilani Kesho—even if the contrast between the two could not have been sharper.