Make A New Family In Autumn 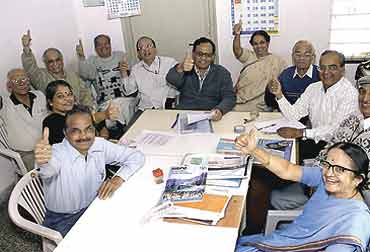 outlookindia.com
-0001-11-30T00:00:00+0553
When doctors advised Pune-based Usha Rairikar a major surgery in 2004, the retired Class-I officer, living alone and on the wrong side of 80, firmly told both her US-settled children to stay put there. "Don't worry," she reiterated on the phone, hours before being wheeled into the operating theatre. "I'm in safe hands." During the ten days she spent in hospital, a caring presence by her bedside, a daily supply of home-cooked food and fresh flowers helped hasten the healing process. On the day she was discharged, a couple waited to take her home—not to her own home but theirs, where she convalesced for the next fortnight. Around the same time, 83-year-old Dr J.D. Parikh in Baroda, one of the last living students of Albert Einstein, was diagnosed with an incipient vocal chord cancer that left him temporarily speechless. The absence of his two sons, both of whom live in the United States, together with the prospect of entirely losing his voice, did initially fill him with anxiety. That was until he came upon a battery of helping hands to see them through this crisis. Over the next eight weeks of radiotherapy, Parikh and his wife were not once stranded for support.

The bonds between Rairikar or Parikh and those who saw them through their crises are not relationships of blood or philanthropy, but bonds of empathy. For they too are parents with either one or all their children pursuing their dreams and their fortunes in foreign lands. The networks of mutual support and friendship between these aging parents of NRIs keep at bay their niggling fears and blunt the pangs of loneliness in their twilight years. "Even the closest relatives wouldn't have done what they did," says Rairikar. And when Parikh regained speech, he addressed a meeting of these parents to thank them. 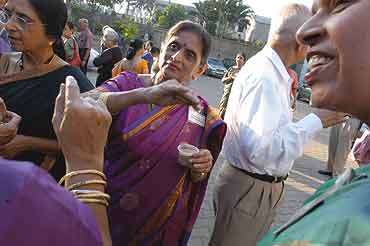 Such meetings are not uncommon in cities like Mumbai, Pune, Bangalore, Nagpur, Baroda, Ahmedabad and Coimbatore, where parents of NRIs have banded together into formal associations; similar associations are being formed in Rajkot, Surat and Jamnagar. They meet every month; organise excursions, get-togethers and recreational activities; celebrate festivals; bring out newsletters and directories of members; and in times of need provide a rock-solid support network. At a more practical level, they provide lists of recommended vital service providers, hold lectures and workshops on typical concerns like travel, insurance, healthcare, and foreign exchange; teach members to become computer-savvy enough to stay in regular e-mail contact with their children; help those travelling abroad, especially first-timers, with visa and passport modalities, ticketing, medical insurance and the like; and stand guard over each other's personal and material well-being. Some associations even advise their members' NRI children on investment, property ownership, taxation, repatriation of funds, inheritance, and dual citizenship, and help returnees relocate and resume careers and children's education. Now, an all-India body called the Association of Parents of Indians Resident Overseas (APIRO) has been mooted for greater synergy among these associations.

All these associations started out in the same way—a parent or two seeded a group by announcing a meeting in a newspaper, held the first meeting with a modest turnout, mostly 25-30 couples, and grew that informal group into a full-blown association. Pune's Non-Resident Indians' Parents' Organisation (NRIPO), founded in 1994 by N.L. Abhyankar, a retired high court judge now touching 99, has grown into the largest such association with over 500 members, including eminent scientists Jayant Narlikar and Dr R.M. Mashelkar. The Pune NRIPO even organises foreign trips and stages entertainment programmes. "Weeks of spirited preparations keep them occupied and motivated," reveals Kumar Kiwalkar, vice-president. The association has tied up with 16 of Pune's leading hospitals, where members can simply produce a card to get admitted at any hour of the day without paying a deposit. What's more, all help is available right within the association—there are doctors among them to advise on health, and legal experts to guide on will, asset and property management through the association's 'Will-and-After' cell. Under its innovative 'One-by-two' initiative, every ailing member receives care from two members who live nearby. 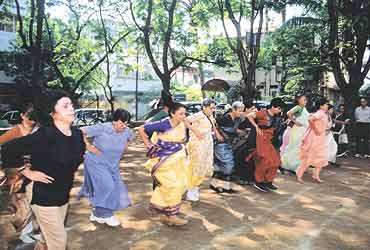 In 1998, Ambuja Narayan formed NRIPA, Bangalore, when she noticed that "the NRI parents, although not really old, were mostly twiddling their thumbs here, while the NRIs themselves networked rather well". Today, NRIs push their parents to get involved in the 250-member association. In 1999, Wing Cdr (Retd) Madhav G. Hastak booked a hall in Nagpur at his own expense and called a meeting of such parents, and thus was formed the NRI Abroad Parents' Association (NAPA), which has 80 members. In 2002, Madhusudan B. Mehta and some others convened a similar meeting in Baroda. Recalls the 72-year-old founder-president of the 80-member group: "We booked a hotel room with food for 30 couples, ready to foot the bill if none came; luckily, 25 of them attended." People who never knew each other, exults Mehta, are today the best of friends. In Coimbatore, the Association of Parents of NRIs, focused exclusively on parents of NRIs living in North America, came into being in 2003. Says Pratap Gokuldas, founder-president of the 60-member association, "Our key objective is collective bargaining to solve the problems of NRIs' parents." Ahmedabad got its NRIPO in September 2005 and the membership has already risen to 148 couples, says its founder-president Hemant Shah. 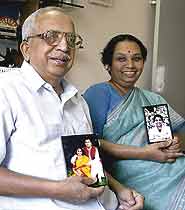 To many, these associations are like extended families, who step in when the unexpected happens. When Pune-based Meera Bharvirkar landed in hospital in 2005 with broken ribs after an accident while her husband Ramesh was away visiting their children in the US, her first call was not to a relative, but to a friend from NRIPO. Or when floods inundated Baroda that year, Neelkanth and Vasudha Jambhekar, visiting their two children in the US, didn't need to panic: Prannath and Pushpa Sikka not only waded through the water to salvage the ground floor of Jambhekar's bungalow, but also got it disinfected. Others like Bangalore-based Heera Rao have found the NRIPA an effective antidote to loneliness and insecurity. "NRIPA has added a new meaning to my life," she says. Rao, 57, lost her husband 20 years ago and raised two children amid tremendous hardship. When they both went abroad, she plunged into activities, ranging from teaching computers in schools to joining a health club. But that didn't really fill the void in her life. In 2000, she joined NRIPA. "While the trips and outings give me a much-needed break from life's monotony, interacting with other parents is highly enriching." The best part, says Rao, is the safety the association offers to single women. "I can mix with anyone without the fear of being misunderstood. And since these people come from diverse professions," she adds, "their company is truly stimulating."

Boston-based Sumana Bhat says NRIPA offers her Bangalore-based sexagenarian parents B. Janardhan and Susheela a great social networking opportunity. "The calling chain its members maintain reassures me that they won't ever be untended," she says. "Children settled abroad are torn between two worlds," observes Dr Mashelkar, whose two daughters live abroad. "Such organisations are very comforting for them too. And they provide a good model for geriatric care as well." Indeed, as many NRI parents are finding out, nothing thaws the cold realities of empty nests like the warmth and unhesitating support that these associations of NRI parents provide.

Wicked Wolf In The Nursery