Gets way too random and hit and miss. Doesn’t feel fresh enough and lacks the vital spark. 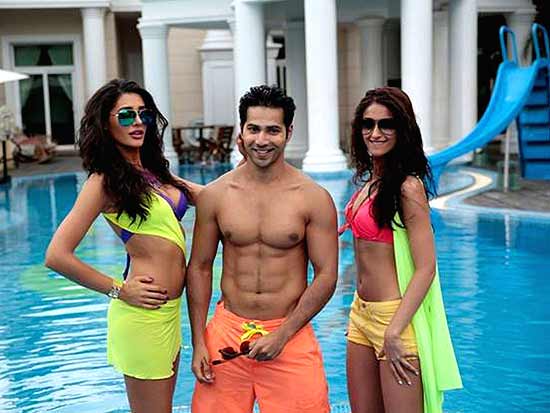 There is a scene in Main Tera Hero with the lead star Varun Dhawan at the centre, which begins with ‘chicken peri-peri’ and ends at ‘pairi pauna’, all in a matter of few minutes. The scene made me long for the golden age of madcap Hindi comedy, starring Govinda who, with perfect comic timing, would have added just the right dash of ene­rgy and zing to the proceedings.

With Varun it remains another inane moment worthy not even of a momentary cackle. Perhaps it’s too early to be overly critical, after all, Main Tera Hero is just his sophomore eff­ort. But since he has been pitched as the new-age Govinda (in the buffed up body of a Salman Khan) the comparison is also inevitable. And he sure does have way too long to go to get into Govinda’s shoes. Govinda did his comic routines with an obvious joy and ease. Varun goes about it mechanically with an impassive face. What he does fare very well in are the dance numbers. Be it Besharmi Ki Heights or Tera Hero Idhar Hai, it’s high-­voltage moving and shaking all the way.

The film, as with most Dhawan comedies, doesn’t have much to offer by way of logic. Sreenath Prasad alias Seenu (Varun), very infamous in hometown Ooty, goes all the way to Bangalore to study but falls in love with pretty Sunaina (Ileana), who in turn is being pursued and harassed, to her consternation, by cop Angad (Arunoday). To confound the already thickening tangle of plot, Seenu finds admirer number two in Ayesha (Nargis), the daughter of a Bangkok gangster (Anupam Kher). Which gives the cast a much-needed opportunity to go on a holiday-cum-shoot to Thailand.

Even the most illogical of films have their own hidden logic, but Main Tera Hero gets way too random and hit and miss. There is no spine of a story to hold it together. The Dhawan brand of effortless madness goes missing. He tries hard to raise the laughs. There are way too many smart but silly lines (sample: Jab main pampers mein thi to mujhe pamper karte the; Dhanya hai wo father jiski top se tum nikle) but not enough zany situations. The perennial dialogue with God—from Ganesha to Jesus via Shiva—gets irritating. As do the series of ‘knock knock’ jokes. Most of all, despite a cast of youngsters Main Tera Hero doesn’t feel fresh enough and lacks the vital spark. Ileana makes a pretty presence, Arunoday doesn’t seem to know what to do with himself and his towering frame. The most unwittingly funny thing about Main Tera Hero is Nargis Fakhri. She is so spectacularly dreadful in her introductory scene in the film that she would make every viewer in the halls believe he or she can act better.