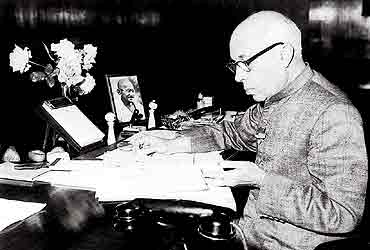 The Essential Writings Of Jawaharlal Nehru Vols 1 and 2
By Edited By S. Gopal By Uma Iyengar
Oxford University Press Set Price: 2,450 Pages: 740 and 741
From the mid-1920s till his death in 1964, Jawaharlal Nehru thought, worked and wrote for and about India. It was an extraordinary accomplishment, unparalleled, I dare say, in the annals of humanity. There have been other leaders who have worked with the same intensity, tenacity and dedication for the freedom and advance of their peoples. In modern times, Gandhiji, Lenin, Mao, Ho and Mandela come to mind. Indeed, in terms of leadership and accomplishment they surpass him. Yet he remains uniquely a leader who was also a creative artist at the highest level.

Anybody who goes through these two volumes will be amazed at the sweep of his concerns and his so evoking them as to compel attention and involvement. And this was not the record of just a few years but sustained through decades. Throughout this period, he was also traversing the length and breadth of India and the world, speaking to and organising masses, besides functioning as the first Prime Minister of India or, as he preferred to put it, working as the first servant of the Indian people. Tireless he was and the living embodiment of the truth of William Blake’s words, "energy is eternal delight".

We are certainly indebted to the two editors for the herculean labour of wading through the enormous material, selecting and arranging them to give us access to the "Jewel of India", as the Mahatma called him.

It is sad that S. Gopal completed the work with Uma Iyengar but died before its publication. He was a historian, biographer par excellence and an elegant stylist. His earlier anthology of Nehru’s writings published in 1980 has set the framework of Essential Writings. The latter, however, is not only more voluminous but also more comprehensive.

It is interesting, incidentally, that both in the earlier anthology and the present volumes, pride of place has been given to Panditji’s letter to the chief ministers in 1960 about the need to replace the "humble broom used by our cleaners and sweepers as well as in our houses" by one with a long handle. This would not only be better functionally but also ease the sweeper’s burden. This well illustrates the unaffected concern Nehru had for those performing even menial tasks and his search for something practical which would improve their lot.

What comes through in Nehru’s responses to India are certain unifying themes. One is the constant effort to find the link between tradition and modernity. Another is the insistence on combining national unity with radical socio-economic change. Yet another is the indispensability of uniting morality with politics. It is to these themes politicians must return if they are to be worthy of their heritage. As Nehru’s life and work emphasise, without politics and politicians national salvation and advance cannot be won. It was this understanding that enabled him to wear himself out in the service of India and its people.

It is as well that we remind ourselves of the work and worth of this peerless leader at a time when he is being denigrated as part of a campaign to reverse the achievements of the national revolution and to destabilise the state. It is sought to be made out that he was an unworthy successor to the Mahatma. Also, that his dogmatic fascination with Soviet Communism led him to place India on the path of economic stagnation and bureaucratic corruption.

Any reader of Essential Writings would discover or rediscover that the Mahatma and Panditji had a deep affection for each other. Nehru could not have become what he did without both learning from and disagreeing with Gandhiji. He was and remained a child of the Mahatma in politics but a truant child, as he himself put it. Panditji’s great achievement was to go beyond the Mahatma while holding on to him.

As for what has been achieved by Nehru as prime minister, not only India but the entire troubled world has no better model, economically, politically and for social change than the mixed economy and civil libertarian parliamentary democracy that he established. Essential Writings establishes this beyond doubt.

Perhaps the editors would have done better to have a chronology-subject linkage. Still better would have been an effort to keep to the size of the earlier anthology. It would have made the collection more focused. But for what we have been given we are grateful and so would be all readers.

(Mohit Sen has recently published his memoirs, A Traveller and the Road: The journey of an Indian Communist.)