Anti-incumbency is out. Pro-incumbency, in which political performance will be judged on good governance, is in 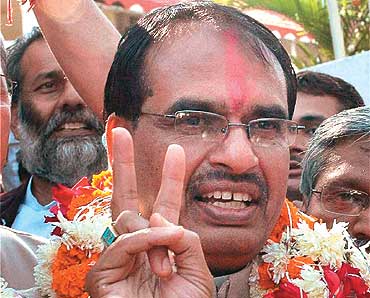 Why BJP Won: The party strategised effectively. Neutralised anti-incumbency by dropping over a third of its sitting MLAs. Shivraj Singh Chauhan was projected early as the CM candidate. His campaign included a ‘Jan Aashirwad’ yatra. Even before polls were announced, Chauhan had addressed over 1,000 meetings. Development was his main plank. Finally, the welfare schemes launched during his chief ministership helped the BJP win. Chauhan's down-to-earth image also went down well with voters.

Why Congress Lost: Too many cooks spoilt the party. Suresh Pachauri, Kamal Nath, Jyotiraditya Scindia, Arjun Singh, Digvijay Singh, Ajay Singh...all heavyweights pulling in different directions. Their constant bids to undermine each other ensured that the party floundered in regions dominated by rivals.

Victor-Speak: "Anti-incumbency is out. Pro-incumbency, in which political performance will be judged on good governance, is in."—Shivraj Singh Chauhan