The political ‘creeper couch’ is no myth. But there can be more to the game than just compromise. 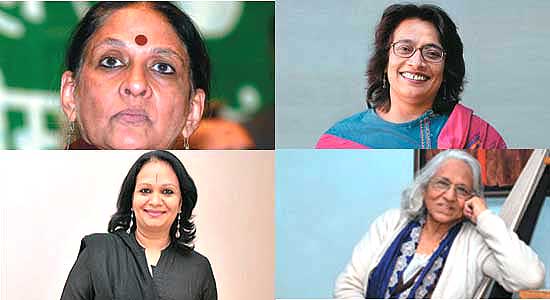 Everyone knows how Noor Jahan, the twentieth wife of Mughal emperor Jahangir, used her sexual powers to virtually become one of India’s most powerful women. But post feminism, have women developed more scruples and disdain to use their charms to get ahead? Breaking the silence on a subject that’s now considered politically most incorrect, women politicians confess not much has changed in politics since Mughal times. “Everyone has to give something to get into power. Men give money and women usually give their bodies,” says Ramnika Gupta matter-of-factly. In her seventies, Ramnika is a member of the CPI(M), a tribal rights champion, former trade union leader and politician who—to use her own phrase—has “passed through the hands” of several men in her quest for political power.

“George has male admirers who buy him kurtas or get him fish curry. If I do it, it’s perceived in a different light.”
Jaya Jaitly, Ex Samata Party chief

Ramnika’s “initiation” into politics began with the late K.B. Sahay, when he was chief minister of Bihar. Wanting some government land for a women’s training centre, she approached Sahay at a public meeting. He asked her to meet him at his office at 4 am. Young and handsome, she probably knew what that meant. When the office door closed behind her, Sahay stood up and said, “Here is the chief minister standing before you. Ask for whatever you want.” Ramnika says Sahay embraced and kissed her, but she didn’t mind because he immediately signed the paper she held out for sanctioning the land. “I was also flattered by his attention,” she recalls. “I was thrilled to have a man as powerful as him kissing me; it felt as if some of his power was transferred to me.”

That cuddle won her another reward: Sahay invited her to join the Bihar Pradesh Congress Committee, one of the most powerful posts at that time, which any man seeking political power would vie for. Which is probably why she agreed to visit the state Congress chief, Raju Mishra, in his home to put forward Sahay’s recommendation. This time, she says, she had to pay a higher price. She let him have his way and did not complain. “The only choice for a woman starting in politics is to either quit or accept the fact that she has to sleep with some of them at least,” she says. “You have to compromise until you are in a position to reject them.” What she could do, however, was to try and avoid being anywhere alone with the BPCC chief. For her compliance, he nominated her as Bihar’s representative at the Jaipur AICC meet in 1966.

“A woman is condemned if she uses sex to her advantage. Why can’t she play hard by any rules, just like men do?”
Shoma Munshi, Sociologist

Some of these “compromises” were not voluntary, Ramnika recounts. Like the time she approached Neelam Sanjiva Reddy, then Union finance minister, about nationalising the Dhanbad mines. He asked her to meet him in the Circuit House after the AICC session and invited her to drive down there with him in the buggy that was provided for the party’s bigwigs. When they got to his suite, the finance minister bolted the door from inside. Taken aback, Ramnika said: “But I haven’t even had lunch yet.” Reddy’s response was to go into his bedroom and reappear before her, stark naked. He overpowered her so she couldn’t escape, Ramnika says. But later she complained to the president of the Congress women’s wing and her friend Yashpal Kapoor, who was then Indira Gandhi’s secretary. But she was told to shut up and put up with it if she wanted to be in politics.

Fed up with what she calls the “creeper culture”—women using sex to get a toehold in politics, or for easing the way for their husbands, fathers and brothers—Ramnika quit the Congress and joined the Socialist Party. “Thanks to Ram Manohar Lohia, the culture in the Socialist Party was very different,” reminisces Ramnika. “You were free to choose who you slept with. Nobody could force a woman to sleep with him if she didn’t want to.” But even so, she says, men you rejected sexually could make your political life a hell. Ramnika did not quite reject Shri Babu, a minister in the Socialist government in Bihar, but she dared to break off with him, leading to a bitter political conflict. She then sought asylum in the arms of the Congress chief minister Kedar Pande, even rejoining the Congress at his urging. “He wasn’t very charismatic, but at least I got protection from sexual assault, and he made me an MLC and later an INTUC leader.”

“Far from opening doors, my relationship with Hegde shut doors. My career is the result of my hard work.”
Pratibha Prahlad, Dancer

For Ramnika, who in her heyday could conjure up a hundred truckloads of people for political rallies, her sexual power was a secondary asset, a “friendly power” to be used whenever the going got too tough. But to depend solely on it to build a political career would be unwise, according to her: “If you don’t have power at the roots or pull at the top, it’s pointless just using your body—you’ll lose.”

Former president of the Samata Party, Jaya Jaitly, agrees: “You have to earn your spurs in politics. You are undermining your own potential by relying on your good looks to get you places.” Things have changed quite a bit since the ’60s and ’70s, when Ramnika was trying to negotiate her own space in the political arena, but not that much. “It’s not quite the casting couch system of Bollywood, but yes, most women do need to use their sexual power, however mildly—batting their eyelids, flattery, beautification—to survive in politics. To get into the race, you need money. And women don’t have money.”

As sociologist Shoma Munshi puts it: “Men use money and success as power; women in turn use sex to gain power. How else would she negotiate in the very system which restricts her?” According to Shoma, sex and sexuality can be parlayed into power, but it’s a fleeting advantage and offers diminishing returns in comparison to other advantages.

“I was thrilled to have a man as powerful as Sahay kissing me. It felt like some of his power passed on to me.”
Ramnika Gupta, CPI(M)

And then there’s the general disdain to contend with, which is why many women reject anything they get as women so as not to seem as if they are exercising their sexual power. As Jaitly says, everyone needs a mentor in politics but when she chose George Fernandes, she ended up being labelled his “sidekick”. Jaya says she worked hard and sincerely in all the posts thrust upon her, but she was still resented as someone who had enormous influence over George. “In fact, it was the other way around. I admired his grit, integrity and fearlessness, that’s why I chose him as my mentor.” And although George never undermined her as a woman by helping her get into positions she didn’t deserve, others attributed it to their relationship. “It’s the easiest thing to say about a woman. George has male admirers who do more for him than I do—buy him kurtas, banians, get him his favourite fish curry from Calcutta—but if I do the same thing, it’s perceived as something else.”

Similarly, dancer Pratibha Prahlad says her relationship with the late Ramakrishna Hegde was often misinterpreted. “Far from opening doors for me, my relationship with him shut many doors. What I am as a dancer is because of my own abilities and hard work and nothing to do with him.”

“The only choice for a woman starting up in politics is to quit or accept she’ll have to sleep with some men. You compromise till you’re in a position to reject them.”

As a young woman, Pratibha recalls, her attractiveness caused her endless trouble. As a journalism student in Bangalore, her professor failed her, declaring that “attractive young women like her would use their sexual power to rise to the top in her career”. When she went to Chennai to learn dance, young men started following her. When she had some of them arrested, their defence was: “She dressed in pants, was learning dance, so we thought she was available.” Even the police found it hard to believe that someone who learns dance could be an educated girl who didn’t aspire to be a film extra, says Pratibha. For years after that, she says, she oiled her hair, braided it, wore nylex saris, a bindi and a mangalsutra, in order to escape unwanted male attention. It’s only when she went public about the sexual molestation by her dance guru that Pratibha was able to kill her inner demons. “God made me a woman, so I may as well be comfortable with it—as long as I don’t overtly use it to get something.”

“A woman is rarely condemned for using any of her other assets,whether it’s family background, fancy education or wealth, to her advantage,” points out Shoma. “Yet she is widely condemned if she uses sex. Can a woman not play hard, and play to win, by any rules necessary, like men do?” For Ramnika, the answer is clear: “Either do it without guilt or don’t.”