Reading the book was a bit like going to an old storeroom and finding a few old gems worth polishing and keeping; but also quite a bit to throw out. 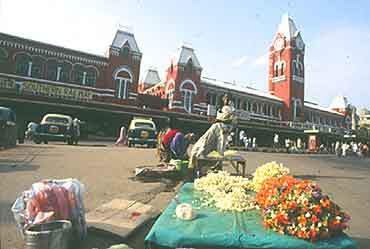 The Unhurried City—Writings On Chennai
By C.S. Lakshmi
Penguin India Rs 395; pp: 264
The terrible temptation of reviewing a book like this, a rambling series of facts, images, stories and memories of Madras/Chennai, is to add your own pinch of pepper to the stew.

The essays (‘articles’) in the volume occasionally remind you that Madras can be the big bad city, but mostly they evoke nostalgia and affection. I am not surprised. Like most of the contributors to this volume, I lived in Chennai when it was Madras. In the Madras of the ’70s, it was difficult to find a place to live if you were that anomalous creature, a single woman who chose to live alone. But once I found this elusive residence, various neighbours I didn’t know sent me trays of food on the evenings I had music lessons. Madras taught me how to juggle the contradictory claims of different worlds in the same city. My Madras had kachcheris of inspiring music, but also reading groups and public meets and women’s organisations and rallies, all challenging the complacent rigidities of the city I grew to love.

All this is there in The Unhurried City in some form or the other: essays, poems, short stories, photographs and drawings. In fact, there may be a little too much. Reading the book was a bit like going to an old storeroom and finding a few old gems worth polishing and keeping; but also quite a bit to throw out. Several of the poems and short stories take place in a less than idyllic city, with its dying beggars, crowded slums and perennial water problem. Together they make a fine portrait of a Chennai where many people cannot find what poet Atmanam calls "a place to sit". But they make up one sort of book, the essays another. And of the essays, the ones that stick to a single theme—such as S. Ramakrishnan’s tale of looking for a room in Madras or Vaasanthi’s on the cultural ‘season’ or Ramachandra Guha’s on cricket—make for the best reads.