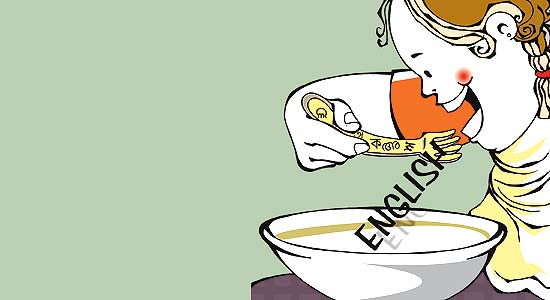 The “English medium” tag has an exalted status all over India, but in Kerala the obsession with English takes a rather virulent form, because the rich, the middle class and the poor all have their sights fixed on employment opportunities outside the state. I would in fact suggest that in no other part of the country are locals so ashamed of their own language as in this state. In fact, we have even succeeded in convincing the rest of India that we are the custodians of the English language, and teachers of English from Kerala are in demand all the way from Rajasthan to Sikkim. Meanwhile, education for children between the ages of five and eight in the country’s most literate state is in a tragic mess as a result of this “English medium” mania.

The state education department’s syllabus is actually a good one, in that it keeps academic content limited, emphasises the development of other skills, and uses Malayalam as the language of instruction. But this is a syllabus honoured in default only in government schools. Parents who can afford the fee are invariably sending their children in droves to private schools where they are compelled to speak in English, even in kindergarten classes. Textbooks in all subjects are written in pidgin English, and after three years of “English medium”, a child cannot converse in English. Do you, for instance, recognise this version of a nursery rhyme: “Oranjussa lemuss all so bending! All dull school girls also bending”?

The schools are advertised for their “anglo-indian teachers”. sometimes the teachers are even paraded in a jeep. in one town, this caused a run on the school.

The new English medium school, spreading to our towns—indeed, all over the country—introduces itself thus: “Holy Ghost English Medium School, Anglo-Indian teachers to teach! English! Horseriding! Ballet Dance! Piano Lessons! Swimming Pool!” Sometimes the Anglo-Indian teachers are even paraded in a jeep. I recollect with shame that in one town, the inhabitants were so impressed by this display that they rushed to enrol their children.

Watching these children being taught is to be amazed, and horrified. In an English recitation class in lower primary, for example, you will hear 40 children chanting in unison, with accompanying actions, “The fox jumped and jumped and jumped. The grapes were too high. The fox said, ‘The grapes are sour’.” The intonation must be just right—but understanding what you are saying is not a requirement.

What this “English adventure” does is to prey on a child’s vulnerability rather than build on his or her strengths. It turns the child into a dumb listener, leads to psychological numbness and loss of self-esteem. To deny a child the comfort of using her mother tongue in the early years of education is to commit a grievious crime. The English hysteria also undermines the children of the poor who study in Malayalam-medium schools. Instead of gaining from a reasonable syllabus taught in the mother tongue, they are mired in a feeling of inadequacy. This is reinforced by poor teaching skills, which are the norm.

The lives of our young children all over the country need to be changed by allowing them to learn with understanding. An experiment conducted by us in a small school I run in Kottayam, Pallikoodam, shows it can be done. We committed ourselves to using Malayalam as the language of play, learning and communication for the first four years in school, and found the learning process enriched beyond our wildest dreams by the use of the mother tongue. Children learn much more, and with joy and understanding. They learn to compose poems and write stories; they grow in mental stature. Textbooks and toys are monitored to ensure that children are not exposed to material that might induce them to belittle their cultural roots. Spoken English is introduced only in Standard II, and by then the children are no longer afraid of a foreign language. They use the learning skills they’ve acquired to master English. Given the current hysteria over learning English at the youngest possible age, I thought our comparatively wealthy and often English-speaking parents would withdraw their kids. We were wrong. The children stayed. This experiment shows it is possible to reverse the tide.

(Mary Roy is a Kerala-based educationist.)