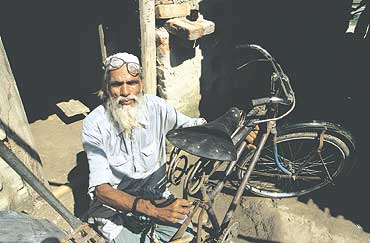 outlookindia.com
-0001-11-30T00:00:00+0553
The "Noor bicycle" is special. It’s an ordinary bike, but becomes a cycle boat in water. Imagine a conventional bike with a few extra attachments—four rectangular air floats and fan blades attached radially to the spokes of the rear wheel; the floats keep the bicycle from sinking and the blades, when one pedals the bike, allow forward movement.Mohammad Saidullah’s amphibious bicycle has been praised by President Kalam who noted it could be useful for defence personnel too.

On the president’s instruction, the bicycle was kept by the National Innovative Foundation for further study and development. Noor was Saidullah’s late wife, and he names all his innovations after her.The 66-year-old has built a fan that runs without power, a mini-tractor for transporting materials, a fodder cutter-operated centrifugal pump with discharge capacity of 10,000 litres per hour and a mini-turbine for electricity generation. The idea of making the bicycle came to him when his village got marooned during floods. But there are no takers for his ideas.

"I know there is no value for my innovations," says a disappointed Saidullah, who sells honey, earns a mere Rs 1,300 a month. All his trophies and citations, including one awarded by the President, are rusting. He recently received a Rs 1 lakh cash prize—he has spent half of it on developing an amphibious cycle-rickshaw and the rest on clearing loans. But he still has three new ideas: to develop a bicycle that will run 100 km without any manual labour, an automatic mini electric powerhouse which could light up four bulbs or run four fans for 24 hours for a whole year without any expense and a mini-car that would run without petrol or diesel.