The intent of litfests is to dole out patronage from within the temple. Some of us are better off without. 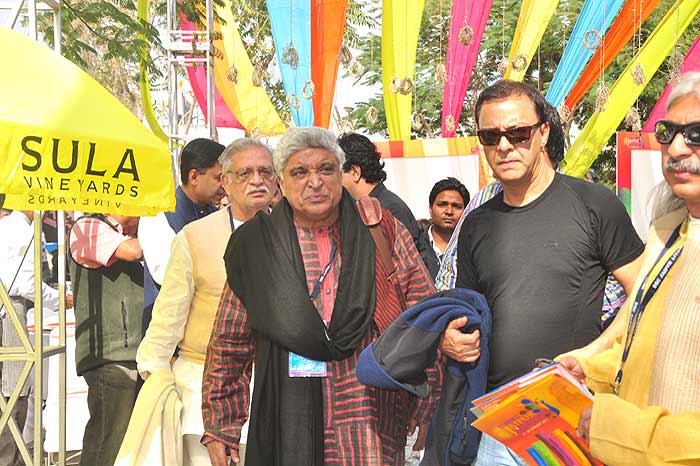 Literature has always been an elite pastime. The intellectual caviar of the rich and privileged. It is one of the estuaries where the old rich and new rich commingle, muddying the waters of class,
caste, race and lineage, providing wannabes with an instant In, has-beens with an extension on warranty. WASPY-old Boston Brahmin dynasties mix with former purveyors of dynamite, earthmoving equipment, farming land redevelopers, to name only three of the key backers of major literary prizes.

It used to be that the literary prize functions were the most notable events of the high-society calendar. They have now been usurped, shoved aside, or in some cases, subsumed by the chic trend of litfests. But at heart, they are really just the same thing: people with money that was earned from everything but art eager to spend some of that money on the apparent patronage of art. Old money, new money, same old bottle.

Thanks to the happiness of searchable tags, I did a quick look-through of my invites to literary festivals over the past few years. An astonishing sum of 143 invites appear to have filled my inbox, rivalling spam mails for Cialis and penis-lengthening devices. That doesn’t include the phone invites or the occasional (but now rare) snail-mailed letter. Even discounting an overlap of invitations—many have tried more than once, using alternate ‘contacts’ in the hope that an old friend or colleague would be more persuasive—that is still a staggering number of litfest invitations over the past four years or so.

I’ve had the distinction of turning down every single one of them. Including the ones that offer return business class airfare for myself and spouse, plus a three-day all-expenses-paid trip to London for an exclusive event for which the organiser, a self-declared “huge fan”, even claimed to have a sponsor in place. That remains a standing invitation, repeated annually, as do several others. There are also the usual share of miffed missives berating me for not supporting literary ventures, not interacting with my readers, blah blah blah.

The thing is, I actually do see the point of literary festivals. They seem like great fun actually. You get to extricate your superglued bum from that writing chair, fly to some spot where you would usually think of taking the family for a vacation, see and be seen, have a few laughs, talk a lot, read aloud a bit, faff around, smile for pics, then return said bum to said chair and say to the endangered species on your screensaver, “That wasn’t so bad.”

Now multiply that by 143. Or to be fair, about 30 times a year, more as time passes, since litfests in India are like rabbits in Australia. If an author, any author, attends 30 litfests a year, that would mean at least three days every fortnight, not including travel, recovery—these things can be exhausting, I am told—and the usual travel bug, the follow-up meetings and interviews, the pre-meetings and interviews, and the like. Some litfests go on for five days, others for just three. That is an average of 200 days a year spent travelling, talking, seeing and being seen.

Do you know people who spend 200 days travelling for work? Do you know how they feel about their jobs after a few years? Do they gush about the glamour of travel, of meeting new people, of 5 am flights and midnight meals in airport cafetarias? And that’s their job.

An author’s job is writing. You may not look like a movie star, you may not have a TV personality or a great voice, may not be eloquent and charming in person, or dress sharp or give great quotes, but you write a great book, people love reading your work, and that is the magic of books. It is the only form of entertainment left that a person can enjoy alone, engaged in that indescribable interaction between the word and the mind that nothing else can provide. It is the last form of pure storytelling that connects the writer and the reader directly, from my hand to your eyes, my heart to your heart. No intermediaries required. No commercial breaks. No advertisements. No movie stars, VFX, 3D glasses or A.R. Rahman OST. Just great writing and you. The last great love story.

Yes, I know there are authors who manage to attend a whole bunch of litfests and still produce great books. But over time, which improves the most: their onstage banter or their writing? I cannot quote you statistics showing that the writers who frequent litfests most often also tend to show a downslide in literary output or quality, but then I cannot show you the converse either: no writer ever claimed that litfests improve his or her writing.

So why do all the Nobel winners and Booker winners turn up then? Perhaps because they are still tied to the age-old belief that artists need patrons. Rich, powerful, influential, well-connected patrons. Legacy publishing has thrived on its nepotism after all. The Anna Hazares of the world can struggle to reform civil service till their last fast, but they will never dare to even touch the hem of the golden inner circle. In the publishing world, if the media magnate who owns the publishing house has a son or daughter eligible for the job, you can be sure he or she will ascend to the seniormost post in that publishing house.

If a senior editor has a brother, a sister, a friend, or even a lover who writes a book, you can expect it to get published sooner than that of the most talented unknown. If a writer with a book of short stories comes from the right family and has the right connections, expect that anthology to be promoted and sold with far greater hype than the most brilliant work of literature penned by a hungry young debutant with no social connections and no social status. Publishing people tend to be from the same schools, colleges, social circles, and of course, the same communities and clans.

How many non-Hindu non-Brahmin professionals are employed in Indian publishing? How many are permitted to rise to the top of their firms? How many authors who lack the proper connections are shunned and ignored only because their work came without a recommendation from another editor, socialite friend, or even an upper-class or upper-caste nod.

Maharajahs recommending artists to other maharajahs. Or maharanis as the case may be, since gender equality is one of the few bastions Indian publishing has been able to breach, thankfully. But still patrons who believe that they are the gatekeepers of culture, and that it is their responsibility to keep the riffraff from the door, the Philistines outside the temple, the low-castes outside the Brahmin sanctum.

Litfests are only a new chic trend indulged in by this inner circle. Book prizes remain a favourite sport, but litfests add a new level of razzmatazz to the same-old same-old. Old booze in new bottles. It is really just about the money, honey. The biz of fizz. Talking about books is so much sexier than actually sitting at home reading them. Tweeting non-stop all day long about Rushdie attending/not attending/attending/not attending the Jaipur LitFest is so much more entertaining than actually reading the new Rushdie; tweeting from a fest while listening to Rushdie tops it all.

It’s a private party and even though the line says “Everyone’s Invited”, they retain the right to decide who “Everyone” is. Or anyone. All that money, all that effort, all that energy, organisation, coordination, travelling, planning, operational logistics, talking and debating, sassing and faffing, boozing and schmoozing, it’s not about books at all. It’s about riding on the goodwill and glamour generated by books and literature, great writing and great authors, taking all that classy chic intellectual pride and amortising it into sponsor-sized chunks of social currency.

Litfests are about the power of the people who manage them, attend them, sponsor them, promote them, earn from them. Maharajahs underwriting kavi sammelans. Not because they think poetry must be promoted. But because poetry promoted lavishly is sexy. The actual act of living, experiencing, writing, revising and producing great poetry is not.

Litfests are to literature what lavish movie premieres are to great filmmaking. One has absolutely nothing to do with the other. They would promote the movie on exactly the same scale if it was a turkey (even if they knew it was a turkey) or the greatest film ever made. It is about rich and powerful patrons—even if they aren’t individually wealthy, they still have the power of the corporate chequebook at hand—celebrating their superiority over the unwashed masses who just want a good book to read. Or, as in my case, a good book to write.

You and I, the people who actually love books, love reading them quietly, curling up and enjoying the power of printed words (or digitised e-ink) to enthrall, illuminate, elevate us, we are just the common man. We don’t count at all. We are not sexy enough to matter to those lofty Levites. Mere Marxists to Maharajahs. At least I am. And I am proud to be.