A reality show pretending to be a feature film -- similarly dubious but more violent, sick and sadistic 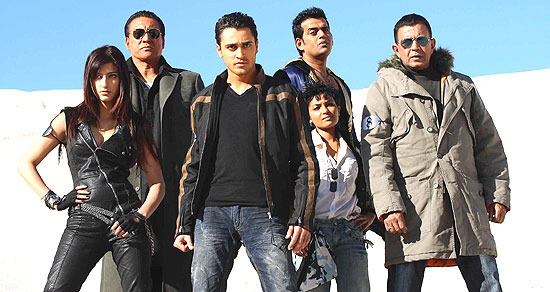 Luck is a reality show pretending to be a feature film. While the entire nation debates on the success and impact of TV shows like Sach Ka Saamna and Iss Jungle Se Mujhe Bachao, Luck plays out a similarly dubious but more violent, sick and sadistic gamble in which a motley group put their life at stake for the most wanted pot of gold.

All of these men and women—Indians outnumber the rest of the world and, expectedly, are left to fight to the finish—are “Unbreakables”, those whom luck favours unreservedly. They are being made to take the chance of their lifetime by yet another lucky boy—Moosa bhai (Sanjay Dutt) through his henchman Tamang (Danny). There is Ram (Imran), a sweet, young boy in a hurry to go to the US, a major with a severely ailing wife (Mithun), a Pakistani woman camel jockey called Short Cut (Chitrashi), a convict called Raghav (Ravi Kissan) and a nubile nymphet Ayesha (Shruti).

The film takes far too long to set up each of the main characters and in giving us their detailed histories. So, by the time real action kicks in, one is already too benumbed and bored to care. The action itself is far from tingling. In between, subcontinental bonding, melodrama and young love is thrown in, as though it were obligatory.

In its heart of hearts, Luck is a very cheesy, B- grade film trying hard to look slick and sophisticated. So, while the dialoguebaazi is a blast from the past, in the name of spit and polish you get South Africa as the rugged backdrop, some fancy cars and helicopters and characters walking with a practised swagger towards the camera in slow motion.

Sanjay Dutt is predictable and deadpan and Ravi Kissan compensates by overacting with a vengeance. Veterans like Danny and Mithun are wasted. The worst deal is left for Roopa Ganguly. The fine actress just lies motionless on a couch as the major’s ailing wife. Imran’s career-graph has been going steadily downhill in an effort to go for the faux-edgy films after a genuinely romantic debut. Thankfully, his pout still stays. Shruti Haasan is miraculously colourless and unimpactful. Only thing that works is the hummable song Khudaya ve.