What prompted Robert Vadra to denounce his father and brother in a public notice: the UP elections or the whiff of a scandal? 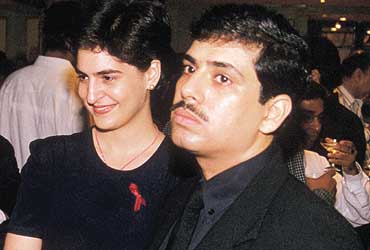 It was an innocuous public notice tucked inside page four of a national daily that sparked off the latest controversy in the Nehru-Gandhi family. The terse notice issued by Sonia Gandhi’s son-in-law proclaimed that Robert Vadra was distancing himself from his father and brother. The reason being the duo misusing the Gandhi name by "allegedly promising jobs and other favours in return for money".

After making capital on the Maneka-Sonia tussle over Katherine Frank’s biography of Indira, media focus was quick to shift to the Vadra family and its antics. Once questioned, Congressmen admitted that both Robert’s father, Rajinder Vadra, and Richard, his brother, had approached them on various occasions for school admissions and other favours. In fact, Congress sources say that it was Maharashtra chief minister Vilasrao Deshmukh who tipped Sonia Gandhi off about the Vadras.

Deshmukh told the Congress president how Richard Vadra had approached him for certain ‘favours’. Sonia spoke to Priyanka and Robert. Other Congressmen—Satish Sharma and Arjun Singh—too gave her counsel. But sources claim that Robert was the most keen on issuing a notice before the "situation got out of hand". Admitting as much to Outlook, Robert said: "No one prompted me. I did not want my name to be misused for any favours." Former law minister Hansraj Bhardwaj’s son Arun was asked to issue the legal notice. Says Arun: "The notice is self-explanatory. The intention is that the public should not be misled."

Once the lid came off, other Congressmen too came forward with their stories. Karnataka chief minister S.M. Krishna too had apparently been asked to help out Richard’s ‘friends and associates’ as were other Congress party officials. A Congress general secretary had been asked by Richard to help his friends get college admissions. Another UP Congressman was approached by both father and son for favours pertaining to school admissions and party tickets. A former Union minister in the United Front government was even reprimanded by an uncle of Robert Vadra for making him wait for an appointment. "Wait until the Congress comes to power!" he was threatened.

Robert’s father admits to having made calls and asked for favours on the strength of the Gandhi connection. Ironically, he sees no duplicity in first opposing Robert’s marriage to Priyanka ("I was not too keen on it") and later using the very connection to serve his friends. Says he: "So many people approach me. If I can help them, where is the problem? So what if my son is not talking to me? I am still his father. I never used his name. I just said I am Robert’s father" (and more importantly, Priyanka’s father-in-law!).

Nor does Rajinder Vadra see any harm in asking for favours such as school admissions. "If a father cannot pay lakhs in donations, what’s the harm in helping him? After all, it’s for a child." A line of thinking son Robert obviously disagrees with. "Where does it all stop? Even if it’s for a school admission, it’s perhaps for someone who does not merit it. I am totally against such backdoor political pressure. Why should my name be misused in this manner?"

The notice thus minces no words. "My client is constrained to issue this notice for putting public at large to notice in order to prevent innocent people from becoming victims." "This advertisement will act as a barricade," says Robert. "All this will stop now. To how many people do you go and explain that they (those demanding favours) are not acting on my behalf?"

But more than the father, it’s Robert’s brother Richard who is a familiar face to most Congress leaders. In fact, he has now become a joke in party circles. As the story goes, when Richard approached a party official, he asked his secretary, "Who’s this Richard? King Richard?" Retorted the secretary: "No. Richard Vadra. Better than King Richard!"

The rumours and allegations apart, the public notice did catch everyone by surprise. One Congress general secretary claims Robert did it to distance himself from his family’s RSS links before the crucial UP elections which of course Robert denies. One of Robert’s four uncles, O.P. Vadra, has donated family land to the RSS-run Saraswati Shishu Mandir in Moradabad. But while O.P. Vadra admits the RSS runs the school, he claims he had donated the land after his two sons died in separate car accidents. Says he: "The school is in their memory. It’s also named after them—Sanjay and Mannu. I needed someone to run it and the RSS offered to. That’s all. My family’s always been pro-Congress."

Others, however, suspect much more than the RSS connection. Congress sources talk of a business deal gone sour. Suggests a party MP: "Perhaps Richard was about to be implicated in some scandal. And before that broke, Robert distanced himself from the family." In fact, a case may have already been filed, prompting Robert to act fast. In his interview to Outlook, Robert says he is aware that Richard had promised ‘certain things’ to some people which will now not be delivered post the advertisement. Even father Rajinder has heard certain allegations about his elder son. The deal, from all accounts, involves a party in Mumbai. When Outlook tried to contact Richard, his mobile phone was switched off and his wife was screening calls on the land line at his rented home in Moradabad.

The Vadra family has never been very close-knit, despite the strong turnout at the Robert-Priyanka wedding. Family sources point to the less-than-excellent rapport between the two brothers. Even Rajinder Vadra says: "Robert was closest to his sister Michelle." Before her death in a car accident last year, Michelle was often seen with Priyanka and even accompanied her during election campaigns. The Vadra children spent most of their childhood in Delhi with their mother Maureen who taught at Tiny Tots school, while Rajinder Vadra shuttled between Delhi and Moradabad.

Robert does see this as an ‘unpleasant situation’ for him, but says he was forced to resort to this measure to save his own reputation. Says he: "I may have hurt my family but such feelings can be mended. But what if we were sued or something? We aren’t in that predicament now as I have put a stop to it with this notice."

Sonia, meanwhile, has instructed Congress general secretary Ambika Soni to send a letter to all Congress CMs and PCC chiefs along with a copy of the notice warning them about the misuse of the family name. But the tussle could still go on. Robert’s father is talking of suing his son for defamation. There is also speculation that Richard may soon be embroiled in some controversy for promising certain favours on the strength of his brother’s link to the Gandhi family.

Robert, who runs his own handicrafts and accessories business, is upset that his relatives could actually be tempted to misuse his name in such a manner. "I want to make it on my own. I have never asked for favours. Why can’t they take me as I am? If love and affection is not enough, then I am very sorry." He hopes that by bringing the matter into the public sphere he has stemmed the rot. Says he: "I have made my statement. I have issued my notice. After this no one will be pushed into granting favours in my name. No one should misuse my name." That unfortunately is the price you pay when you marry into the country’s most powerful political family.

All Aboard! Next Stop, Lucknow