Love, See Us Into A Hall Of Mirrors

On screen, as in life, the many-splendoured thing makes us want to identify with the other 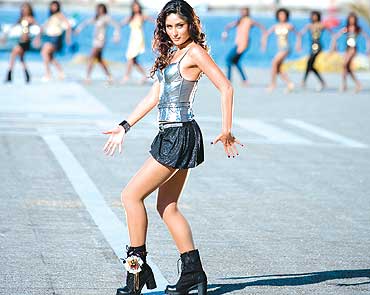 I've been severely disappointed in my lady friends, who come across as intelligent women with common sense but end up making bad choices when it comes to men.

You are puzzled by the irrational perversity of sexual attraction.... Love will never be tidy or safe. Jump in the boat and row for your life.

—Camille Paglia, Advice for the Lovelorn, Among Others

For many of a certain generation, Muqaddar Ka Sikandar—that freestyle (and maybe most successful) reinterpretation of Devdas—represents the first knowing encounter with the idea of romance. As a writer friend recently said to me—everyone in the film is an unrequited lover driven to extremes. Amjad Khan loves Rekha—he breaks out of jail in a jealous rage. Rekha loves Amitabh Bachchan, swallowing a poisoned diamond to save his honour. Amitabh loves Rakhee, but with the silence of the humiliated small-town boy who has misunderstood the friendliness of the rich city girl. Rakhee loves Vinod Khanna. Well, I said, at least Vinod Khanna loves Rakhee back. No, said my friend,Vinod Khanna loves Amitabh! As you think of Amitabh dying in Vinod Khanna's arms, can you disagree?

Muqaddar Ka Sikandar has no fixed 'villain'. If there is an antagonist of sorts, it is love itself—romantic love, which brings people out of their familiar worlds and then won't let them break free of its hold, normally the job of abductively inclined smugglers. 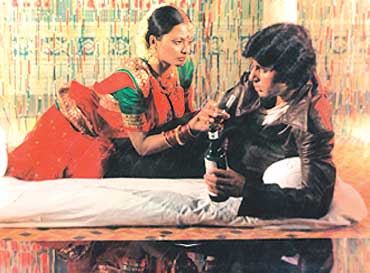 Muqaddar Ka Sikandar typifies what a big Hindi film, when done well, excels at. No matter what the main thrust of the storyline, the film itself gave us the possibility of identifying with numerous points of view to experience many aspects of love. We felt Amitabh's longing for an idealised, impossible love for Rakhee; we also felt the simple charm of Vinod Khanna and Rakhee embarking on an uncomplicated love; and most of all, we were electrified by Rekha when Amitabh interrupted her song and she, the beheld, suddenly experienced the frisson of being the beholder. Passing fluidly from one being to another, we came out of the film suffused by the possibilities of romance. There, we could inhabit each in turn—a voluptuous luxury of the spirit, if there ever was one. 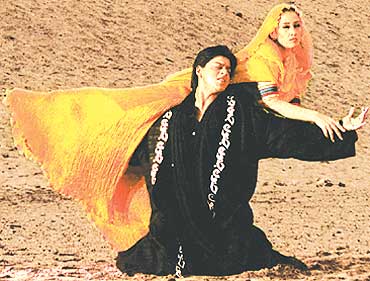 Beyond terror: Manisha Koirala and Shahrukh Khan in Dil Se

This logic of romance was always Hindi cinema's greatest subversion, nestling seductively in the sanctimonious folds of national pride and family values, shrugging aside the public dress of a masculine world for the androgynies of the intimate world, allowing men to know femaleness and women to know maleness, acknowledging the power of beauty and the intoxication of poetry. Even if you denounced the vamp, you identified with the sensuality and the masochism. Even if the heroine irritated you with her submissiveness, you coveted her ability to excite devotion. In songs, the most prim of women mouthed words of knowing passion and allowed their bodies to sway to rather primitive rhythms. Romance allowed us to transgress the boundaries drawn by society.

It's often said songs and romances were a packaging for the nationalist lessons of Hindi films. But sometimes it seems the conservative messages were a packaging for the revolutionary ideas of romance, suggesting that to know the enemy was to find the beloved. Romance was sometimes the sly politics of Hindi films, its world of uncertainty, anticipation and desire countering the certitudes of conservative values and asking for an engagement with difference. Take a film like Dil Se, purportedly about terrorism. Yet the intensity of the love story prevents pat interpretations of the film's political message. Romance subverts the politics of both characters and, in identifying with their magnetic pull for each other, makes us question our politics.

"Should love challenge us or put our questions to sleep?" 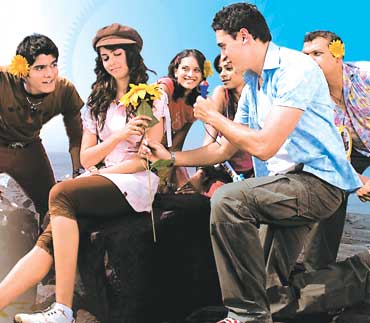 If romance has little of this potent throb in most contemporary love stories, it has something to do with the landscape of amorous adventure and the bodies that now dot it becoming less diverse. For instance, Geet in Jab We Met and Aditi in Jaane Tu Ya Jaane Na are essentially big-city and small-town versions of the same character. They're ingenues, child-woman chatterboxes. Only a churl would deny the sweetness in these stories. But they somehow fail to achieve high romance because these women seem so much more interested in chattering than in sex. There is none of the thrill of sexual awareness, which introduces unpredictability; enters the equation and propels them towards a choice not already permissible.

These are shaadi.com romances, with the controlled randomness of a matrimonial column. Yes, we don't know if we'll find the one, and, when we do, sure, there'll be the excitement of discovering each other. But we can also be certain they'll be more like us than not. There is no invitation in this love to leave that which we have always known. Romance in the middle class is neither adventurous nor sexy. By showing only what is permitted, we can pretend nothing is disallowed and erase the inappropriate altogether.

Of course, Indian heroes, right since Devdas, have always been uncomfortable with the desiring heroine. Heroines have struggled against this—Madhuri Dixit in countless movies, Kajol, who is so foolish and so undone by love in Kuch Kuch Hota Hai, and most recently, Mahie Gill (as Paro) in Dev D. But at least the male ambivalence and fear of sexual intimacy was momentarily cast aside in the presence of the vamp-like figure.

Now that we have only the heroine (the vamps have gone missing), she does look good and wear sexy clothes, but doesn't let on much. Even in an item number, she doesn't seem to act on sexual desire—not even while dancing to 'Zara zara touch me touch me touch me'. She merely displays her body—as if the walking in with bowed head and tea tray has been replaced by strutting her stuff. This is a performance apart from the narrative. It's not her desire personified. These are not vulnerable bodies, destabilised by erotic desire, offering themselves, seeking another's, but boastful bodies like Kareena Kapoor's in Tashan that are not for touching.

Of course, Hindi cinema is vast and diverse, and there are exceptions to every assertion. All the films from the Mahesh and Mukesh Bhatt stable feature dependable romantic elements, such as sexual intoxication, love snatched from the mouth of doom. And where there's Shahrukh Khan—even if he's no longer symbolising the entire sex act with one full-mouthed kiss on the curve of Madhuri Dixit's neck but wearing keds with pants as Suri in Rab Ne Bana Di Jodi—you know there will be a wholehearted courting of obsession and heartbreak. Dev D, with its avid women, has its moments. Oye Lucky, Lucky Oye etches a very tender romance, echoing Muqaddar Ka Sikandar in the longings of the bad, working-class boy for the love of a girl who observes fasts but is not innocent about her power. And Jodhaa Akbar, with the slow pace of eternal foreplay, is of course about both sex and difference, and so, a true romance. Unlike the increasingly hermetic worlds of the so-called love stories, these films are rooted in actual, complex, peopled worlds. And if these worlds do not surround us, what will romance help us overcome?

(The author is a filmmaker and writer.)