Love By Any Other Name 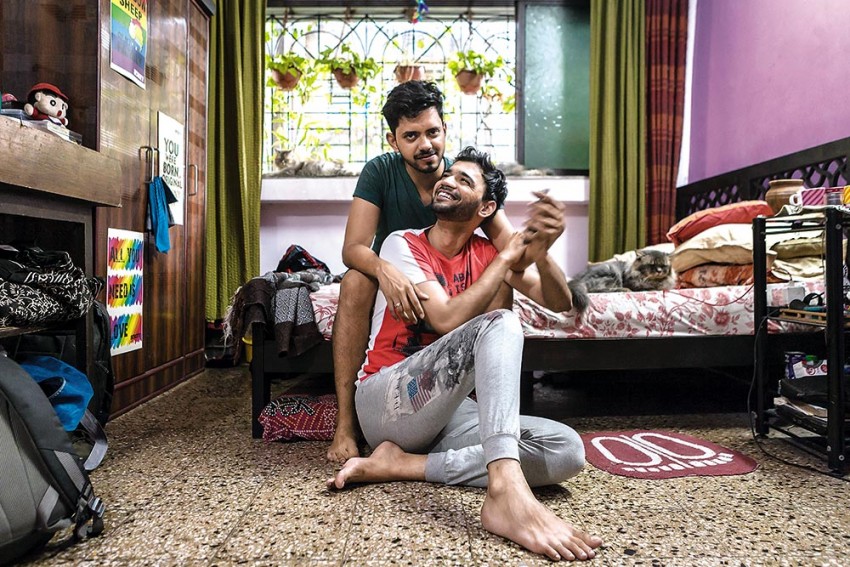 The Mumbai-based marketing professionals were engaged right after Section 377 was scrapped. But not so long, they had plans of moving abroad to escape harassment. “We never envisioned a future in India” says Sanyal. “We still hope to go abroad but it is no longer an escape plan”.
Photograph by Apoorva Salkade 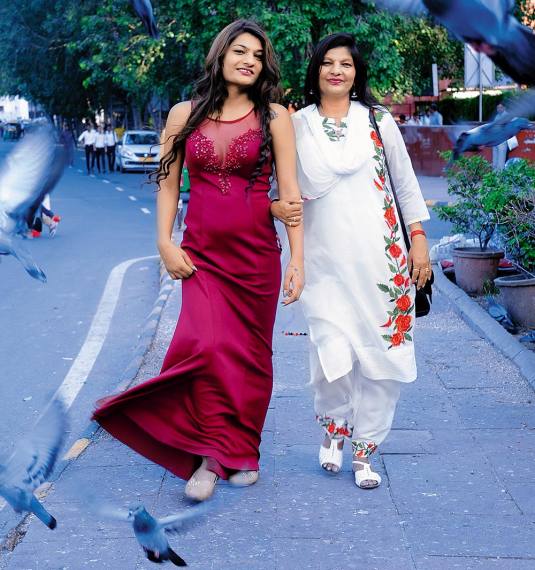 A Transqueen India 2018 contestant, Archie was finally accepted by her mother after the SC verdict. Archie, who underwent a sex-change surgery in 2017 to become a woman, is in a live-in relationship with her partner. “She is my daughter and I am proud of her,” says the mother.
Photograph by Tribhuvan Tiwari 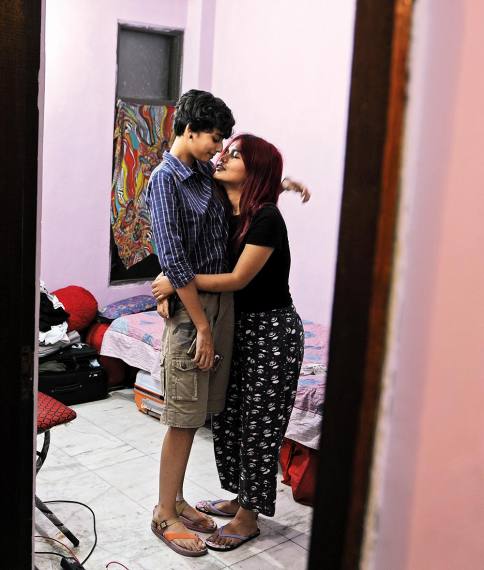 A DU arts student, Bhavya (in blue striped shirt) disclosed her sexual orientation to her father after the SC verdict. “I felt it was the right time to finally tell him. He hugged me but without any expressions.” Bhavya is currently in a “deeply emotional, connected relationship” with a woman (in photograph, left) .
Photograph by Jitender Gupta 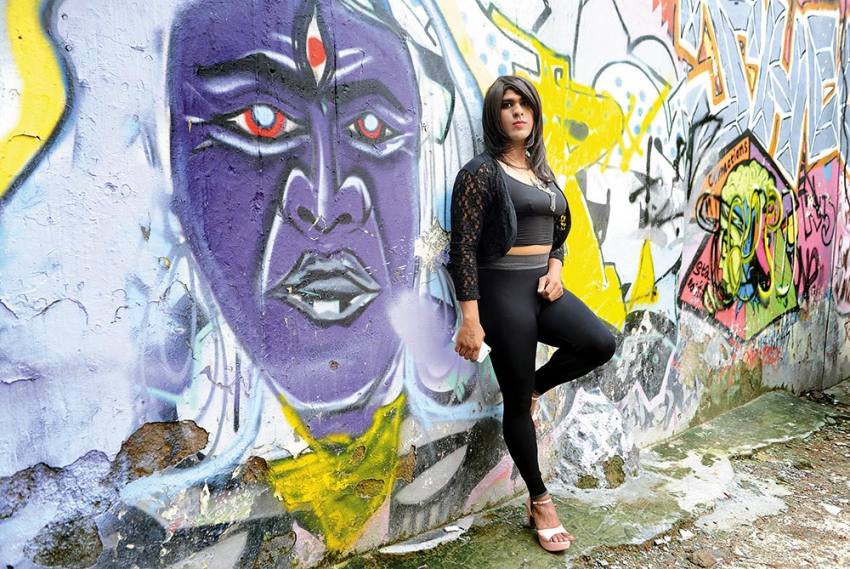 Living a dual life as Akshay and Bruna, the creative head of a tattoo studio in Delhi is yet to reveal her identity to her mother. But she has found support from her office senior. “Immediately after the verdict, my manager asked me to come dressed as Bruna from the next day,” says Akshay.
Photograph by Jitender Gupta 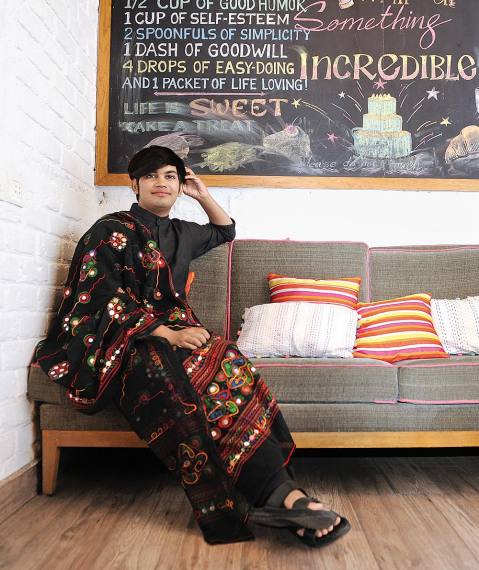 A class 12 student, Rishi was in school when he learnt about the verdict. “I dropped on my knees and howled. I ran around the entire school with a freedom I had never felt before. It felt like I had been shut inside a dungeon for a 100 years and suddenly, I was set free in a vast sunlit meadow,” says the young man who realised he is gay when he was 13. He says he had come out four years ago to his parents but always felt closeted until the verdict.
Photograph by Jitender Gupta 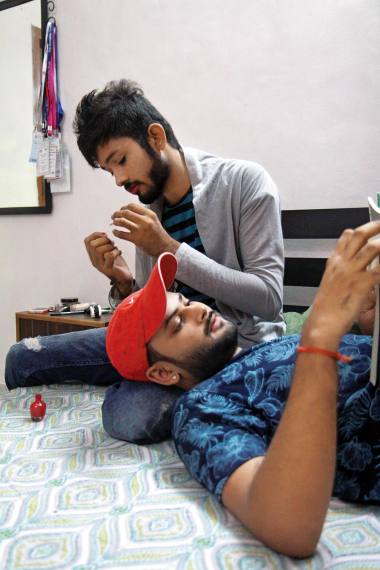 An MCom 1st year student, Pratyunj wore heels in public the day the verdict came. “Nobody said anything. Earlier, I’d receive jibes and threats from random people. I felt like a criminal. Once the police caught us triple-riding a motorcycle. From my body language they figured out I was gay. They started taunting me... threatened to frame me in a case,” he says. “Now, we breathe free. My partner, Syed Nihal (in cap), and I now wear what we want, walk where we want, together.”
Photograph by Naeem Ansari 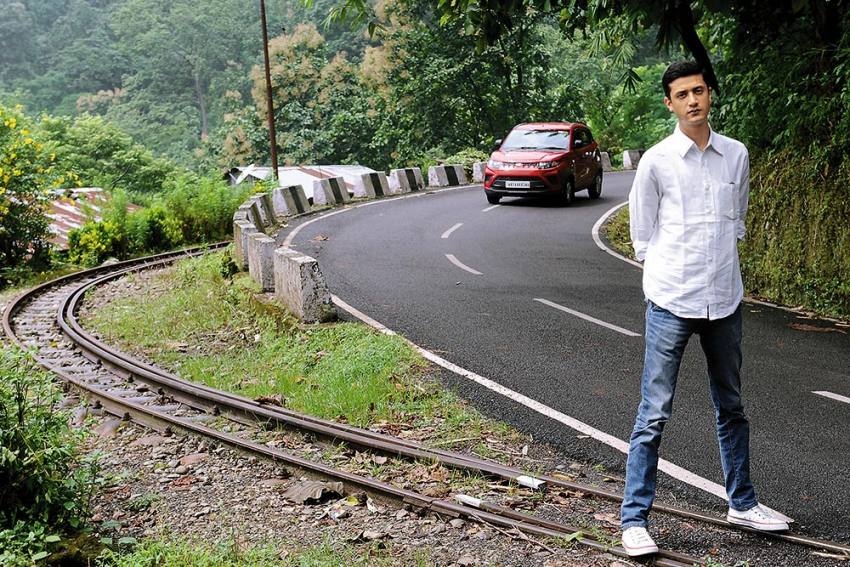 Gaurav worked at Tech Mahindra in Pune and was constantly harassed by a senior officer for his sexual orientation. “I could not raise the issue because she could have come back to me saying that you are an illegal citizen. I had decided that the day homo­sexuality is decriminalised, I’ll write to her,” says Pramanik, who is now on a sabbatical. After the verdict, he wrote about the harassment on Twitter, leading to an outrage, subsequently resulting in her dismissal.
Photograph by Sandipan Chatterjee
Salik Ahmad, Ritika Dubey October 10, 2018 00:00 IST Love By Any Other Name

A university student proudly wore his pair of heels in public. An executive shed the skin of Akshay and stepped out into the world as Bruna. A proud mother posed for a beautiful photograph with her transgender daughter. The rainbow was never so colourful over India.

Just over a month ago, the Supreme Court struck down the British-era law, Section 377 of the Indian Penal Code (IPC), and decriminalised gay sex in India. It was a momentous occasion for the country’s LGBTQIA+ community members who have been battling social stigma and harassment for decades.  The top court verdict restored their dignity and the celebrations were both joyous and poignant as tears mixed with hugs and shouts. Liberated from their shackles, more and more members of the community are coming out across the country.

A lesbian woman in Delhi has come out about her sexuality, and her relationship. A crossdresser in Delhi now wears make-up to work, something he was unsure of doing earlier. Two marketing professionals in Mumbai proposed to each other after the verdict and are now officially engaged. “When you are gay, you get to make two proposals,” says Deb Sanyal, 27.  Children are speaking to their parents. And fathers are embracing their queer daughters.

Despite the victory, an even bigger battle awaits—societal acceptance. Gay marriage is still not legal in India. The rights to adopt children or inheritance are yet to be discussed and lega­lised. A young man in Cuttack, requesting anonymity, said he spoke to his family after the verdict and was accepted by his mother. But she also told him to keep his sexuality a secret until she was dead. There will be parents who will refuse to accept their child’s sexual orientation and take them to doctors and even so-cal­led godmen and yogis who claim to have a cure for “this disease”.

But for many of the LGBTQIA+ community, the court verdict could just be the rainbow they were waiting for at the end of a long, dark night.

By Salik Ahmed and Ritika Dubey in Delhi