You like the film but don’t fall hopelessly in love with it. It’s a film with sense and sensibility; I wish it had more soul. 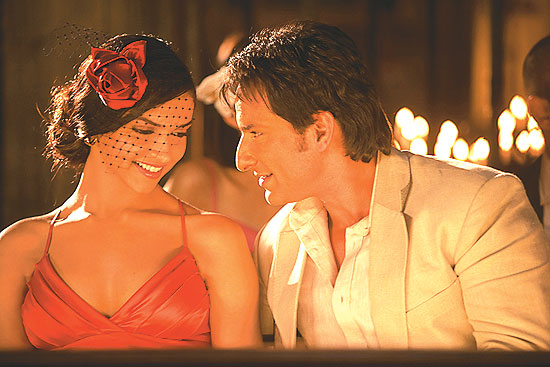 Imtiaz Ali’s films—Socha Na Tha, Jab We Met, Ahista Ahista (which he wrote)—have been journeys where the protagonists travel a full circle to wake up to love. The heroine might call the hero “bhaisaab” (JWM) or the boy will call the girl “behenji” (Ahista...) only to realise later that life had been conspiring something entirely different for them.

Love Aaj Kal is Imtiaz’s most ambitious and carefully considered take on romance. The journey spans three continents, takes us back and forth in time with charming trains (Imtiaz’s favourite motif) run along insipid aircrafts. It begins radically with the break-up of Jai (Saif) and Meera (a suitably held-back Deepika). She heads Delhi-wards from London to work as a conservationist, while he dreams of building bridges in San Francisco. Meanwhile, a friendly chef Veer (gracious Kapoor), seeing them drift apart for pragmatic and geographic reasons, narrates his own love story where distance (Delhi, Calcutta) and familial opposition couldn’t dim his unspoken feelings for Harleen (beauteous Giselle).

Imtiaz uses witty, everyday lingo and creates some delicious throwaway moments. Like how before the jaimala the couple say a casual “Hi”. The post-break-up warmth and banter is novel, when they tell each other all that they could not earlier—how he hates her iPod music, she can’t stand his sister. Being in and out of love is cool and stress-free; more a Facebook status update than anything deeper; but is it just that?

What works against LAK is that it feels too thought-out and constructed. Instead of the rooted, natural feel of JWM, the contemporary love here has the boastful smartness of a typical Hollywood romcom. Moreover, the post-break-up jealousy, the continuing commitment phobia is feebly handled and the resolution is abrupt and unconvincing. The truly romantic moments happen in the ’60s—like the furtive exchange of mishti and chai by the lovers.

A good romantic film—be it In the Mood For Love, Before Sunrise or even JWM—is about making you believe in love. LAK falls short. You like the film but don’t fall hopelessly in love with it. It’s a film with sense and sensibility; I wish it had more soul.