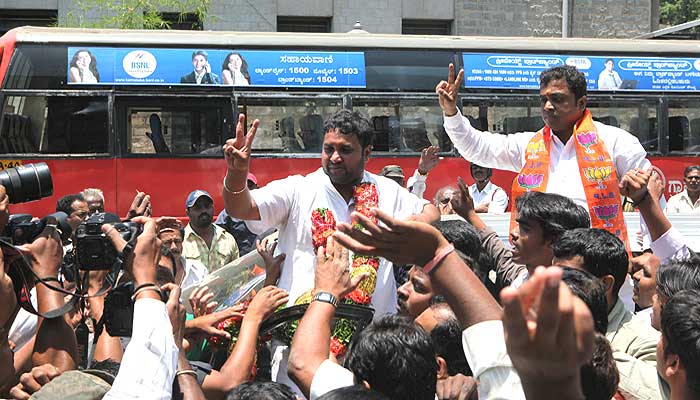 Ever since it was formed in April 2007, the BJP government had been dilly-dallying on conducting elections to the Bruhat Bengaluru Mahanagara Palike (BBMP), the city corporation of greater Bangalore. But when it finally did, it swept the polls by winning 111 of the 198 seats. The Congress could manage a mere 65 seats and the JD(S) had to be content with 15. How did a party so diffident about the polls manage to sweep them? Was it by default or was there some kind of an organisational strategy in place?

In its earlier avatar, the city corporation had just 100 seats and only 15 BJP members; the Congress had always dominated the body. But with the expansion of Bangalore’s boundaries and the formation of a new municipal board, as also the BJP’s winning 17 of the 28 assembly constituencies in the city in the May 2008 polls, the rules of engagement had been  altered substantially.

Even as it tried to dodge the polls, the Yediyurappa regime worked on a plan for Bangalore.

Interestingly, despite its reluctance to hold polls, the BJP had been preparing continuously for them. It was shortlisting candidates and profiling the wards for an eventual showdown at least six months before the event. In many of the wards, there was very little doubt about who the BJP candidate would be when elections were announced, which largely reduced the number of rebels when the final list was declared. The Congress had no such luck. What also worked for the BJP was the ‘decentralised’ decision-making process. Party sources say the 17 city legislators were given a free hand to pick suitable candidates for wards under their constituencies. “This brought in an element of high personal stakes for the legislators; more than 70 per cent of the seats we won were in the assembly constituencies represented by our MLAs,” says a party functionary. The Congress was the principal party in this election as H.D. Deve Gowda’s JD(S) had never claimed a major support base in the city.

A factor that is seldom spoken about but has seemingly paid rich dividends to the BJP in the BBMP polls is its work amongst the urban poor. Says the secretary of the cpi’s state unit, Siddanagouda Patil, “There was a traditional argument being put forward that since the voting percentage was low (44 per cent), it would benefit the Congress, but we have been anxious for sometime...the rss had started working in the 778 slums of the city. They had also tried to organise the slum-dwellers and create leadership among them. Congress indifference is largely to be blamed for the results.”

The other thing the Yediyurappa government did even as it tried to dodge the poll process was work on a ‘development’ dream for Bangalore. This was about snatching away the plank from the Congress, which under S.M. Krishna had taken great pride in creating a ‘new metropolis’. Perhaps Krishna still has that goodwill among urban voters, but he wasn’t around seriously to jog memories.

Besides, while all this was happening, the Congress was in total disarray. It had no strategy in place, ticket distribution was arbitrary. As one Congress leader said, in the name of social justice, even general seats were filled up with obc candidates. The city Congress MLAs did not deliver either. Even in assembly constituencies like Govindarajnagar, where Congress had only recently won a bypoll, there was a total washout. There was also the old rumour doing the rounds that tickets had been sold. When asked about the debacle, KPCC president R.V. Deshpande said: “Nothing’s gone wrong. We’re not sorry about the results. Had Bangalore’s elite electorate come out and voted, we’d have fared better.”