The BJP strives to rise in north Karnataka’s once-busy mining belt, believing that the soot of corruption has settled 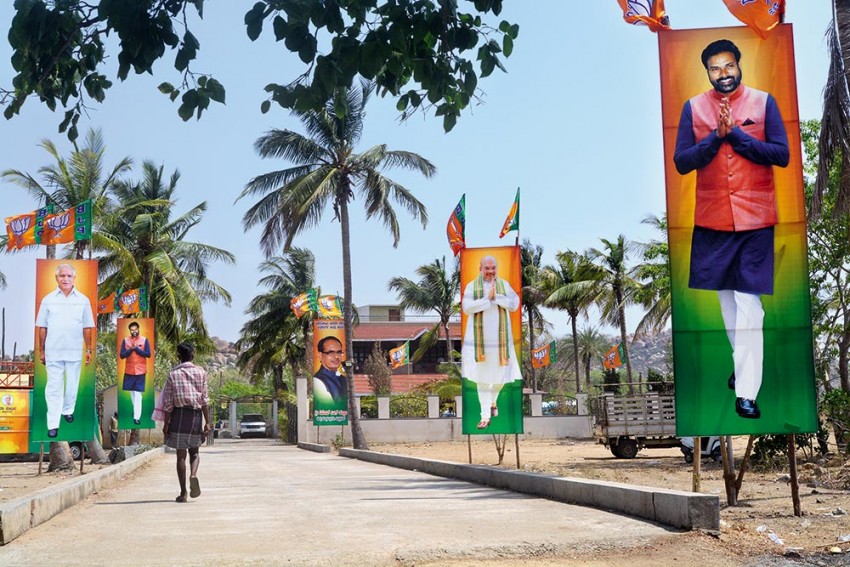 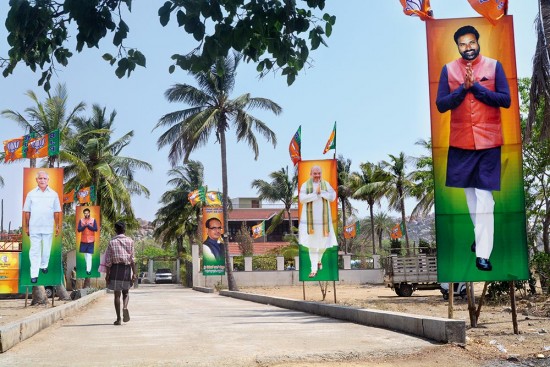 As the low rocky hills of Molkal­muru begin to appear about an hour’s drive south of mining town Bellary, a homestead with BJP flags and flex boards comes into view just off the highway. Outside its gate is an election check-point, keeping watch. A few veh­icles are parked in the grounds, there is a Range Rover in the porch and people are milling around the doorway to the house. Some are waiting inside the living room that has sofas and a big-screen TV on a cladded wall. Upstairs, in one of the bedrooms beside a large and open balcony is G. Janardhana Reddy, the controversial mining magnate who’s making a comeback of sorts as Karnataka goes to elections.

Reddy insists he’s there to only help his best friend B. Sreeramulu, whose star is on the rise in the BJP. A popular Valmiki Nayaka leader, it is Sreeramulu’s job to pocket at least five districts in the Bellary vicinity where the scheduled tribe community is strong. But Reddy’s presence is a throwback to an ignominious past that’s making the BJP top brass noticeably discomfited—one that doesn’t fit into Prime Minister Narendra Modi’s anti-corruption plank. In Bellary city, where Reddy’s brother Soma­shekara is the BJP candidate, the buzz last week among party workers was about party president Amit Shah’s road show in the town centre that was called off at the last minute. Janardhana, of course, can’t step into Bellary where he has a palatial house because he’s still facing illegal mining cases. But he has already shared a stage in Molkalmuru with B.S. Yeddyurappa, the party’s chief ministerial candidate. So, even while the BJP hems and haws about the Reddy connection, there’s no mistaking the Bellary strongmen are back. “The party is “tai (mother) to us, we will work for it,” Somashekara tells Outlook.

Boom town Bellary has changed in the seven years since the iron-ore mining scam exploded onto Karnataka politics. The red dust cloud that hovered over the place is gone and the pace has slowed down. “You would never see these tipper-lorries sitting around,” says a local, pointing to a parking yard. “They would have all been on the road.” Says another: “If people would take out Rs 500 or Rs 1,000 without hesitation, they’ll now think twice before pulling out Rs 50.” At a nearby bar and restaurant, a young waiter from Cal­cutta recounts the story of a past he’s never seen. He came to Bellary less than three years ago by when the crackdown on mining was well in place. But the older lot of waiters have all gone back to their villages in Bengal and built homes. Even though the salaries weren’t great, the tips were, he says. “Their pockets would be empty when they reported to work in the even­ings, we were told. But they’d be full by closing time.” Apparently, the patrons were just as haughty. “Now, they aren’t so. Money doesn’t flow like it did,” he says.

The mining spectre doesn’t evoke sharp reactions here like it does elsewhere. It’s not a forgotten chapter, says a shopkeeper, but he doesn’t think it will bear on elections this time. “Remember, we have been working hard here since 1999,” says Somashekara, formerly a Bellary city mayor and legislator. He is confident that people would remember the road-widening and drinking water plant projects he pushed through during previous stints. “We have won the zilla parishad thrice,” he says. He is hoping the BJP will win all nine seats in the district this time.

Somashekara Reddy is sure that people will remember his projects on drinking water and roads from earlier stints.

“Winning is the only yardstick,” says Tapal Ganesh, a mine-owner who waged a battle against the Reddys. “There are serious charges against Janardhana Reddy. But they have got political exe­mption. The birds have all flocked toge­ther again,” he tells Outlook. Ganesh had joined the BJP when it suspended the Reddys following the scam, but he quit the party a few years ago when it began to associate with them again. He’s now the JD(U) candidate from Bellary City fighting Somashekara and the Congress’ Anil Lad. “If there’s unemployment here, it’s again the BJP to blame. They misused the administration to allow all this to happen. There were no people to take our complaints seriously. It’s because of activists like us the system has changed totally,” he says.

Indeed, the Congress too—even when it decided to reopen the mining cases that the CBI had closed—has made comp­romises by drafting mine owners like Anand Singh and B. Nagendra whom it has attacked in the past. The two are Congress party candidates from seats in Bellary district. In these parts, says T. Venka­tesh, a BEd student, it is the local leaders who have a grasp over people rather than party loyalty. 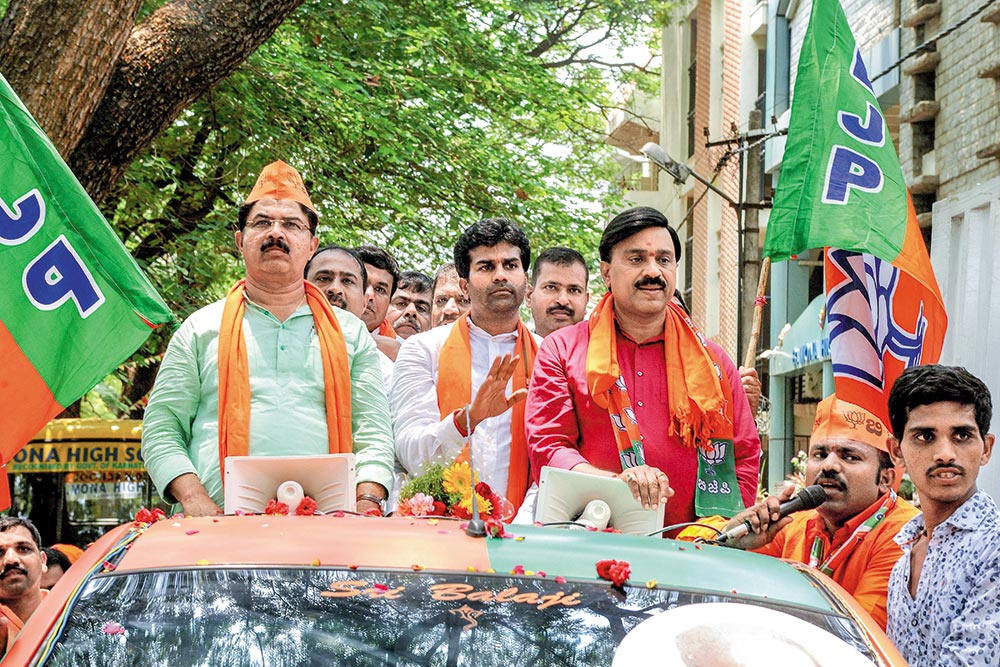 A decade ago, at the peak of the mining boom, the BJP had swept assembly ele­ctions across many central Karnataka districts aided by a Lingayat sympathy wave for Yeddyurappa. But in the next polls in 2013, its voteshare fragmented following a three-way split and the baggage from a scam-tainted rule.

“It is true the split helped us last time. But this time our dev­elopment work will help in getting more votes,” says the Congress’s H.K. Patil, whose assembly seat Gadag (60 km from Hubli city) lies on the highway linking Hospet and Karwar on the coast. “There will be at least a 10 per cent incr­ease in voteshare,” he says. Patil, minister for rural development and panchayat raj, points to the RO plants that have been set up in villages by his department. “Around two crore people were given access to pure drinking water. And, what type of water?” he asks, taking a swallow from a branded PET bottle next to him. “This type of quality water was just a dream for villages and this reaches people at 10 paisa per litre,” he says. Then, he points out to the RDPR’s transparency project that has bagged the Centre’s award three times in a row.

The landscape changes dramatically as you cross the Deccan plateau across central Karnataka and desc­end the steep switchbacks of the Western Ghats downstate to the coast. And, so does the context. It’s here, along the Mangalore coast, that religious pola­risation has been the dominant theme for the past several months. At a rally in Bantwal, chief minister Siddaramaiah thanks voters for returning seven out of eight MLAs in the Dakshina Kannada district in the last elections. Not far from that election speech, standing behind the counter of his laundry store along the highway, Thaniyappa Madiwala is trembling with anger as he gets into conversation. “Did he (Siddaramaiah) even bother to come and visit us when he came to inaugurate the bus stand next door?” asks the ageing, bespectacled man, whose personal story of loss is the tragic undertone of a polarised milieu. His son Sharath Madiwala, an RSS worker, was murdered last year outside the shop. The police had arrested some local Muslim youth, while one is believed to have fled abroad. Just days before the incident, a Social Democratic Party of India (SDPI) activist had been murdered in the area.

“Tell me, what did my son do?” Madiwala asks in ang­uish. Customers are bringing bundles of laundry to his counter but he can’t take them all in. “He used to work overtime to run the shop. I have to manage it now.” Some friends, who have just dropped in, vent their anger at local MLA Rama­nath Rai, a Congress stro­ngman, pointing out that the SDPI has withdrawn from the race in Bantwal only to help Rai in the polls.

Further north, in Surathkal, Ibrahim Bawa, brother-in-law of Basheer, who was stabbed to death in retaliation for the murder of a Hindu youth, recounts the story of another family struggling with tragedy. Basheer had been home for just a year after working for 25 years in the Gulf and he was barely making ends meet. “They were baying for blood, anybody’s. He became the victim,” Bawa tells Outlook.

The CPI(M) candidate Muneer Katipalla says people have realised that communalism is a business.

What they say about this region being a tinderbox is true, says Muneer Katipalla, a DYFI leader who is now the CPI(M) candidate in Mangalore North. The anti-Muslim feeling is deep but it’s equally true that the SDPI and its parent Popular Front of India too have grown stronger, he says.

South of Mangalore, at Ullal, a stronghold of Con­gress leader U.T. Khader, things appear quiet at the BJP election office located in a large vacant building. But there’s plenty of work going on, says a local functionary, pointing to a list of 60 names and numbers he is holding. It’s part of a large list of people who signed up for party membership sometime ago and there is a call centre reaching out to all these people now—these will be divided into three groups: A, B and C, depending on how they respond. Then there are the page pramukhs who follow up at the booth level. “That too has A, B and C,” he smiles. The difference this time, he says, is that RSS workers are directly involved in election work, not just along the coast but across the state. “The Congress is trying to replicate this, but they can’t do it like us,” he says. “We have never lost badly in the coastal belt earlier, but last time we won just one seat in the Daksh­ina Kannada region,” says Sharan Pump­well, a VHP leader from Mangalore. “Hindus have been the target of attacks and that’s the issue we are raising.”

Most people would concede that there is a tough race in the coastal area. “Over the past 10 years, people have realised that communalism is also business in one way,” says the CPI(M)’s Muneer Kati­palla, pointing out that every big party has made compromises. “Elections have been fought and won on communal iss­ues in the past. But if there hasn’t been a communal flare-up in recent times despite all the provocation, it’s because people know they are the sufferers in the end.”

By Ajay Sukumaran in Bellary and Mangalore