Lost In A Pile Of Cash

Corporate salaries are scaling up along with the economic boom 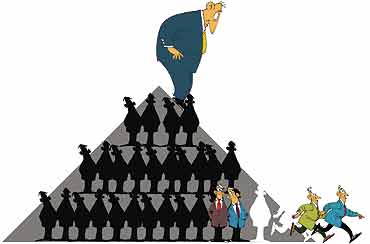 outlookindia.com
-0001-11-30T00:00:00+0553
LG Electronics India's otherwise unflappable HR head Y.V. Verma is worried these days. In the last six months, several experienced and key managers have quit the company. Nothing unusual, but Verma's concern is that he hasn't been able to stem the tide despite average salary increments of 21 per cent (2005), much higher than India Inc's average of 14 per cent. "When others offer double our salaries, one cannot do much to prevent people from quitting," he laments. His plight is shared by HR heads across the country. So, if your CV is already doing the rounds, this may your best time to bag that dream job.

Consistent growth rates of 8-9 per cent, rising corporate earnings, huge investments by domestic and foreign firms, high salary expectations (recent surveys by global HR consulting firms like Hewitt and Mercer point out that India will witness the steepest average salary hikes in the world at 14-17 per cent), have made this a boom market for employees. It's turned out to be a headache for employers. Traditionally, the BPO and IT firms had frequently battled with the "quit factor" with attrition rates of around 50-60 per cent. But today, even the manufacturing sector, which was insulated from large-scale movement of employees, isn't safe anymore. Although firms like L&T, Aditya Birla Group, Tata Steel and Maruti publicly peg their attrition rates at below 10 per cent, sources say the actual figures are in the high teens.

In fact, companies are finding it easier to keep the consumers happy, rather than their employees. "Everybody's feeling the heat. Earlier, a manufacturing firm was losing employees to rivals. But now, executives are moving into (unrelated) areas like banking or retail with ease. The whole (job) market is your rival as far as attrition is concerned," says Sharad Vishvanath, practice leader, Hewitt India. "There is mayhem in the job market. There is such a mad rush to recruit that companies are forgetting the basic search fundamentals like matching the candidate's career objectives with the organisation needs, and employee reference checks," rues Gurdeep Hora, managing director of the Delhi-based recruitment firm Synergy Consultants. But he isn't complaining as his clients have started entering into 2-3 year deals to get a perennial supply of professionals.

So, corporates are grappling with recruiting, and more importantly, retaining their best talent. "Talking to business leaders in the country, you would realise that talent retention and attraction are their biggest challenges these days," admits Y.M Deosthalee, director (finance), L&T

At L&T, one of the largest infrastructure and engineering firms in India, fast-tracking promising talents is helping to contain attrition. According to Deosthalee of L&T, if a junior executive in the project management team is considered to be a bright prospect, his career is mapped and the competency gaps are identified. The employee is told that he has a chance to become the head of a business unit in the next ten years provided he follows the roadmap laid out by the firm. Similarly, a junior chartered accountant with identified leadership potential is given greater exposure to mergers and acquisitions and global accounting practices.

"We also realised that the traditional cost-to-company model of compensation is not going to work. At L&T, employees can now design their own pay packages," explains Deosthalee. For instance, an employee not interested in superannuation benefits can cash out that component as part of the salary. There are also instant cash rewards to go along with yearly bonuses. The global demand for construction and engineering professionals is currently booming. According to industry sources, the Middle East is witnessing another round of big infrastructure development that is attracting hordes of Indian professionals.

Retention bonuses are another way for mid-level firms to retain talent. Earlier, they were given after an employee had put in 3-4 years in the organisation. "In several cases, even the retention bonus is not working as the salary offered in the new jobs are high enough to neutralise the lure of the former," says Gangapriya Chakraverti, business leader, Mercer India. The employers' solution: reduce the eligibility period for retention bonuses to 18 months. In order to poach fresh talent, a few MNCs have even started offering joining-up bonuses. 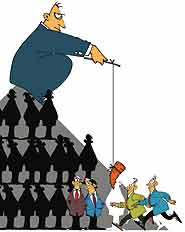 After the technology meltdown, ESOPs (employees' share options) became a bad word among IT employees as stock prices plummeted to below the prices at which the shares were offered to employees. With the Sensex firing on all cylinders, esops are back in vogue. Even manufacturing firms are offering incentives like deferred bonus shares which are given to employees after they put in a stipulated number of years. "At Infosys, there is a continuous focus on alignment of compensation philosophy with business objectives to ensure that compensation plays the role of a strategic tool, not just being an expense. Infosys has designed compensation and benefits packages that're not restricted to cash benefits but also provide opportunities for wealth creation," say a company spokesperson.

In case of BPO/IT firms, where attrition rates are still as high as 40 per cent, new incentives like marital bonds between colleagues are being introduced to increase employee loyalty. So, if you are working for an Infosys or a TCS, and you get married to a colleague, there's a marriage gift waiting for you. In TCS, it's Rs 1 lakh each for the husband and the wife with a foreign jaunt thrown in. In Infosys, it's a new B-segment car! BPO firms like IBM Daksh pursues a policy of not hiring candidates who have a history of frequent job shifts. "Any candidate who has changed three jobs in five years is a strict no-no for us," says an industry source. Mercer's Chakraverti adds that BPO firms are also recruiting agents from smaller cities like Jaipur, Vijayawada, Bhopal and Jamshedpur as the youth from the smaller centres are, as of now, perceived to be more loyal and less inclined to change jobs at the drop of a hat. "It obviously brings to light questions like quality of talent. But it seems to be working for a lot of companies," she adds.

The last time India witnessed stratospheric salary increases and mind-boggling attrition rates was during the dotcom boom of the late 1990s. And everybody knows what followed: pink slips, salary and recruitment freezes, and an overall slowdown of the economy. Nokia and LG fear that indiscriminate increase in labour costs will eat into India's cost-effectiveness. "Such salary levels are not sustainable even in the medium term. Global firms will think twice before deciding on India," says LG's Verma. "The direction of the job market would depend a lot on how many of the new ventures fare. If some of the big-ticket ones fail, there is bound to be a glut in the talent market," warns Hora of Synergy consultants. And according to Mercer, unless some rationalisation sets in, excitement about the India story may begin to wane, and that could have a telling effect on the overall growth too.