IPS officers get an honourable option, while the DMK is calmed 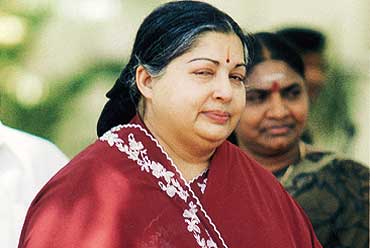 outlookindia.com
-0001-11-30T00:00:00+0553
At a press conference on July 31, the dmk chief M. Karunanidhi took off his shirt to show the blood clots on his left shoulder. "Suspension of the police officers involved is what we want," he said. The next day he got hospitalised. Karunanidhi's display of injuries before the full glare of TV cameras came three days after the Centre and the Jayalalitha government went on a collision course over the issue of transfer of three state-cadre ips officers to the central secretariat. All three—K. Muthukaruppan (Chennai police commissioner), S. George (joint commissioner) and Christopher Nelson (dcp) were involved in executing Karunanidhi's arrest on June 30 and the alleged manhandling of Union ministers Murasoli Maran and T.R. Baalu.

Predictably, Jayalalitha has cried foul, and even before replying to the Centre, has written to all chief ministers to lobby for support against such "arbitrary" transfers of all-India service officers. She also raised the question of the Centre using the rulebooks to bully state governments.

Going by the rules, however, the Centre is on a sure wicket. The proviso to Rule 6 of the ips Cadre Rules says if the "concurrence" of the state is not available, the Centre's word will prevail in such "deputation" transfers. Moreover, according to Rule 7 of All-India Service Rules (Discipline and Appeals), the Centre, if warranted, even has the authority to suspend an ips officer attached to a state. While no suspension orders have been served and the Centre has "elevated" the officers to the cabinet secretariat, it can be interpreted as an exercise of an honourable option as also a symbolic move to keep Karunanidhi and co happy.

No one sees the transfers as an administrative move. Says R.S. Bharathi, secretary, dmk's legal wing: "Concurrence is not required. The arrest of Karunanidhi and the way two Union ministers were handled were unprecedented. So what follows will also be unprecedented. The Centre is asserting itself—if Union ministers are messed with, it will not take it lying down." Jayanti Natarajan of the tmc, aiadmk's ally, is however upset: "This is blatant politicisation of an institution."

There is not even an effort in the dmk circles to say that the transfers are apolitical or routine. At the first post-arrests general council meeting of the party last Sunday, there was a sense of relief that the Centre was acting, finally. But publicly dmk leaders maintain that the transfers are only a "consolation". Suspension is the real thing.

The Centre, after lying low for some time, took Jayalalitha by surprise by appearing to "promote" the three ips officers. A few days prior to this, the Centre had sought the services of R. Rajagopalan to head the National Security Guards. The state police chief during Karunanidhi's regime, Rajagopalan was relegated to a training college by Jayalalitha. He was to take charge in Delhi on August 1, but as of Friday there was no indication of his being relieved.

The state's line is that it can't spare four senior police officers at such short notice. But Jayalalitha has at her disposal a number of ips officers she has deliberately kept unemployed or underemployed. Former city police chief P. Kalimuthu has been on "compulsory wait" for two-and-a-half months. A.X. Alexander, adgp in charge of special operations during the dmk regime, today mans the Mandapam refugee camp—a post previously held by a sub-inspector. S. Kumarasamy, another adgp, is now responsible for the security of a bus depot in Tiruchi. S. Ganapathy, a dgp-rank officer, doesn't even have a table and chair in his present posting at a police academy yet to be built. Says one such punished officer: "Why doesn't the Centre come to our rescue? I am drawing a salary for doing nothing."

Jayalalitha seems to be in a bind over the issue. One excuse that she could use is that she can't spare the officers since they have to appear before the Justice Raman Commission set up by the state government to inquire into the manner of arrest of Karunanidhi and other dmk leaders. "The Centre has given us no timeframe," says Jayalalitha. She can delay events, but she can't stall them.

Safe In These Arms