Lord Of The Crypts

Bala is rescripting Tamil films and its hero. They call him the only original voice. 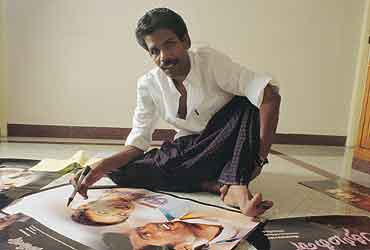 outlookindia.com
-0001-11-30T00:00:00+0553
The opening: A woman gives birth in a crematorium and dies. An old worker supervises the childbirth and holds aloft a baby covered with placenta and the umbilical cord dangling (there's no towel around or an "it's a boy" cry). Then he goes about burning the dead woman as he bathes and bottle-feeds the child.

In this age of 'crossover films' when a music director scoring for some London stage production hogs the headlines, when an actor's fractured leg is the main news on primetime TV, and people gush over Aishwarya Rai on Time's cover, someone sitting in Chennai and delivering good cinema is bound to go unnoticed. More so, if he is a director who knows little English, no Hindi, and brings with him only the baggage of small-town Madurai experience. Bala, as he is simply called, has delivered three well-crafted Tamil films in four years, and two of them have been mega-hits at the box office.

Director Rajiv Menon raves about him: "Bala is one truly original voice." His Diwali release, Pitamahan (The Patriarch), borders on weirdness with its story of people who live on the fringes of society. We begin with Chittan (Vikram), a vettiyan (cremation ground worker), who speaks no more than four lines in the entire film. In stark contrast is Shakti (Surya), a loquacious village conman. Then there's Gomathi (Sangeetha), a drug peddler. They are all orphans in both a social and a personal sense. The only person rooted in a typical middle-class milieu is a polytechnic student clad in khaki overalls played by Laila, who after bitter/comic run-ins with trickster Shakti falls in love with him. The film is about how these characters meet, bond and are separated.

In his first film, Sethu (1999), which distributors initially refused to touch but which eventually enjoyed a 200-day run at the b-o, the director focused on life in a mental asylum. Says Bala: "I had a close friend of 10 years, a drug addict who was later admitted to an asylum. I created a love story in the first half so that I could explore what happens to someone who turns mentally ill." Bala himself admits to having been on drugs for five years. "The last time I had it was also the moment of awakening. I was hospitalised following an overdose. After recovering, I headed straight to Chennai to the world of cinema." He wonders if it would be okay to write about his habit in Outlook and reassures us that today cinema is his only dope. In Pitamahan, shot in rural Theni, headquarters of ganja production and export in Tamil Nadu, the drug works as a metaphor—a state of being.

In Chennai, he apprenticed with director-cinematographer Balu Mahendra for seven years and came into his own with Sethu, which won the President's Award for Best Regional Film that year. Bala was never a keen watcher of cinema before that. Nor was he good at studies. He managed to clear just one paper of 36 in BA Tamil literature at American College, Madurai. "Since my youth, I knew I wanted to be the captain in whichever circle I moved. I never liked the idea of being employed for a monthly salary. So I decided I should be a director." That he is now the captain is pretty loud and clear. In a massive hoarding of Pitamahan on Chennai's Mount Road, the skinny 36-year-old director's frame dwarfs those of the stars Vikram and Surya. "The producer insisted on that," explains the almost painfully inarticulate Bala shyly.

Pitamahan's strength is its well-defined characters, not really the story line. Chittan, the cremation worker, has seen nothing but corpses being burnt since his orphaned birth. He has a bestial quality and seems beyond language and emotions. He leaves the cremation ground when the old man who raises him also becomes a corpse. Chittan does what he is told to and thrashes anyone who so much as touches him with disregard.Unwittingly involved with the ganja trade, he lands in jail where the effervescent Shakti bonds with him. Shakti is eventually killed by the ganja mafia don and Chittan, who otherwise seems to understand nothing, somehow intuits who was responsible for his friend's death, and in a gruesome climax, sucks blood out of the villain's throat.

However, the film does seem to render the Dalit character of the cremation worker in a rather abstract manner—the noble savage who growls, grunts, even drinks water like a dog, but has a soft underside to him. Bala's cremation worker is a mere prop to embody an abstract emotion—"the animal in all of us". He also gives short shrift to the women. Admittedly, Laila, the heroine, is a mere fantasy character.

Says Menon: "Bala takes the dark side of human beings and travels deep into them emotionally, if not analytically. In Sethu, love propels the already dark hero into a deeper darkness and eventually to damnation. In Nanda (2002), he shows the mother killing her son, like in Mother India. He is a master at recording the descent and decline of the human spirit." Menon also believes Bala is rewriting the Tamil film hero and reversing the 'I walk, people follow' style. He depicts rural and small-town life without romanticising the oppressive feudal elements. Bala's rise also coincides with the belated rise of Vikram as the biggest star of Tamil cinema. With Sethu, Vikram was reborn at 35. Tamil cinema has finally found someone who can play a range of roles without his personality getting projected into the character. Today if Vikram commands a Rs 4 crore price tag, he owes a lot to Bala.

In the '70s, Bharathiraja took the Tamil film hero to rural Tamil Nadu and even made him appear unheroic. And in the '90s, Mani Ratnam made the urban hero address national issues as in Roja or Bombay. Now we have Bala occupying an area in between. According to Menon, Bala, who combines artistry with marketability, comes close to being the only Tamil auteur. "His characterisation is very strong. Ramu (Ramgopal Verma) is the only other person who comes close."

Sitting in his office, Bala seems a little overawed that Outlook would want to write about his work. Did he watch how Tere Naam, the Sethu remake in Hindi starring Salman Khan, violated his film out of recognition? "No, we just sold the rights." Does he have any idea of making cinema for a national audience? Not necessarily. "Anyone can watch Pitamahan and relate to it. Language is not an issue."