Loose Screws In The Tata Wheels

Behind Cyrus Mistry’s booting out was his doggedly independent action, and Ratan Tata’s intolerance of it 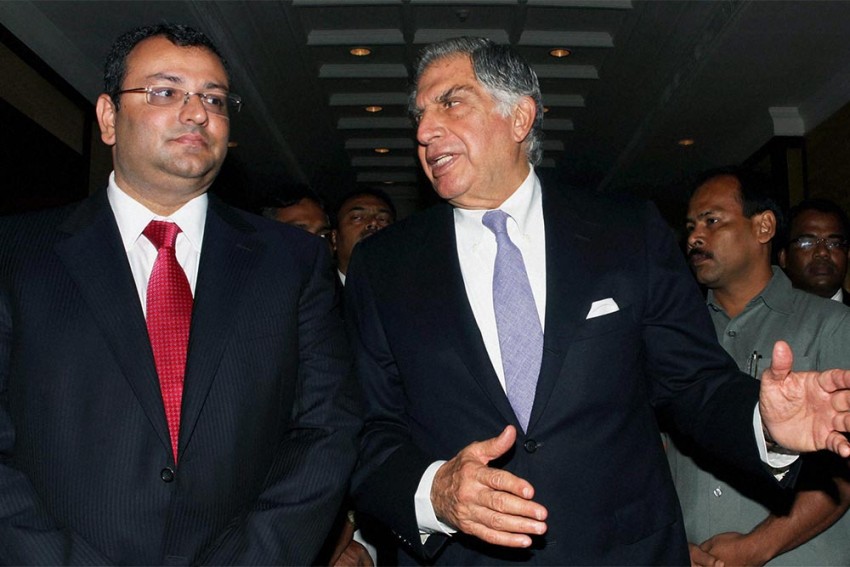 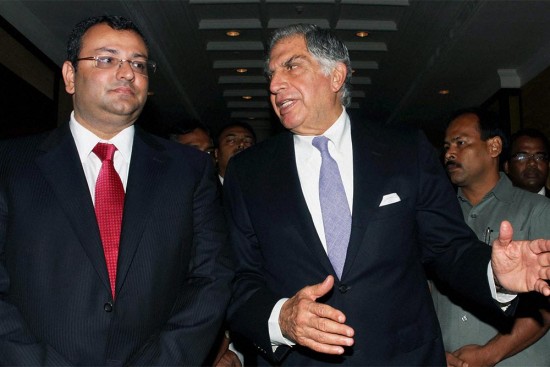 It is a corporate implosion that is being watched with keenness by mar­kets and authorities in India and overseas, for it involves one of India’s biggest business houses. Central to the tussle are issues related to the Tata Group’s corporate integrity, its strategies, governance practices and how professionals are treated.

Various business, political and analyst circles are abuzz with questions about whether the Tata Sons board’s action in unceremoniously removing its chairman Cyrus Mystry followed the best business practices. If anything, it has created a clear divide in the corporate sector. One section feels the Tata Group was right in removing a chairman who was not working in its best interests. The other, much bigger, group feels that Mistry has been wronged, as he was doing all it needed for the group’s profitability and growth.

Says former IIM-A profes­sor and business historian Dwijendra Tripathi, “Obviously, best corporate practices were not followed. Cyrus Mistry should have been given a chance to explain. He sho­­uld have been told about the basis for the proposal to remove him before the meeting was convened. The group’s corporate governance policies would be que­­stioned because of this. The way it has been done will affect the image of the Tata house. Never in its history has the dirty linen been washed in public in this fashion.”

Even though an expert panel is on the job to look for Mistry’s successor, in many ways, things are moving slowly at the Tata Group, as both sides are firing salvos at each other in a blame game and are on the brink of a legal battle. The swords are drawn at Bombay House.

The first salvo came from Mistry, who  shot off a scathing, five-page letter to the Tata Sons board. He stated that he did not have operational freedom and had kept the board informed of his moves at every stage. Most damagingly, he wrote that the group faced a write down of $18 billion, or Rs 1,18,000 crores, because of five unprofitable businesses he had inherited—Tata Motors, Ind­­ian Hot­els, Tata Steel Europe, Tata Power Mundra, and Tata Teleservices, all weighed down with varying magnitudes of losses.

Obviously, all this did not happen ove­rnight. Dark clouds were brewing for the last few months, as Ratan Tata and the board was watching Cyrus’s handling of the group’s companies. Moves for Mistry’s ouster began a few months back, when the Tata Sons board was expanded and his approval was not sought on the new appointments. According to sources, Mistry was asked to be prepared to step down a month ago, but did not relent. A day before the crucial board meeting that removed him, a delegation, including Tata Sons director Nitin Nohria, had app­roached him with a similar plea. Again, he had not agreed.

So what were Mistry’s faults? Clearly, the companies were performing badly under him. Indian steel businesses profits were down 40 per cent and the European business was in loss. Mistry also took the unpopular path of announcing closure of plants in Lincolnshire and Scotland, with 1,200 job cuts. The loss-making Indian Hotels was also to let go many of its overseas assets. Till 2015 end, Tata Motors had incurred nearly Rs 500 crore in losses.

It is clear that Mistry made several dev­­iations from the typical Tata style—a style put in place over two decades when Ratan Tata was at the helm. With many of its firms doing badly, Cyrus’s handling of affairs did not gel with the group elders. Perhaps the last straw was his handling of the steel situation in Europe. Cyrus’s handling of Tata Steel’s interests in the UK and Europe was indeed a sore point. The acquisition of the Anglo-Dutch Corus was one of Ratan Tata’s prized projects, but was widely criticised as a bad acquisition at a high price. Tata did not succeed in rev­iving it and neither did Mistry, who, after exploring var­­ious options, decided to shut down the limping units and sell off the companies. This was not something Tata took very well.

What perhaps set most board members against Cyrus were his moves against some of the projects and companies reportedly close to Ratan Tata’s heart. To begin with, the Nano never took off. Evidently, Nano was low down on Mistry’s priority list, and this did not go down well with Tata.

The other acquisition questioned by Cyrus was Jaguar Land Rover (JLR). Luckily, JLR has turned around spectacularly. However, the company is facing tough times as China, its biggest market, is seeing a depression in automobile sales. Mistry’s handling of the DoCoMo case, where the Tata Group may have to pay upwards of $1 billion, has also gone against him.

Tata entered the aviation sector in turbulent times. Both Vistara, the venture with Singapore Airlines, and the joint venture with Air Asia were driven by Tata, even though Cyrus was chairman. Both ventures are doing badly. In a situation where the aviation sector globally was walking a tightrope, nothing more was expected from the two carriers. Vistara reported losses of over Rs 400 crore, while Air Asia saw losses of about Rs 20 crore.

A person close to the group says, “Cyrus went wrong as his attempt to sell Corus and Indian Hotels proper­t­ies and his approach towards other bus­­­­inesses meant that pretty much all decisions taken by Ratan Tata were wrong. It is a different matter that Ind­ica, Nano, telecom and the power project—every single one was a disaster.”

Cyrus committed more ‘mistakes’. Some Group insiders say that Mistry did not alw­ays inform Ratan Tata or the Tata Trusts—the largest stake holder in Tata Sons—about his moves. What is worse, says one, is that in many instances, Tata was not informed of Mistry’s strategies and decisions and “came to know of them from the next day’s business papers”. Obviously, things came to a boil. Mistry has, however, maintained that he had always kept the board and the Trusts informed about his every move and had got approvals from them.

Mistry’s plight finds sympathy amongst professional managers and analysts who are taking a hard look at the functioning and financials of the Tata companies. Shankar Sharma, chief global strategist, First Global, says, “Cyrus approached the Tata stable from a different mindset. He came from a private company where you are cash flow and numbers driven. So he looked at what was viable and sought to get rid of what was unviable. This is quite different from Ratan Tata’s style, where he would buy a marquee New York property just because it is a great asset to possess.” There is also the question of how much operational freedom Mistry had as he was constantly watched by the Tata Trusts and its lifetime chairman, Ratan Tata.

Despite allegations of poor steering of the Tata group by Mistry, stock market num­bers tell a different story. In the four Cyrus years, the combined market capitalisation of all listed Tata group firms more than doubled. The market cap of Tata companies increased from Rs 4.6 lakh crore in December 2012, when Cyrus took over, to Rs 8.3 lakh crore at present. In fact, the group’s market capitalisation increased by 11 per cent, from Rs 7.48 lakh crore to Rs 8.3 lakh crore in just one year, from September 2015 to October 2016. Barring TCS, the market cap of almost all other group companies registered an increase.

It is also well documented that Ratan Tata did not favour the presence of dynamic and independent chiefs at Tata companies. One of the first things he did when he took over as chairman was to remove all powerful CEOs, like Russi Modi of Tata Steel and Ajit Kerkar of Indian Hotels. It is important to remember now that many of these episodes were also dirty affairs. Is it surprising that any attempt by Cyrus Mistry to stand up and be counted would be thwarted by the Tata establishment? 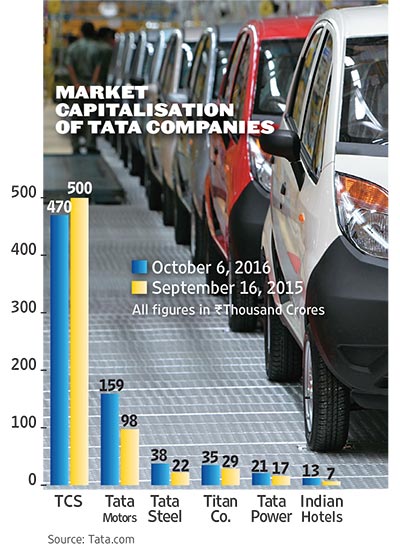 While the board has the right to rem­ove its chairman, the modus operandi in the Tata Sons was undesirable. Already, questions are being raised about the way in which Mistry was ousted—the Tata Sons board’s action without putting it in the main agenda and/or formally informing Mistry. Worse, as Mistry has pointed out, the articles of association of Tata Sons specifies that the incumbent should be given a notice period of 15 days for such a move and a chance to explain his side. None of the protocol was followed. Till date, no official reason has been given by the board for Mistry’s removal beyond ‘non-performance’.

One question looming before the Tata Group is Mistry’s status as the chairman of group companies like Tata Steel, Tata Motors and Tata Global Beverages. Though, clearly, he bec­ame the chairman of these firms by virtue of being Tata Sons chairman, he has been removed only from Tata Sons and, so far, has not resigned as chairman of the group companies. Whether the Tata Sons board will have to pass a resolution to remove him from the boards of individual companies or if company shareholders will have to do it individually is not clear. Expect some legal tangles and play of the companies’ articles of association to follow.

The story of this unlovely scrimmage is still unfolding, as Mistry has his reputation to guard and Ratan Tata has to still justify his move, albeit with the board approval. Which side will give in remains to be seen. So far, no side has sought legal intervention. That could be a matter of time. For long, the Tatas have led the Indian corporate sector, whether in enterprise development or education or social development. All eyes are on the company to see how it resolves this issue of corporate governance.