A foreign fabric has silenced the looms of the local weavers, reduced them to poverty and killed an art 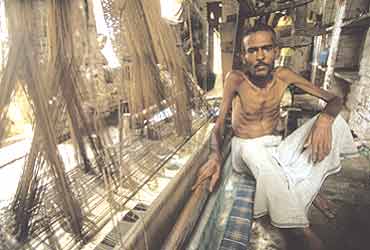 outlookindia.com
-0001-11-30T00:00:00+0553
Raziya Biwi is angry. "My three-year-old son is dying of starvation. My husband lies unconscious beside him. My remaining six children are now beggars. The youngest feeds only on sugar and water as I'm incapable of feeding him." Over the past two years, she and her husband Nurool Haq have done everything from selling her jewellery and a small plot that they owned; the money is gone now and they are starving. "Who knows who will die and who will live?" she ponders miserably.

Raziya and her husband were once the pride of their village. The owner of five looms, he made enough to keep all nine members of his family content. Neighbours recollect how pretty she looked every Id in her best clothes and jewellery. Now she stands in shreds. Nurool is suffering from acute anaemia according to doctors. "But we have no money for the treatment," sighs Raziya. They have been out of business for the last 27 months as there are very few takers for the Varanasi silks they wove for a living.

Three doors away, Mohammed Umair, another weaver, tried being a little more enterprising but to little avail. With no work after his loom owner shut shop and migrated, he began selling his blood. In less than six months, he had sold his blood 13 times. Now suffering from tuberculosis he says, "Sarkar ne to mera khoon bhi kharab kar diya (The government has even contaminated my blood)." Several of Umair's friends from Bajedian village also began selling their blood for cash only to fall afoul of the authorities. "Some doctor leaked the news, we were penalised and the police warned us stating it was illegal," says Rafique, another accomplice.

Others have become even more desperate. In Kotwan village, Ghulam Rasool and Raziya Biwi sold Subhan Ali, their two-month-old son, for Rs 2,000. "At least I knew the buyer—a distant relative who has the means to look after Subhan. The thought that he could feed him was of some consolation," she admits. 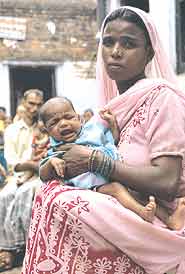 Today with their son back at home, the couple earns from a vegetable shop in the village. "No matter what happens, I'm not going back to becoming a weaver," says Ghulam who feels obliged to the government for getting his son back and paying him a grant of Rs 10,000. "This is a stray case where political leaders intervened as the villagers had created a ruckus about the family's dire straits. But no leader looked into the real problem because of which people are now starving to death in almost all villages," says Atique Ansari, general secretary, Weaver's Association, Varanasi.

The weavers' troubles began way back in 1995-1998 when the Deve Gowda government imposed a ban on Chinese silk yarns. The idea was that Varanasi saris would only be woven from silk yarns from Bangalore. Out of habit or because of its superior quality, some weavers started smuggling Chinese yarn into the holy town. Realising that their need for Chinese yarn would only grow, the weavers demanded an ogl (open general license).

A chronic power shortage was also crippling their activity but one of the most telling blows was delivered five years ago when the government allowed the free import of Chinese plain crepe fabrics. "This decision brought the entire business to a standstill. Now most customers prefer crepe silk to the traditional Varanasi silk because of its smooth appearance and cheaper price," explains Rajan Bahal, general secretary of Varanasi Vastra Udyog.

The flaws of Varanasi silk—relating to colour, texture and durability—are not found in Chinese crepe since they are woven in automated looms. "With power availability and government subsidies, the Chinese can afford to sell the finished product at a lower price, giving the traditional Varanasi silk sari tough competition. Chinese silk traders brought cheap yarn to the local market and decided to replicate Varanasi silk by hiring some weavers from Varanasi," explains Atique AnsariHe adds that the middle and lower middle class prefers synthetic saris from Surat at one-tenth the price of a Varanasi silk sari. The continuous tussle between the Bangalore and Karnataka silk lobby as well as government indifference towards import policy has led to this plight.

In fact, the art of weaving these saris now faces extinction. In Mughal times both Hindu concepts and Muslim ideas were fused to create unique aesthetic designs. The weavers weave the basic texture of the sari on handlooms and powerlooms—both cottage industries where the entire family is usually involved. Normally one person weaves while two others work at revolving rings to roll bundles of the yarn. They create a Varanasi speciality yarn motifs. 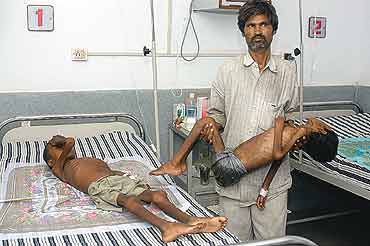 To create these designs, the artist first draws out the entire concept on a graph paper. He then creates small punch cards through which colour threads are passed at different stage as the cards hang on the sides of the loom. Depending on the design, these cards are paddled in a systematic way so that the right pattern and colours are picked up during the main weaving. For a single design, hundreds of such perforated cards are required. A normal sari takes anywhere from 15 days to six months depending on the complexity of the design.

But today an estimated five lakh weavers and their families in Varanasi district are looking for an alternative. Over half have been forced to take up menial jobs like pulling rickshaws. Several have opened tea stalls and paan shops. Others like Abdul Wahi of Rewri Talab and Abdul Ghani of Maltibagh have closed their flourishing businesses and migrated to Bangalore and Hyderabad where they work in looms and help in dyeing and embroidery work. "At least they are better off, but you need money to migrate and contacts too. Here we are all left to starve and die," says Uma Shankar of Madhiapur village whose two children, nine-year-old Chandan and seven-year-old Malka, are undergoing treatment for malnourishment.

An NGO led by Lenin Raghuvanshi is helping the children. "But how many such cases can we attend to?" asks Lenin. According to his conservative estimates, 19 weavers have died from starvation in the past 24 months.

"When reports of farmers' deaths reach Parliament, immediate action is taken. But when weavers are dying in Varanasi, no voice is heard in Parliament," says Raghuvanshi. The plight of silk sari weavers in Varanasi unfortunately seems to come to the fore only before elections. Once electioneering ends, the promises too fade and the poor weavers are left to fend for themselves. And the cityfolk are left wondering why leaders are so insensitive to one of the oldest arts of the country.