Looking Into The Abyss

The blood-feud between India, Pakistan presides over the chasm between them. These essays flesh it out. 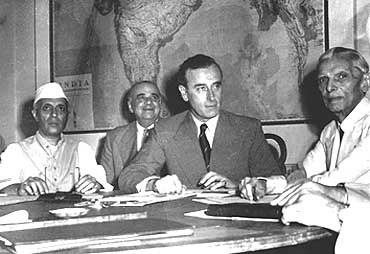 The Great Divide: India And Pakistan
By Edited By Ira Pande
HarperCollins Pages: 380; Rs. 495
The independence of India was also its partition into India and Pakistan. The plot thickened when the world itself was divided into two blocs. The Cold War consolidated the division of the subcontinent, with Pakistan seeking security in the US-led western bloc. India was more subtle: non-aligned but more inclined towards the Soviet Union.

Partition had begun to take shape ever since Hindus and Muslims jointly fought the first war of independence in 1857. Altruism had not guided British interests in India, and after 1857, it would have been less than clever of them not to pursue a policy of divide and rule.

Nothing embodied the evolution of India’s composite culture more than Wajid Ali Shah, the remarkable king of Avadh, patron of music, dance, poetry, plays; choreographer of Hindu and Muslim religious observance. This incredible Hindu-Muslim cultural commerce must have been discomfiting for the British. After the annexation of Avadh in 1856, the unusually popular king could have been kept in confinement. But the British realised that such a powerful symbol of Indian unity had to be banished, far from Lucknow and Faizabad, to Metiabruz, near the headquarters of the East India Company in Calcutta.

During the British period, Muslims, wrapped in a nostalgia of links, however remote, to the Muslim ruling class, insulated themselves in a cultural cocoon.

The Brahmin elite, meanwhile, found it convenient to keep an equal distance from both the earlier rulers as well as the new ones. For millennia, accustomed to placing a premium on the life of the mind, this elite took to English education as one more avenue of ‘gyaan’. They knew it was the ultimate power.

The education-divide between Hindus and Muslims remains the bane of the Muslim minority. It also sets a backdrop for Pakistan’s emergence as a non-egalitarian, feudal, less-developed society.

It was the extended commerce between a young, vigorous culture and one of the world’s oldest civilisations that led to the blossoming of India’s composite culture. A way of life bereft of rigidities, reaching out to all humanity, wearing the aesthetics of Sufism and Bhakti, one that coloured the minds of Guru Nanak, Kabir, Rahim, Nazir Akbarabadi.

Once Pakistan came into being (reinforced by the Cold War), conflict was built into the relationship. The US-Pak military pact of the ’50s helped build an army worthy of a Cold War "Kurukshetra" and also to secure an Islamic Pakistan from a much bigger India, which, in Pakistan’s perception, had complicated matters by adopting a secular creed.

A Hindu India and a Muslim Pakistan would have confirmed two simplified entities in total confirmation of the ‘Two-Nation theory’, that is, Hindus and Muslims constitute two nations.

In obstinate opposition to the reality that India has the world’s second largest Muslim population, Pakistan still claims India’s sole Muslim majority state, Kashmir, which is central to the argument for a multi-ethnic, multi-cultural, multi-lingual, secular state. Kashmir is the central masonry in this architecture, the growing strength of which was witnessed in the recent Lok Sabha polls. The contest between the two states, one secular, the other theocratic, continues to the latter’s sustained disadvantage.

Juxtaposed against the world’s greatest democratic exercise is the stark reality of a Muslim army (and Americans) killing fellow Muslims in Swat, creating a divide between Punjabis and Pashtoons, adding fuel to Muslim extremism. A similar thing, but on a genocidal scale happened in East Pakistan, and was influential in Bangladesh’s creation.

It is this ‘Great Divide’ that the 30 essays in Ira Pande’s collection flesh out. But the space for reconciliation in hearts (on both sides) can grow only if Pakistan’s army and the habitual anti-Pakistan lobbies in India relinquish hate-filled messages. Alas, to complicate matters, there is the shadow of great powers hovering over us. "As flies to wanton boys are we to the gods; they kill us for their sport."

Each one of the essays by writers who have reflected on the subject of the great divide between India and Pakistan triggers trains of thought which can be quite as subjective as mine have been. Ira Pande can be complimented for the selection of themes.

Who Killed The BJP?