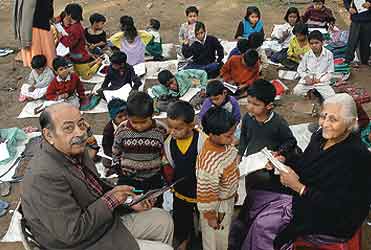 outlookindia.com
-0001-11-30T00:00:00+0553
Most people detest a sedentary retired life. They actively scout for something to keep them occupied. Often, it’s a way to do their bit for society. Take Prof H.M. Kaul and his wife Vimla. After his retirement in ’94, they moved to Delhi and have since tried to better the lives of underprivileged kids. They initially began with a tailoring centre for girls in Madanpur Khadar, a village in southeast Delhi. Within a year, 40 girls had been trained to stitch and some even began earning a livelihood.

A year later, a village elder approached Vimla to do something for the children. Most of them were whiling away their time roaming the streets. Some went to school occasionally while others had dropped out altogether. Vimla started a class for four to eight-year-olds in February ’96 with ten children and hired a teacher—a village girl who had learnt tailoring under her. "Initially, we just tried to discipline them," recalls Prof Kaul.

Gradually, the children began to learn the English and Hindi alphabet and nursery rhymes. By May, a voluntary organisation offered to pay for one teacher’s salary. The Kauls had to fend for the other requirements—from books to stationery. The following year, the number of students rose to 70 and the class had to be divided into two batches. Funds permitted them to afford that single teacher on an increased salary. It was only in ’99 that they had enough support to appoint four teachers.

The older children learnt faster. In a year, 35 qualified to get into government schools. "The more children leave us, it is an indication of our progress. It shows how many have made it to regular schools," says Vimla. In ’99 another 12 children left. In 2000, the class was down to 20 students. "Some of them are topping their class," says a proud Vimla.

Despite the school’s success, space and finance have always been a problem. In ’98 Vimla expanded her work to the housing colony where she resides. But the classes were moved from one place to the other thrice in a year’s time. First, they were shunted out of the colony’s community centre into a park. But residents complained about the noise and hence, they finally ended up in a dirty, dilapidated park in the village. The school continues there and students pour in despite the stink from the nearby garbage dump and stables. It now comprises 107 students.

The funds that were small to start with have dwindled further over time. It’s a struggle to pay the teachers. The Kauls raise money from friends and well-wishers on their personal goodwill. Negotiations with the MCD for space met a dead end.

Despite these problems, 11 students have been absorbed into Sarvodaya schools. "We do the paperwork that includes affidavits to be made in court and pay the limited fee because the parents are very poor and mostly illiterate," explains Prof Kaul. Two children have gone to a public school under the cbse board. Vimla garnered funds to sponsor the fee for her most promising student for five years.

The Kauls are committed in their resolve. "I try to find these children an opportunity to do what I feel is their fundamental right as children of our country," says Vimla. The Kauls can be contacted at: C-203, Sarita Vihar, Mathura Road, New Delhi. Tel: 26944447/9871268033