Sports Look Who Is Cracking The Whip Now!

Look Who Is Cracking The Whip Now!

Both Ganguly tormentors, Chris Broad and Clive Lloyd, hardly went by the book as players 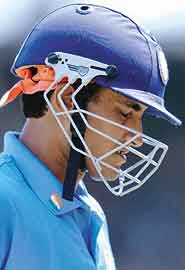 The tale of the discipline enforcers is turning curiouser and curiouser. First there was Clive Lloyd, who handed Saurav Ganguly a two-match ban last November for slow over rate at Eden Gardens. Now, there is Chris Broad.

Both have strictly followed the book. Yet, one cannot shake off the feeling that there may have been a personal element in both verdicts. Broad, going by reports, seems to have taken it to heart that Ganguly did not heed his "warning" after the Jamshedpur penalty, where the captain was fined 70 per cent of match fees for the same offence.

Lloyd was more profuse. "It's obvious that this guy (Ganguly) feels he is above the laws of cricket," he had told Stabroek News, a newspaper in Guyana, after slapping his ban.

One wishes the duo had brought in more of the personal element into its decision-making. Lloyd's fearsome fast bowlers often bowled no more than 11 overs in an hour. Broad, who has become a crusader against the off-spinner's doosra and an unbending...