Foreign minister Pranab Mukherjee's statement on the judicial verdict awarding death sentence to Saddam Hussein ostensibly runs the risk of alienating many friends. The Left is angry, UPA allies sullen, Uncle Sam should have furrowed his brow, and Iraq could wave the minister's statement to complain against interference in its internal affairs. In reality, though, these risks are negligible compared to what Mukherjee's statement hopes to achieve before the UP elections—appease Muslims agitated over the UPA's perceived dalliance with the US.

But first, Mukherjee's statement: "We have seen reports that former president Saddam Hussein of Iraq has been sentenced to death by a tribunal in Iraq. We understand there is an automatic appeal procedure. Such life and death decisions require credible process of law, which does not appear to be victor's justice and is acceptable to the people of Iraq as well as the international community. We have always stood for a peaceful resolution of the problems in Iraq. We hope this verdict will not add to the suffering of the people of Iraq."

His statement, though, didn't satisfy the Left. CPI leader D. Raja told Outlook, "The government could have been more forthright. What is the legality of the process in Iraq when it is under occupation?" Tamil Nadu CM M. Karunanidhi weighed in, saying he was against capital punishment—even to "dictators like Saddam Hussein". 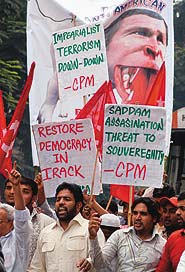 Yet, there's no denying that Mukherjee's statement questions the credibility of the Iraqi judicial process; the phrase "victor's justice" is an unmistakable reference to the US. The UPA, obviously, hopes Muslims will understand it can't adopt the bravado of Opposition leaders. Mulayam Singh Yadav pounced upon the...