The BJP is a walking ghost, the poll results just one more nail... 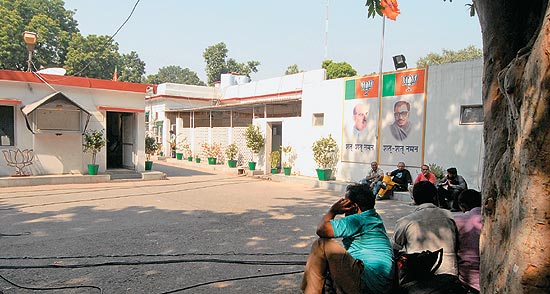 Is it time to start writing requiems for the BJP? This round of assembly elections marked a particular low as the saffron party finally caught the dynastic disease from the Congress. Tickets went in Maharashtra on the basis of bloodlines; it did little good and also lost for the BJP a decisive tool on which it had hinged past attacks on the Congress and regional parties.

The polls also exposed the so-called “galaxy of national leaders”. No one was in demand for campaigning and even Gujarat CM Narendra Modi gave up after a few token appearances in Maharashtra. L.K. Advani is clearly past his glory days and none of the second-rung stars seem to have any fizz. On result day, the party HQ in Delhi wore a deserted look.

Once a shooting star burning bright in Indian politics, today the BJP is defined by all-round incompetence and a lack of hope. Consider some of the responses in the face of the defeat. Maharashtra BJP leader Nitin Gadkari came up with a “we tried our best...we’ll introspect”. In Delhi, Ravi Shankar Prasad stated the obvious, “the anti-incumbency vote was divided”. Mukhtar Abbas Naqvi, the man in charge of the state, blamed the evms and said they had been doctored. And anyway, Naqvi was but a lamb to the slaughter, only given charge of the critical state because no one else wanted to take on a losing prospect.

With the leadership discredited, the rss’s reclamation project should gain momentum. But it’s a catch 22 situation, Maharashtra/Nagpur is after all the Sangh janmabhoomi. A case of one set of losers leading another?

One argument put forward is that the BJP has to get a young, modern face that will appeal to its fast depleting ranks of urban, middle-class voters. But it’s not just a question of projecting a modern face or finding the right ideological issue anymore. It’s the party’s lack of connect to people’s survival issues that is most glaring.