Delhi was its saving grace. Lessons for the party: woo allies, campaign better. 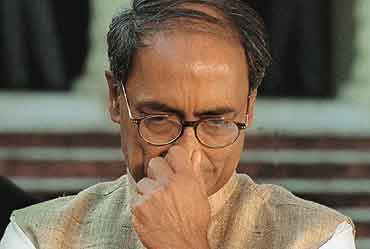 The defeat has driven home, at least to a section of Congressmen, the necessity of engaging potential electoral allies in a brasstacks dialogue, moving beyond its blow-hot, blow-cold flirtations. Besides, younger members of the party are looking for restructuring the party organisation, by enforcing accountability for the failures in the assembly elections. Perhaps the most significant outcome of last week's defeat, party leaders privately admit, could be a growing clamour for the induction of one or both of the Gandhi siblings. A subtle submission that the Family alone can come up with a strategy to deal with the 'Sonia factor': her foreign origin and her political ineptitude.

"We need to look for allies, but there are problems," says Rajya Sabha MP Kapil Sibal. "The BJP and its allies are united by anti-Congressism. Our potential allies, on the other hand, are not natural allies." By that token, anti-BJPism united the Congress and Bahujan Samaj Party in the assembly polls, but the parties failed to arrive at a pre-electoral adjustment. A big mistake, according to some party leaders. "Maybe it was, but the CMs felt that they could do without it," says senior leader Salman Khursheed. He insists the ball is not in the Congress court at all. It's for the allies to come to the table with a credible proposal.