The wild disc-and-pub days are over, as adda in satin lungis gets a name: lounging 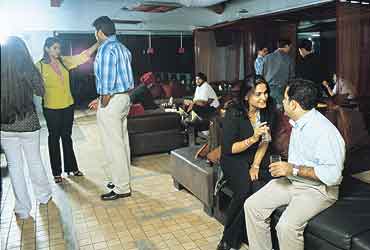 outlookindia.com
-0001-11-30T00:00:00+0553
Vishal Chawla of Ravissant doesn't think twice before turning up at a page-three do in a cool orange sarong. Fashion designer Aparna Chandra can't get through a day without her linen pyjamas and lungis. Gaurav Raina of Delhi-based band Medieval Punditz loves to play at the newly opened lounge and bar Mantra if he's not listening himself, sprawled on a beanbag. Are we finally moving on from a neck-breaking disco lifestyle to pause, stare and take a deep draw of life?

Suddenly, it's hip to be unhip. Our cosmo-metros are now growing a tribe of fashionistas who, after shaking their booty to pop, rave, trance and coke, now just want to sit down and talk. The generation that took the disc-and-pub lifestyle to dizzying heights has now come of age, overcoming its juvenile aspirations to be hip. More important is to be your own self. Just so.

The growth of lounge bars has led to a complementary lifestyle where stress-busting personal comfort is the buzzword. Be it in clothes, makeup, hair-styling, furniture or travelling. It's fadeout for ostentatious, snobby p3p parties, as the trendy zero in on cosy sit-down dinners sans the hacks. Mumbai-based DJ Suketu draws from his own experience: "At more and more private celeb parties I find less dancing, more sitting around—people enjoying music and talking." In other words, just lounging.

Dhiraj Arora, owner of Delhi lounge bar Shalom, feels that our metros have entered the second phase of drinking culture." Now people drink not to get drunk but to enjoy the experience—the drinks, food, lighting, music," says Arora. And lounges fit the bill perfectly. Dimly lit and perfumed, with easy, unstructured furniture and soothing music in the background to wash away your worktime blues, they are also the ideal space to socialise and relax. Lounges are fast cultivating a loyal clientele who frequent them more often than they would a disco or a pub.

Bangalore was probably there first. Image consultant Prasad Bidapa points out that lounge culture took off in the city four to five years ago when a Thai lady opened probably India's first lounge bar, Cosmo Village. Perhaps the reason why ftv also chose Bangalore to open its first bar 'n lounge in Asia. Still the only lounge in the country to have leather-cushioned beds with a small snack board in the middle where you can lie down and sip a refreshing drink and nibble on snacks. Where the line between bedroom comfort and lounge comfort blurs fast.

And lounge bars come equipped with lounge music. DJs describe the genre as one that enhances your sagging spirit and allows you the space to hold a sensible conversation. Lounge music is where electric jazz melts into Carnatic, Punjabi dhols resonate with African percussion and Celtic does a tango with raagas. Raina says lounge music began with the Buddha Bar and Hotel Costes in Paris some four-five years ago, never to look back again. Karunesh, Asura, Nirvana, Narada, Peter Gabriel, Prem Joshua are some of the popular tracks with local DJs. Even the local industry is fast catching up: Times Music recently launched over 30 lounge titles ranging from fashion lounge music compilations to classical Chopin and Beethoven.

Lounge music is also about the crucial difference between the real lounge and the fake. At some of the upstart ones in Delhi, people request the DJ to play