Eena? Meena? Teeka? The name’s one key in a thicket of codes 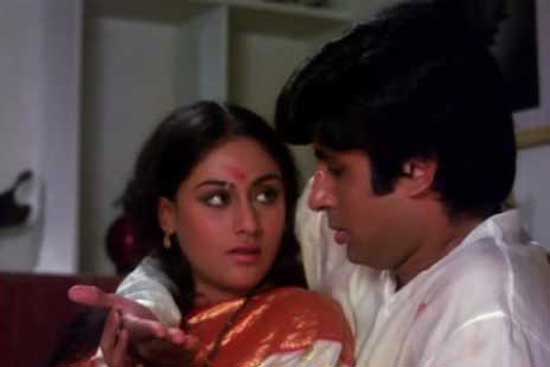 I recently watched Basu Bhattacharya’s Anubhav, one of his movies about marriages gone sour. During a flashback sequence showing the couple (Sanjeev Kumar and Tanuja) in happier days, they are joking around playfully together, and in the next cut Tanuja’s bindi is smudged across her forehead.

We all know what that means: smeared sindoor is the universal filmi symbol for “sex ho gaya”. I’ve seen it before, on Jaya Bhaduri’s forehead in Abhimaan, among others. But it got me thinking. Film is a visual medium, and directors use all sorts of visual shorthand to advance the narrative or transmit aspects of their characters. For me, part of the fun of watching Hindi films has been learning to read this cinematic language and interpret its signs, especially what they convey about women characters.

A corollary of the smudged bindi is loosed hair, often accompanied by a rakishly skewed maang tika. This happens in Lagaan, during the song O re chhori. It begins as a landscape shot. Gracy Singh sits up into the frame, occupying the foreground with a dreamy smile, hair cascading past her shoulders with a pleasant touch of dishevelment. Then, Aamir Khan sits up beside her. Nudge-nudge, wink-wink, say no more.

Filmmakers often populate their films with common character types—the feisty village belle, the racy bad girl, the bindaas Punjabi dadi who has become common of late. And just as often, they use clever visual signposts to let you know the moment she steps on screen which of these archetypes you’re watching. That village girl in the gypsy-style lehenga (often with the Rajasthani-style triple bindi arrayed in a triangle), you know she’s a firecracker even before she knits her brow with fiery gussa. From countless Aruna Irani characters to Hema Malini’s Geeta (not Seeta!) to Jaya Bhaduri sharpening knives in Zanjeer, you just don’t see too many demure, sharmeelee types costumed that way. And if the director wants you to know that a character is a playful, impulsive young woman, you might spot her unglamorously gnawing on a hunk of sugarcane, like Rani Mukherhee in Dil Bole Hadippa, or Kareena Kapoor in Jab We Met.

And of course, nothing signifies the rustic purity of the ingenue better than introducing her in a song where she frolics through a meadow, communing with animals. This Disneyfied coding occurs in older movies like Bees Saal Baad and Madhumati, but occasionally in modern movies too—Mani Ratnam’s Roja introduces its titular heroine with just this kind of song.

If you want to find a mature, hearty, principled village woman, though, look for one pounding spices. These are more common in arthouse or middle-cinema films like Ankur and Namkeen, but wherever I encounter them, I find something compelling about a woman wielding a great big stick. And if you see a woman reading an English book—especially in older movies—you can be sure she is rich and modern, and will turn up her nose at the undercultured hero until he wins her over with his charm. Thus Sharmila Tagore in Aradhana reading Alistair MacLean, and Nanda in Jab Jab Phool Khile, with Lolita(!).

There are all kinds of visual codes alerting us to vamps and bad girls, from tiny miniskirts to the western names that Helen’s characters always seem to have. But of all of these, the most concise is the cigarette: a girl who smokes is trouble, plain and simple. In movies of the ’60s and ’70s, like An Evening in Paris and Sharmeelee, when a misguided, misbehaving sister tried to impersonate her seedhi-saadhi twin, the cigarette was the dead giveaway. A cigarette (and a western outfit) provided the first clue that something was up with the wicked version of Nanda in The Train, too. And visual cues aren’t all that say vamp—these days, some vamps even get their own leering theme melodies, like Kuch Kuch Hota Hai’s ‘Miss Braganza, uh-huh!’ or Dil Bole Hadippa’s ‘Hey, Soniya’.

The rich and evocative language of films packs a whole personality into a few carefully crafted signals, in clever costumes, coded behaviours loaded with subtext, and even sound design. It’s been a pleasure for me to learn to interpret its signs and symbols.

(Carla’s been watching Hindi movies and refusing to check her brain at the door since 2005, when R.D. Burman’s music snuck up behind her and clocked her over the head.)